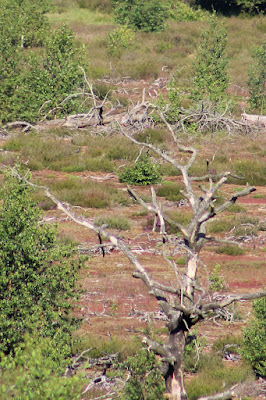 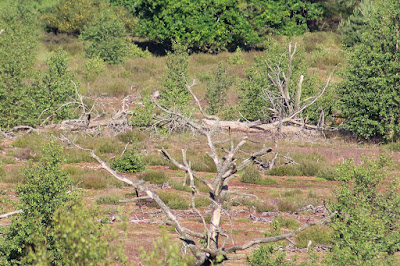 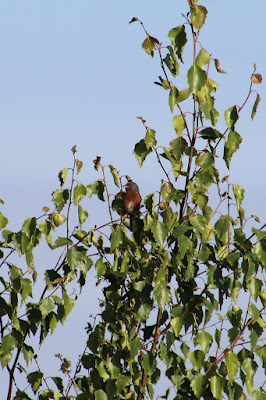 Also here were Swifts aplenty, Woodlark, Linnet and a couple of Common Tern that flew in between the two Frensham ponds. The sun was shining. It was already warm at eight in the morning and the birds were singing. Happy days.
Posted by Factor at 20:15 2 comments:

A DAY OUT IN NORTHERN FRANCE

I was in the Channel Tunnel heading for France for a day's birding when most other birders were queuing up to get into the car park at the Church Norton chapel near Selsey last Sunday.

My timing has always been impeccable and last Sunday was a case in point. I'd booked a space on the Eurotunnel at Folkestone the morning before, only to discover later in the day that the first Elegant Tern had turned up in Britain. Not only that but a Surrey tick Red-footed Falcon was flying around the heathland at Frensham Ponds.

I had planned the day trip across to Calais in the hope of finding some decent birds while everyone else was hoping June would pass by quickly and into autumn.

I'd heard so much about the quality rare birds you can find along the northern French coast, I had to go for a look myself. The one snag was I had never been birding in this part of the world before and had to rely on what proved to be an excellent and reliable site online, http://www.birdtours.co.uk/tripreports/france/calaise/calais.htm.

Having dissected the info at length I opted for the Somme region and three sites in particular – Sailly Bray, Crecy Forest and Marquentere.

It only took about an hour to drive to Sailly Bray, and while it is in the middle of nowhere, I actually found it quite easily. The target here was for Bluethroat, as this is apparently one of the best places to find them, Savi's Warbler, Marsh Warbler, Golden Oriole and Blue-headed Wagtail.

A marshland area with tall trees along the track leading off a picnic area and the road alongside the site, it was resplendent with bird song.

The predominant songster was Marsh Warbler, plenty of them popped up for a brief sighting, along with Sedge and Reed Warbler. Try as I might, however, I couldn't find a Bluethroat. A distinctive song that broke Marsh Warbler's mimicry was the lovely plaintive song of a Golden Oriole in the tall tree opposite to where I was standing, but frustratingly I couldn't see it!

High up in the blue sky, eight White Stork circled before heading off north, and a female Pied Flycatcher flew into the trees. Definitely an area to come back to with more time.

My next stop was Crecy Forest, a place I read a lot about. While it was a spectacular place to visit, knowledge was obviously essential in such a vast woodland, and I didn't have any. I drove around and parked up and went for the odd walk into the woods, but any hope of finding Honey Buzzard, Goshawk, Black Woodpecker, Golden Oriole, Short-toed Treecreeper, Melodious Warbler, etc was going to be a long-shot (well, for me it was anyway), so after a while I cut my losses and headed for Marquentere, which is where I spent the rest of a hot day.

Marquentere is a well put together reserve, with a visitor's centre, a cafeteria. The reserve itself has plenty of hides and varied habitat.

It wasn't too busy when I arrived at lunchtime and the most obvious bird I sat eyes on as I walked through the pines and on to the reserve itself was White Stork. These fly low above your head as they drift in towards their nests and young. Their nests are strategically placed for visitors to get a closer look. Along with these plentiful White Stork were numerous Spoonbill (I lost count) and Cattle Egret perched restlessly high in the trees. I even saw a Night Heron flying around occasionally.


Also seen during the day were a few Crossbill, four Black-winged Stilt, a Common Crane, four Mediterranean Gull and a couple of unidentified waders.

The day trip maybe didn't reach the heights I had hoped for (due mainly to me being completely incompetent, I imagine) but it is such an easy place to travel to – from boarding the Eurotunnel train to arriving in Sailly Bray took just over two hours – I hope to visit the surrounding area again soon.
Posted by Factor at 08:35 1 comment: