Not much birding to report on during the past 10 days, apart from a brief visit to Oare Marshes last Tuesday on the way back from taking my mum to see my dad in the home in Margate he is currently staying in.

I needed a distraction away from the plight of my old dad, who is still battling with delirium. He has a long struggle ahead and there's no guarantee he will come out the other side. The analogy I have come up with is one where he is constantly trying to climb up a sand dune. The sand is him getting older and his climb is the battle to find a route to clarity in his mind. But the longer it takes the harder it will become.

At this stage we can't know what the long-term prognosis is, but for his sake I hope along the way he finds piece of mind, something he doesn't have at the moment.

So a quick visit then to Oare. The target was the Bonaparte's Gull, probably the same long-staying bird seen there the year before. A sighting would marginally make up for missing the one at Staines reservoir at the beginning of June.

Oare Marshes is great value because, apart from producing good birds, it is an easy reserve to get round. You can scan the East Flood from your car if so inclined.

As it was, I locked on to the Bonaparte's Gull pretty much straight away. It was asleep for much of the time on a small mound before it took a swim around the area. After that it flew over to the mudflats of the Swale estuary to feed.

So that was that. Since then I've trundled around the local patch with just one Common Sandpiper the bird of note, and then this evening took a visit to Staines reservoir for the first time since dipping the Bonaparte's Gull there.

I could have gone to Beddington to try for the Glossy Ibis, but having seen the one near Frensham earlier in the year, Staines was a more relaxed option. And I discovered later that the Ibis hadn't been seen since lunchtime anyway, so I made the right choice.

As soon as I arrived I immediately spotted a Black-tailed Godwit on the west bank of the north basin, along with another Common Sandpiper.

It was nice to meet up with Dominic Pia, who I hadn't seen for some time, and he pointed out a Sanderling on the west bank near to the Godwit, and during the next hour at least eight more Common Sandpiper were seen, as well as at least seven Dunlin. Along with the usual banter it was an enjoyable evening.

What next? Not sure really. This weekend, the weather looks dodgy on Saturday, which may coax a few waders to land nearby, so local birding is the most likely outcome.

A week on Thursday I've the whole day off and also the following Sunday I'm off to Skegness (yes, I pick out all of Britain's most glamorous towns in my spare time) for another stock car meeting. On the way I plan to visit some of the Lincolnshire birding hotspots, such as Gibraltar Point and Frampton Marsh, which is developing into an excellent reserve.
Posted by Factor at 22:43 No comments:

COLLARED PRATINCOLE KICK-STARTS SECOND HALF OF THE YEAR

The Great Knot in Norfolk, Black-browed Albatross (only seen by a few lucky people after the guys at Portland Observatory discovered it) and Black-winged Pratincole (also in Norfolk) have managed to wake the birding world from its slumber of the past few weeks. It is only now things feel like they are back into full swing after what has been a relatively quiet period, particularly on the blogging front.

Is it me or have some birders lost some of their enthusiasm for writing this year compared to previous years? I get the feeling there is a slight hangover effect after last year, which was amazing for mega rarities. Every week seemed to turn up some amazing find somewhere around Britain, but this year, while there have inevitably been some excellent megas out there I've struggled to find anything interesting to read on the blogosphere lately.

It is also probably something to do with the time of year. I for one have lost enthusiasm for chasing around Surrey just to say I have seen a Ringed Plover in the county this year (which I haven't) and I currently write less than ever on birding. There's just not been much to say at the moment, which makes Steve Gales' North Downs And Beyond blog all the more amazing as he still finds interesting stuff to write about. He certainly has the creativity for subject matter and he's even managed to write more by this time than he did during his prolific 2013.

Putting personal matters to one side, for me there has been plenty of other stuff to distract me away from walking the patch. The World Cup, Wimbledon, Tour de France – I've keenly followed all these events – but my biggest problem is actually finding the energy to get up early in the morning to go out birding. I simply don't have much at the moment.

I'm hoping the rest of July and August will be quieter on the work front so I can restore the batteries, set the alarm for 5am and be bright as a button when it goes off.

The one county that has seen more rare birds than in previous years appears to be, surprisingly, Surrey. As always, finding exciting discoveries is down to having more feet on the ground looking for them.

Dave Harris comes up with his fair share of head-turners, although many are in places where public access is not possible. He's had White-winged Black Tern and Red-necked Phalarope, while the Tice's Meadow gang also have had another good year so far with Great White Egret and Spoonbill (as have Beddington) on the list.

Then, of course, Mike Taylor saw the roaming Short-toed Eagle over Thursley Common. Also at Thursley has been a female Red-backed Shrike and a Black Kite. Add a Bonaparte's Gull and Arctic Skua at Staines reservoir recently and you have yourself a decent list – unfortunately, I didn't get to see any of them.

Yesterday was the first chance in nearly a month to have a birding day out. I was planning to go to Northampton for a spot of motorsport in the afternoon (stock cars again) but as a detour I chose to visit RSPB Minsmere first thing.

I have to admit I've never been before and it was a thoroughly enjoyable morning. The lure was obviously the Collared Pratincole, which had been present for nearly a week. It had been spotted once more from the East Hide next to the beach by 6.30am, and was still viewable from there when I arrived.

The handsome Collared Pratincole wasn't doing an awful lot, just sitting around occasionally preening itself, but there was plenty to see to pass the time. More than 50 Little Gull were on the water, as well as a couple of Spotted Redshank, a Wood Sandpiper, a Curlew Sandpiper, the odd Knot, along with plenty of Dunlin, Greenshank, Redshank, Black-tailed Godwit and Ringed Plover.

Add to this list Little Tern dancing around in the air with Common Tern and it totalled an impressive array of species on one scrape.

The Collared Pratincole continued to sit around and I resolutely waited to see it in flight. Thankfully, something caused the terns, gulls and waders all to eventually take off, and for the next few minutes I enjoyed watching the Pratincole show off its impressive aerobatic skills as it was chased by some Common Terns, who clearly didn't like this foriegner on their patch.

Eventually, it landed again but out of view.

It was time to leave, but only after watching the Sand Martin colony feeding young on the sandstone bank near the visitors' centre. 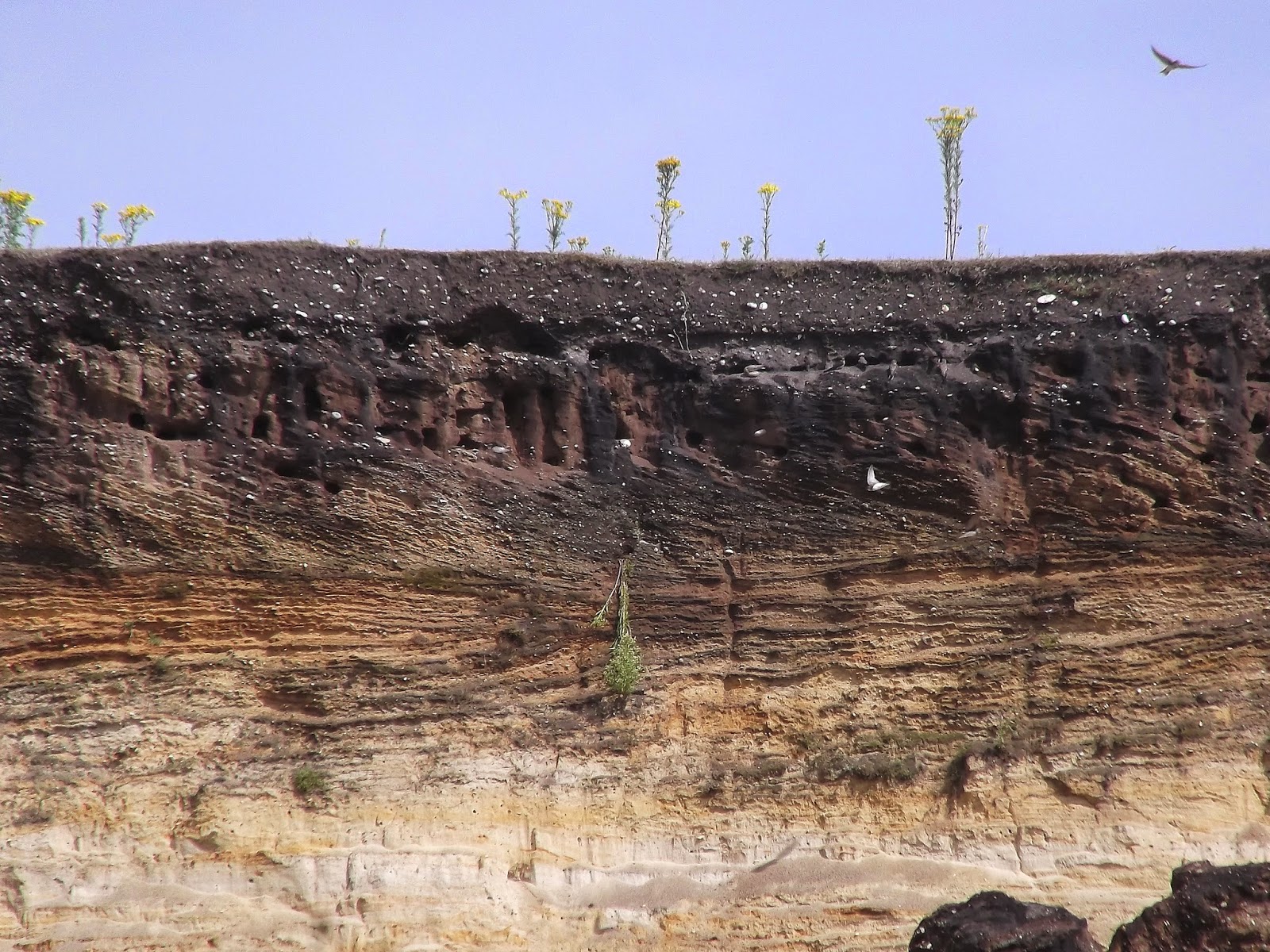 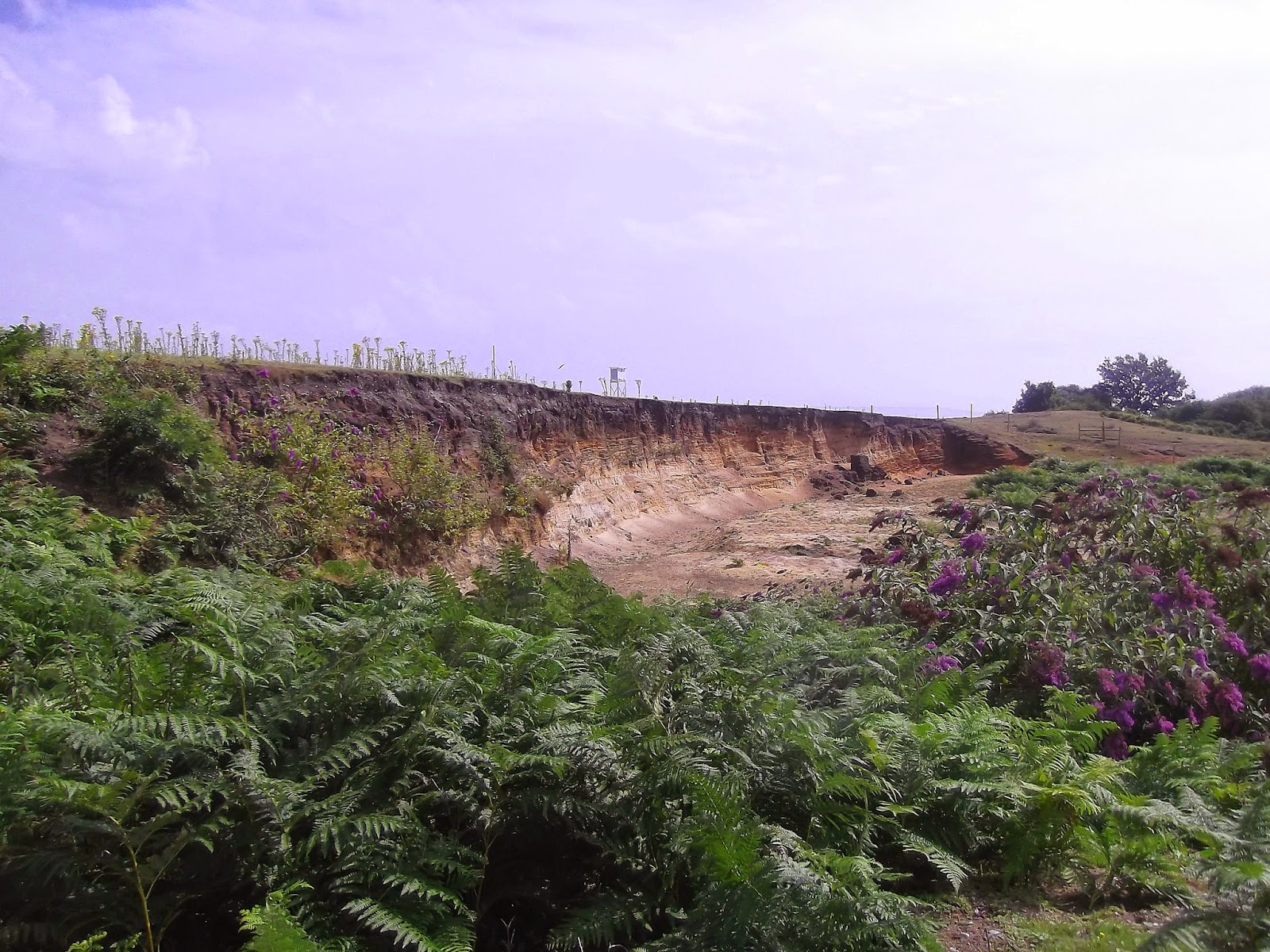 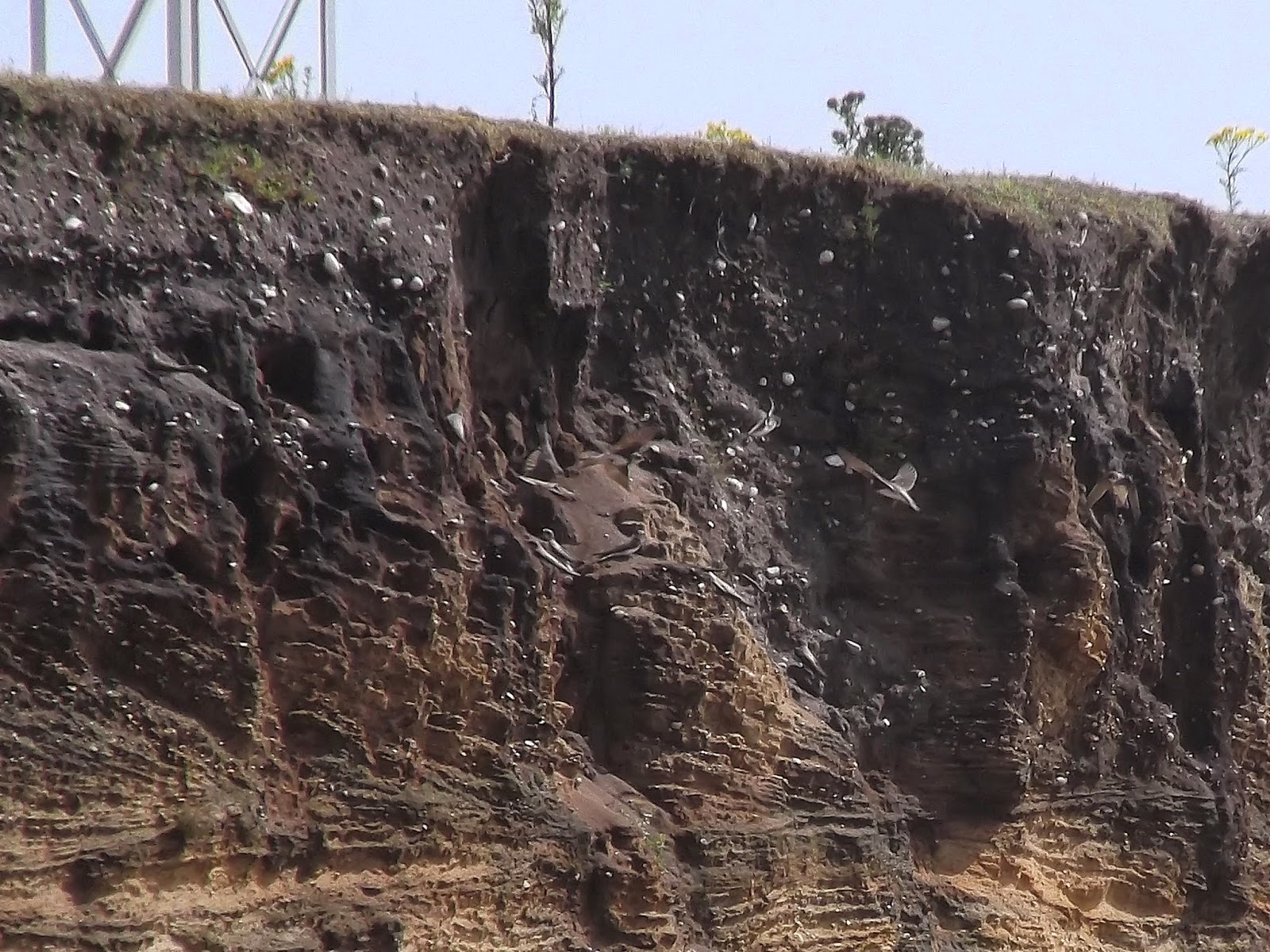 A really good RSPB reserve and one I intend to spend a bit more time at in future.

On the way to Northampton, news came in that the Black-winged Pratincole had been seen again at Ouse Marshes. I could have gone, but the idea of a two and a half mile walk to see the bird put me off.

In September Annie and I are planning to go away for a week to southern Spain (that's the plan anyway) and it will be an opportunity for me to go out in the early mornings to see if I can find Bee-eaters, Rock Thrushes, Booted Eagles and the like before eating and drinking too much by a pool in the blazing sunshine. Sounds irresistible.

The continent is the place to be to see an abundance of bird life that we struggle to see over here. I'm hoping it will kick-start my birding again for when we come back for the autumn migration, which will be in full swing. Another trip to Spurn wouldn't go amiss around then either.
Posted by Factor at 14:35 1 comment: