A beautiful, if late-starting morning but, for the first day in I don't know how long, I was on a trip out to do a spot of birding! I set off two hours late but it doesn't matter. The plan initially was to head for the Sussex Downs and Hope Gap. Plenty of migrant birds had dropped in there over the weekend, notably a Wryneck. Added to which were a few Pied Flycatchers and Whinchats in the mix.

So Hope Gap was the target – until, that is, I stopped on the A23 for a coffee and breakfast and spotted on the RBA website that a Red-backed Shrike had appeared at Cuckmere Haven. It was only a short distance from the car park too – I was feeling lazy, and that sounded a better option. I could always head for Hope Gap on the way back home.

I made the right choice. A short walk down the path towards the sea towards a small group of birders and a brief look up into a dead tree tree and hey presto, a stonking male Red-backed Shrike! It was as simple as that.

It was simple and very pleasant. No stress. All very quiet and relaxed, on a rare gorgeous August morning.

It was found by local birder Bod Izzard. Is he a relation to Eddie? Well, Bob reckons he might be. And, looking deep into the Izzard family tree, Eddie apparently discovered the Izzards may be related to the Pygmy tribe. It makes sense, as Bob is not the tallest...

Also present at the twitch was omnipresent Sussex birder Geoff Gowlett, always good value for a dry comment or two, and Matt Eade, a young local birder fortunate to live in an area where he gets some great birds. He writes an excellent blog seafordbirding.blogspot.com/. 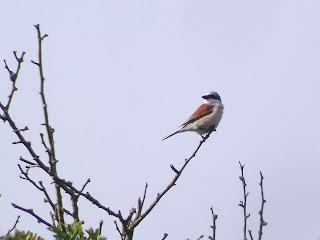 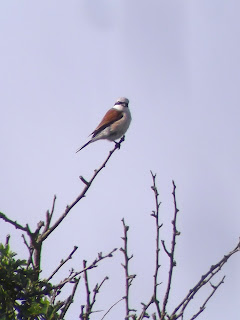 Matt mentioned that he'd been up at Hope Gap that morning and all was quiet – all the good birds had flown during the cloudless night – so Cuckmere was definitely the right choice.

The Red-backed Shrike showed extremely well, despite the presence of a few walkers and holidaymakers walking along the path. Eventually it moved to a quieter area above us but it was always showing well for the entire hour I stayed. A brilliant bird, and unusual to be a male at this time of year. 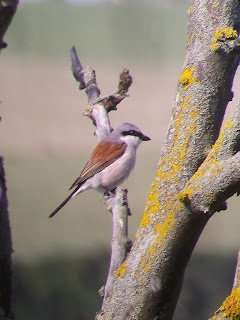 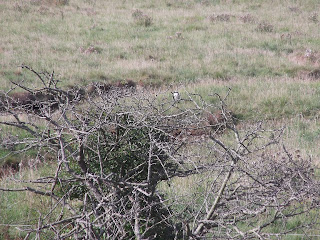 There was discussion with the birders who arrived a bit later of driving to Bexhill to see the Black Stork. This bird seemed too good to be true in as much it has stayed in the urban areas of Bexhill, and had been spotted in people's gardens, and even by the side of the road. Is it an escapee or a bone fide wild Black Stork? Amazingly, it is likely to be the latter.

I decided to have a go at finding it , but took in Shooter's Bottom near Beachy Head first, in the search for Pied Flycatcher. No joy, it was very quiet there, but I did find a Nightingale feeding in the undergrowth.

I then headed off for Bexhill, where I managed to bump into Matt Eade again, who had seen the Black Stork an hour before I arrived. I drove round for a bit, driving past the Cooden Beach Golf Club and back to Collington Lane West, where it had been seen by Matt.

It was all a bit hopeless – a needle in a haystack job – but I drove back round to the beach, where I bumped into two birders who I'd seen at Cuckmere, and Matt also turned up in his car. The bird had just flown over the pub where the two had stopped for a drink just ten minutes earlier and had dropped down west of the golf course.

Off we trundled and parked up with a number of other birders. I stayed for an hour, maybe more, but there was no sign. Stressed started to build. Another of those wretched twitching dips. I'll never learn. Eventually I dragged myself away and headed home. Needless to say, if it is still about later in the week, I'll be back...
Posted by Factor at 23:56 1 comment:

IT'S QUIET OUT THERE!

I haven't actually been out for a proper birding session since that elusive Hudsonian Whimbrel – and that was in the middle of June!

I did pop in at Oare Marshes for about 40 minutes on the way home from visiting my mum last month. The Bonaparte's Gull was nowhere to be seen, but the highlights was spotting two Mediterranean Gull flying in off the Swale and landing briefly on the East Flood before heading off north west, and seeing a Water Rail walking boldly into the open with a pair of nervous chicks doing their best to follow before scurrying back to the safety of the reeds.

I've missed a fair bit – it's a bit shameful to admit but I haven't been anywhere locally all summer, so I haven't seen one Redstart, Spotted Flycatcher or Nightjar, for example. I can't really put my finger on why but other things have taken priority. And I think I needed a bit of time away from birding if I'm honest.

It can take up so much of you time and if you give in to the urge, it can take over from more important things in life. I haven't travelled far at all, apart for a motorsport event last month.

Much of the absence has been due to work, some of it apathy but in recent weeks, it's been shingles!

I went down with shingles two and a half weeks ago and have felt pretty rough ever since. While the rash has gone, the nerve-jangling pain is still there on and off. But the one symptom that is really getting me down is the fatigue.

I'm fine to go to work (although I've just taken the week off) but even a leisurely walk around the local patch wears me out.

Mind you, not being able to walk the patch isn't currently much of a hardship, as there is bugger all to see, or to hear, for that matter.

Gordon Hay, Ian Kehl and Ray Baker have kept me posted on recent sightings - the highlights of which have been a Black-tailed Godwit and an Oystercatcher, but very little else has paid a visit.

I managed to go for a brief stroll Wednesday and yesterday lunchtime, but all was very quiet – almost deathly so. Best sightings were a pair of Kingfisher, a Yellowhammer, three Swift heading south and a pair of Roe Deer in a wheat field on Mercer's Farm.

Still, while the disappointing summer still hangs on by its fingernails for about another three weeks, the autumn migration will then start in earnest, and hopefully I'll be back at full fitness by then.
Posted by Factor at 05:35 No comments: