As March moved into April the spring migration really started to kick in. And I have to admit I've really enjoyed it, or some of it at least.

It all really began for me on Easter Saturday, having missed a pair of Garganey at Holmethorpe swimming around on the Moors pools the day before. There had been a bit of a country-wide influx of these smart ducks but by the following morning these ones were nowhere to be seen.

As time has gone on I've become far more philosophical about missing out on birds, whether local or long-distance. I have accepted the fact I will lose out because of work or simply bad timing or bad luck.

The bottom line is there is nothing anyone can do about a dip. Birders will always dip, whether they have 40 years birding experience or they are complete novices. A dip cares not one jot for a reputation. A dip is unavoidable. But there will be other occasions when a great bird will simply pop up in full view out of the blue and it will be thrilling when that happens.

This actually hasn't happened to me yet – well, not in this country at any rate.

But I digress. I'm not sure why but I'm getting more interested in my local patch. And about time I hear you think. At this time of year the local patch is the place to be as there will be good chance a decent bird will turn up.

On Easter Saturday at last knockings I had great views of 15 Sand Martin, seven Swallow and a couple of House Martin. A walk around the southern end of Spynes Mere also produced a Peregrine perched in a dead tree. A patch lifer.

What I like about this time of year is the anticipation. Early April is when the Osprey start arriving and soon after that it's everyone's favourite thrush, the Ring Ouzel.

Easter Monday was the day spring migration hit fever pitch. Suddenly all around the country Osprey were being spotted flying over. One flew over Leith Hill during the late morning while I was out walking the patch. Then about two hours later at 2pm I thought I had one fly north, but it was very high up and even with the assistance of bins I couldn't really id it with confidence. I couldn't find it in the scope before it disappeared out of sight. Frustrating.

Never mind, it had been a good five hours walking around. I saw my second patch lifer in the afternoon, when a Red Kite flew north over Mercers Lake. Then walking back to the car via the Water Colour lagoons a female Wheatear suddenly appeared on the island on Water Colour lagoon 2. It disappeared before I could get a photo but it was a good way to end the visit.

No Ring Ouzels were reported in Surrey until Thursday April 9, when a male appeared at Staines Moor. I'd been in Oxford with Annie for a hospital appointment that morning and was driving back down the M25 when I rea the news. I dropped Annie off home and at 5.30pm decided to head back up to Staines.

What a nightmare that turned out to be and another lesson learned. The traffic was truly terrible. Gridlock everywhere. By the time I got out of the car, it was getting dark and it was obvious the journey was going to be fruitless. And so it proved. I met up with Mark Elsoffer and Stevie Minhinnick, who hadn't seen it but a walk around the moor produced a flushed bird which may have been the Ring Ouzel. I only got a brief glimpse in the tree it flew up into in the half-light and to my mind wasn't enough to confirm what it was.

I went home angry with myself for giving in to the temptation. It didn't feel right making the effort from the start. When in doubt, don't.

The issue now was I had got a taste for a Ring Ouzel and most of the best sightings were happening not-so-locally in Berks, Bucks and Beds.

Another walk around the patch on Sunday morning wasn't producing very much. I was still even to see or hear a Willow Warbler (where were they?) – I simply hadn't set eyes on one.

As time was pressing on there was nothing for it but to head off along the M25.

The day before there had been more than 250 Ring Ouzel sightings around Britain, with flocks of more than 20 flying over various sites. The Pegsdon Hills near Luton still had nine males on the hillside near Deacon Hill so that's where I headed off to. 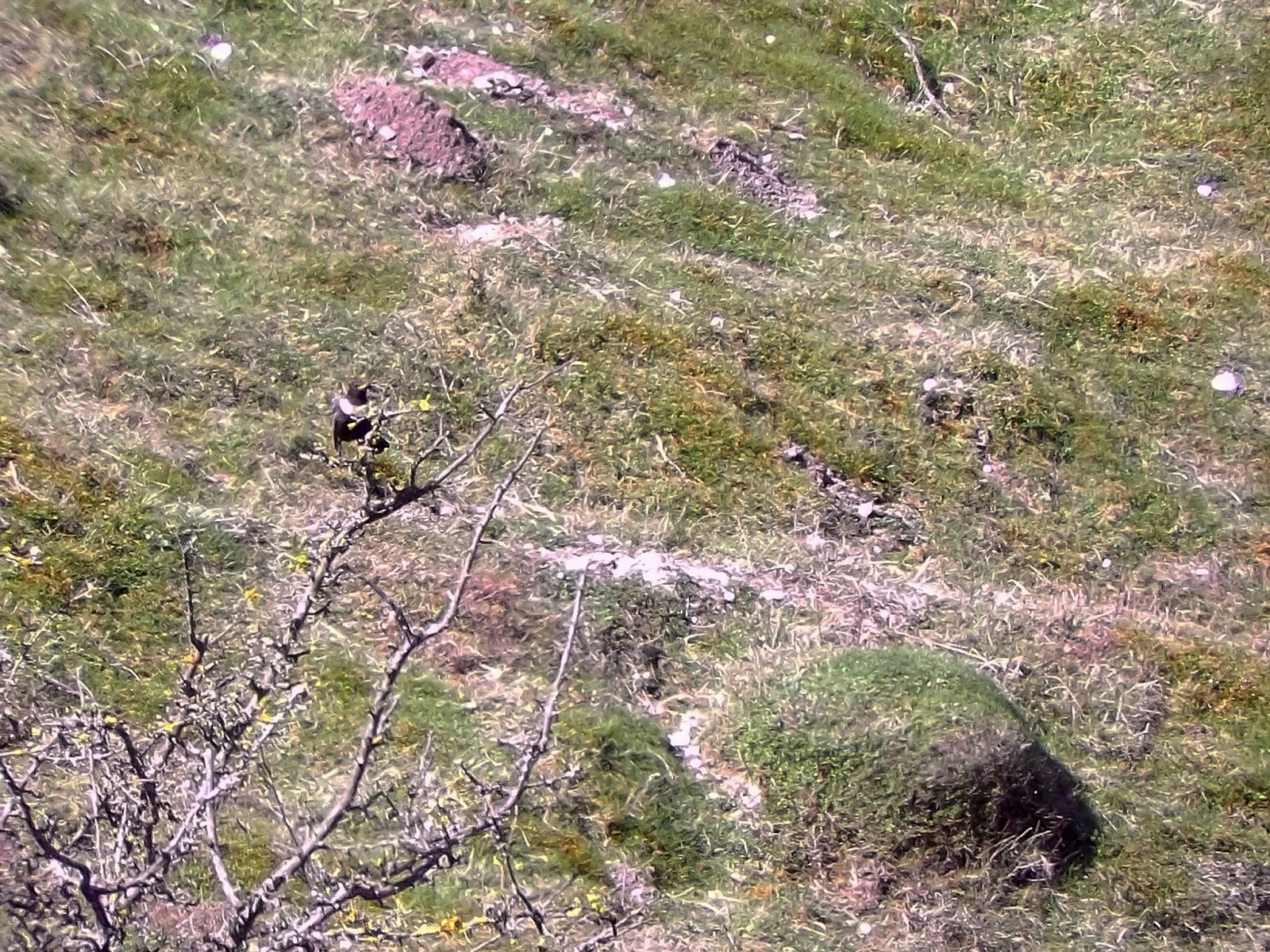 It was a sunny but windy day and the walk up Deacon Hill was hard going in the stiff breeze. The birds had moved further east to a sheltered hillside where I joined Gwyn Williams and Tim Stow, an extremely knowledgeable birder I'd met a couple of years ago at Staines Reservoir. Both were watching the birds. 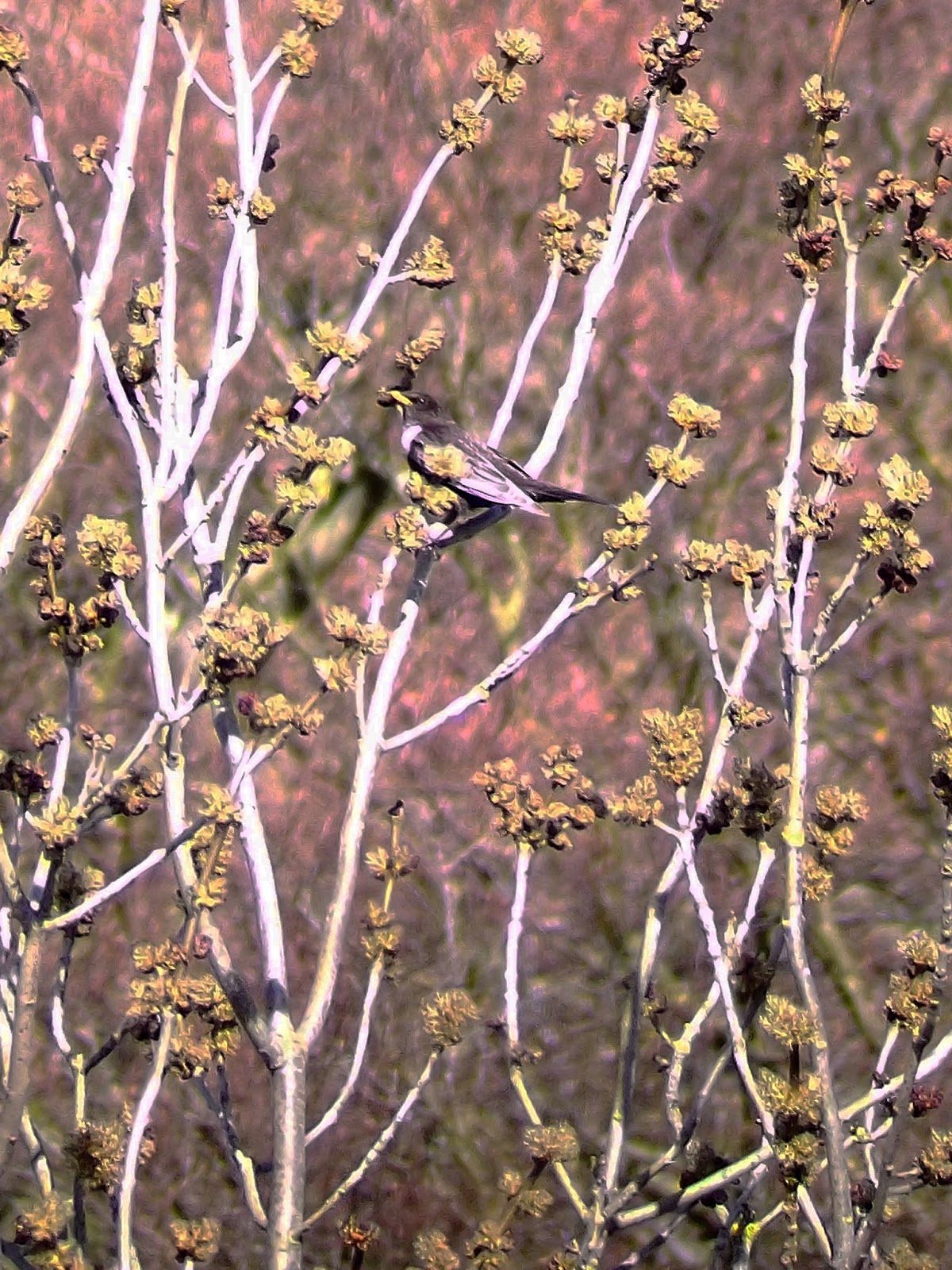 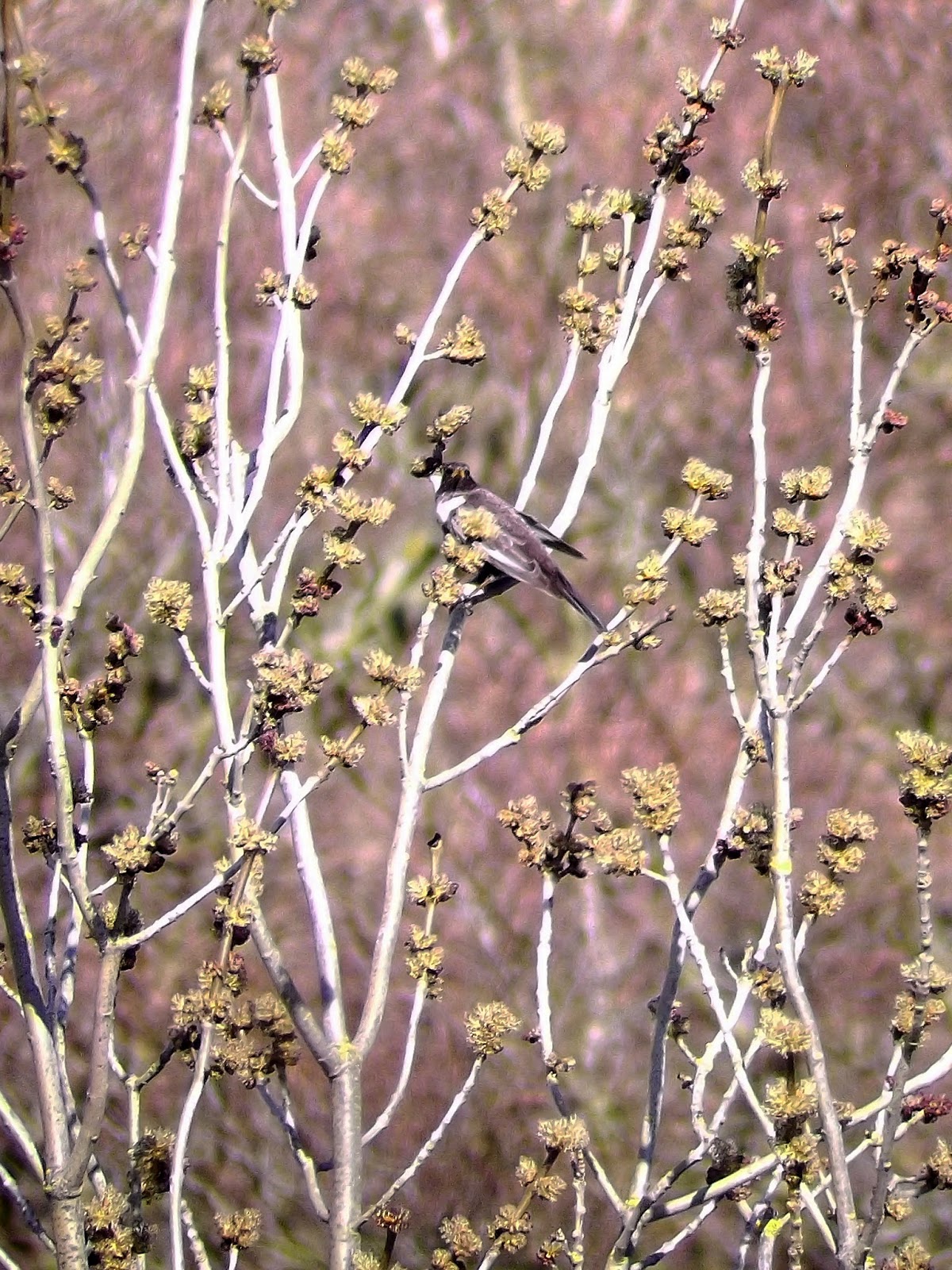 Just as I arrived, a group of walkers – who reminded me of a sketch from the Fast Show – were striding along the bottom of the hillside, headlong towards the Ring Ouzels. Right of queue, they flushed them. Most flew out of sight down the hillside, but fortunately a couple stayed put.

I could now relax and enjoy a Ring Ouzel or two. As it turned out most of the flushed birds returned to the hillside with six confirmed males on view. Great stuff. Also hovering around the area was a Red Kite. 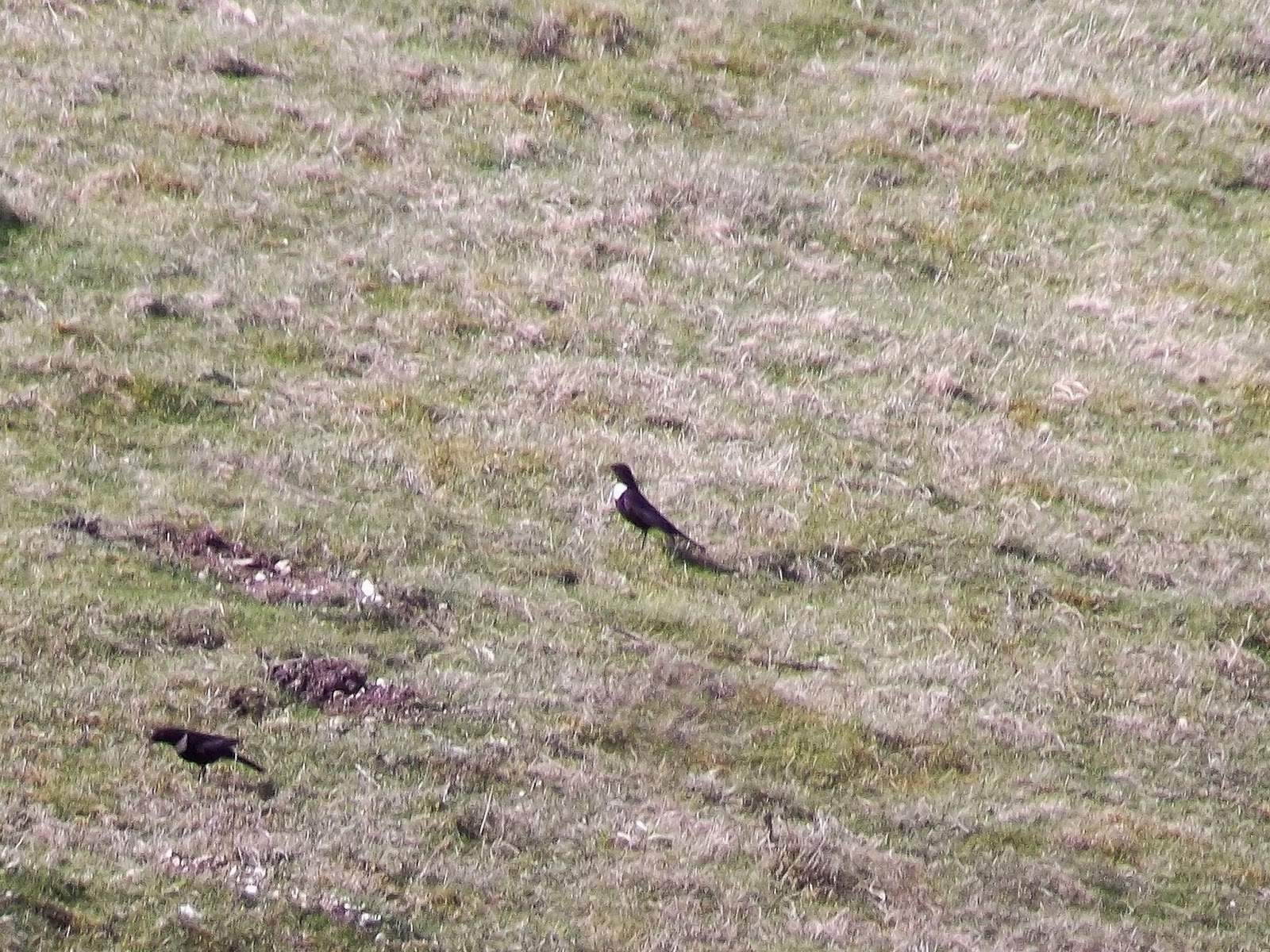 I stayed for more than an hour watching these striking birds before heading back home. I had Sunday lunch to cook.

The following afternoon I headed over to Betchworth Quarry in the hope of finding my own Ring Ouzel. It is an area where Ring Ouzel had been seen last autumn, but I drew a blank. Then it flashed up on my mobile that three Ring Ouzels were present at Woldingham, by 'Grassy Bank'.

The location was sketchy at best but I headed off that way anyway, and after help from Mike Sell, who had managed to extract a bit more info, I parked at the entrance of Cheverral Farm, along the Croydon Road, between Warlingham and Titsey Hill.

I then proceeded to walk in completely the wrong direction. It was getting late and I really had no idea where to look so decided to head home. I drove down the road and turned round and went past the entrance to the farm again, where I saw Ian Jones standing by the gate on the opposite side of the road.

I stopped, and discovered that the birds were down the bottom of the field out of view from the road. There was no footpath, and when Mike Sell turned up a few minutes later, we decided to give it a go.

We could see the finder of the Rouzels with his camera in the valley sitting by a thin line of hedge. It transpired a young lad, Jack Barnes, had discovered the birds, and these were the first Ring Ouzels he had ever seen. I met Jack on the Isle of Wight last August when I went to see the breeding Bee-eaters. A very small world.

Ian and I walked further down the bank and were able to get distant views of three Ring Ouzel as the sun went down. Ubiquitous Red Kite were also present – two very close by.

The rush of birds seen around Britain is something to behold at the moment. Masses of Ring Ouzel are still flying in, and notably Hoopoe – a large influx this Spring. I'm half expecting to see one locally in the next few days.

While at work on Wednesday I was kept entertained by following the Tice's Meadow gang on Twitter. In the afternoon, Rich Sergeant flushed a Wryneck from out of the bushes close to the viewing mound. From then on this smashing find did its best to keep out of view before showing itself.

In the meantime Stevie Minhinnick was leaving Staines Moor and was heading down the motorway towards Bagshot Lea. The only problem was the M3 was completely at a standstill because of a vehicle fire just at the junction he was to come off at.

It took him hours to do the normally 30-minute journey and by the time he got there it was late in the day and the bird had disappeared. I really felt for him. But unfortunately, that is the nature of twitching. It can be a joyless experience even getting to a destination, let alone dipping when you eventually do arrive.

My final destination during this fine spell of weather was Hindhead and the Devil's Punchbowl. Annie and I went there on Thursday in the late afternoon. It is a fabulous place, and likely to produce plenty of good birds this spring. While there were actually few to see during our visit, there were two Tree Pipit, singing and parachuting into the trees.
Posted by Factor at 19:11