WATCHING THE ROSIE GROW UP AS THE PATCH HITS A LULL

The Holmethorpe patch list is slowly taking shape, although still well behind last year, as I am. Of the 89 species currently seen so far this year, I have seen 70. Really nothing to write home about.

I will catch up, but overall the birds are slow to drop into the area. It's not that we haven't had plenty of people out watching, but that's the way it is.

I always find it curious how certain species of bird tend to prefer one site more than another. Take owls as an example. We have regular Little Owls on the site, and the occasional Barn Owl. Tawny Owls are rare, but Short-eared Owls are virtually non-existent – only one in about seven years.

I for one find it hard to understand why. On the Moors, a wetland area with longish grass and hedgerows, we have what appears to be decent habitat but for some reason we don't even get any drop in for an evening or morning on migration.

Same with gulls. The Iceland, Glaucous and Caspian Gulls love Beddington, but over the years ignore our landfill. We've had the odd Iceland but no Glaucs since I've been birding here.

A Bittern flew over the area, seen by Gordon Hay, in January. It was the first sighting for 15 years – even though we have plenty of reeds and good roosting areas for them. Yet down the road at Hedgecourt Lake, Bittern is a regular sighting most years.

Obviously, it makes those rare visitors all the more satisfying when they do eventually arrive but it has dawned on me that walking round the patch every day is bound to be a hard slog to see anything different. Ray Baker is one of our most dedicated patch watchers these days, and he never seems to waver in his enthusiasm for the job. I take my hat off to him! 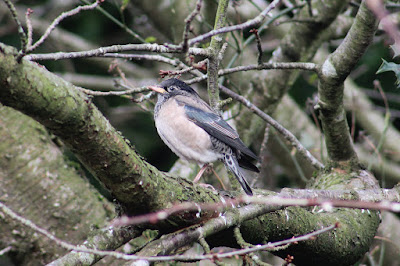 But there you go. It takes all sorts to make up a birding world – one where I occasionally struggle to find the enthusiasm to make the effort to get out of bed early. Luckily, there are still a few decent birds locally to keep me going where the time of day is of little consequence. The Rose-coloured Starling in the Crawley suburbs at Broadfield is certainly one. I went back down to see it last Sunday lunchtime. 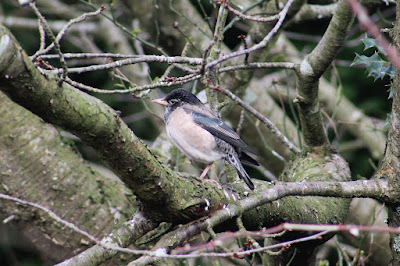 It has been fascinating watching this first winter bird mature from a fairly dull brown juvenile, through its teenage years and slowly into adulthood. Its plumage is now verging on the striking black/blue and rose pink contrast colour scheme that makes these birds so attractive. 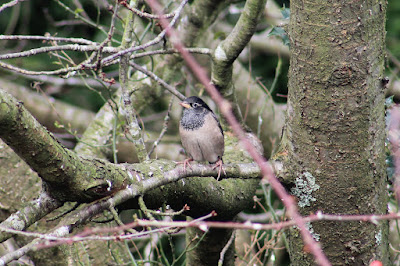 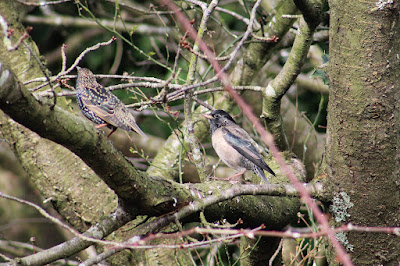 There are now just a handful of days before we can welcome in March and the first spring migrants of the year. Traditionally, spring is our patch's best season – superior to autumn – and so it will be a time I will definitely be getting out there full of expectation.
Posted by Factor at 22:00 No comments:

A brief outburst of birding occurred in recent days. The first visit to the local patch in more than a month, followed by a brief visit to the coast in search of finches.

The patch walk was welcome. I've missed walking around the Water Colour lagoons, the Moors, Mercers Lake, Mercers Farm and Spynes Mere. Up to last Sunday my year list for Holmethorpe was rather paltry, with a stack of regular winter visitors missing from it.

Sightings in recent weeks had been a bit quiet, although Gordon Hay's Bittern last month was a major coup, and he recently followed up with a Brent Goose last week, and Ray Baker scooped four Crossbill that landed in trees for a few minutes before flying off. Crossbills have been missing for a number of years, so these were a great addition.

So the overall list is now up 89, although mine is a great deal less than that. As a group, we are missing one or two species we would expect during the winters months, notably Scaup and Smew, but as a well-known, but now sadly absent birder, Johnny Allen, used to say – every year is different.

Will we get past 144 this year for the first time? We shall see. The one way to achieve that goal is to get out in the fresh air and find some birds each day, so I tried my best to do that on Sunday.

Having bumped into Gordon and Ian Kehl along the way I knew I would at least pick up a few new species for the year from a personal point of view.

One of these was Siskin. I hadn't seen one yet this year, so when the guys told me there was a flock still feeding on alders near Chilmead Farm I knew I should connect. However, they did say a Sparrowhawk had been in the area that forced the flock to scatter for a while – but they were sure to return.

They were almost right, while not exactly a flock, two Siskin were still present and happily singing away – lovely birds. I'm bit of a finch fan (hard not to be) so they were a welcome sight on a very dull and grey morning.

The other notable birds on the walk were a Shelduck on Mercers West, a Little Egret flying around Water Colour, a female Stonechat on the Moors and finally a skulking Water Rail at Spynes Mere.

It was good to be back. We are still waiting for a Waxwing or two on the patch – I still haven't given up hope– and maybe a decent patch rarity. I'm thinking another Merlin, or a Short-eared Owl – a flyover would do!

Each year brings surprises. Two years ago it was a Red-rumped Swallow (which I predicted), while last year it was the White Stork, as well as a Merlin, Little Tern, a pair of Bearded Tit and a Yellow-browed Warbler.

My predictions for early 2017 is a Glossy Ibis. An Alpine Swift was Steve Gale's prediction for last year, and he was so close to getting it right. One was seen by local birder Des Ball in Redhill last March, following the well-twitched bird in Crawley in March 2015. Maybe this year we will have one hurtling around the lagoons.

What about Penduline Tit? This was David Campbell's patch bird topper last year – we've got the habitat, we just need one to drop by.

What is a certainty each winter is regular long-staying scarce and rare birds around the country. In recent years it has been long-staying waders that have drawn the crowds, whereas this winter it has been the passerines. The Blue Rock Thrush is still present in the Cotswolds – and, nope, I have still yet to bother going. Closer to home the Rose-coloured Starling has stuck around and is getting ever closer to its full adult plumage.

On the coast at Newhaven Tide Mills the wintering Serin is still present, and ten minutes down the road a Twite, the first for Sussex for a long while, was playing hide and seek at Cuckmere Haven.

The weather had been rubbish over the past week or two – grey and bitingly cold – but the sun came out on Tuesday on a first weekday I'd had off in weeks, so I headed south down the M23 after lunch.


The sun was out, but there was a notably brisk wind the closer to the sea I drove. I got to Newhaven in double-quick time. The Serin had been notable for going missing for ages in the past, as I discovered at the end of last year but, as luck would have it, I connected as soon as I arrived.

The Serin was flitting around overhead before it landed on a wall around the derelict remnants of the village. A nervous bird, it tended to fly around a fair bit, but that was hardly a surprise as it was constantly disturbed by birders, walkers and birding photographers. It was lucky to get any peace.

It must like the surrounding habitat, however, as it has made Newhaven its winter residence for a few months.

Anyway, after watching and studying the Serin for a good 30 minutes, I left it alone and drove over to Cuckmere.

A birder at Newhaven told me he had already been over to the meandering river mouth and gave up searching for the Twite after a couple of hours. Once I arrived, I soon realised I wasn't going to give it as much time as that. While the setting looked peaceful enough from the car park, once out in the open and walking along the track towards the sea the wind was fierce.

Hell's teeth, it was blowing! At some points it was hard to keep on your feet, the gusts were that strong. Hardly a shock then to find out the Twite hadn't been seen all day. And that's how it stayed for my visit.

There were a few small birds flying about, the odd Mipit and Skylark but it was hard to make out what they were with eyes streaming from the cold wind.

I knew beforehand there were some White-fronted Geese feeding on the flood plain and they were still grazing when I arrived, as were a few Barnacle Geese along with their Canadian relatives.


There were also at least 1,000 gulls on the plain, of which one may have been a juvenile Glaucous Gull, but I couldn't keep my scope steady enough for long enough to bother trawling through them all to see if it was there.

I soon headed back to the car park. The Twite was later reported to have been seen during the day but it would have had to have been a very dedicated and lucky birder to have found it.

Never mind, as compensation we are creeping ever closer to spring. The winter has actually past by pretty quickly this time round – the days are noticeably longer and it won't be long before those first migrants appear.

Holmethorpe had a good spring last year, so I'm looking forward to seeing what turns up in the coming weeks.
Posted by Factor at 10:36 No comments: