THE FINE ART OF MISIDENTIFYING BIRDS

Well, I've had another couple of birding sojourns this month, both at Oare Marshes. But before discussing the sightings there, I'd like to refer back to the previous post.

I joyfully described viewing a first Wood Sandpiper on the local patch, when in fact it was a juvenile Green Sandpiper. This bird had been spotted the day before by Gordon Hay and I'd been sent a voicemail message to explain where the bird was. What I didn't listen to was another message about an hour later from Gordon to say this wader was misidentified.

Predictably, I went along and found the juvenile bird and convinced myself this was, in fact, something else. This is a trait I'm sure (or hope, at least) the majority of birders fall into from time to time.

I've always accepted birding requires a high level of skill, particularly with identifying species, and I have to admit, while enjoying the pastime, bird id – which is quite fundamental to the hobby – isn't one of my strengths. And if you don't go birding that often, like with anything in life that requires skill – no matter how good or bad you are – you will only improve with practice.

As result, I cock up now and again. It has happened before. Last year I convinced myself I was watching an Arctic Tern feeding over Spynes Mere, when in fact it was a Common. This, I suppose, is forgivable to an extent, but I've mistook all manner of birds over the years, some of which I have no enthusiasm to relive here.

Anyway, we move on, tail between legs. Or actually not. As the rest of this post will explain.

I like Oare Marshes, mainly because these days I'm a lazy birder and can't be arsed to walk far. And at Oare, if you feel that way inclined, you don't have to walk at all. Which was exactly my state of mind on the 7th (my birthday). I only intended to stay for the morning before heading back home, but ended up extending the visit for an extra couple of hours.

I parked the car on the lane alongside the East Flood, and that is where I stayed for the next four and half hours.

So what did I see? Plenty of waders, including the usual suspects, as well a Spotted Redshank, a Little Stint and a Curlew Sandpiper. I also saw a Turtle Dove as soon as I arrived. This added to the pair I enjoyed at the end of May, photos of which I have added below.

What I didn't see, however, was the Bonaparte's Gull. Hard as I tried, I just couldn't find it – but then nor did anyone else who was visiting at the same time as me. I also didn't see a Roseate Tern that a few surrounding me had convinced themselves they were looking at and walked away happy with their find. I was desperately hoping it was one, but in the end it was a juvenile Common Tern – as was the adult bird close by, and not an Arctic as some suggested.

Also some thought the Little Stint was a Dunlin, but having seen quite a few I knew what this was. Birding is a bloody obstacle course. It certainly was on that day. 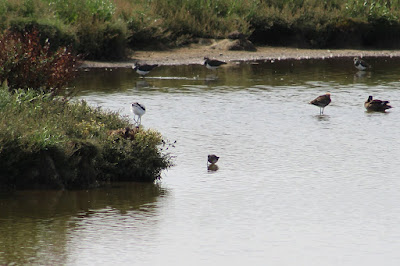 Then last Monday, on the way back from taking my mum for a hospital appointment in Margate, I dropped in at Oare again on the way home. Another Bonaparte's dip took place, but at least I got decent look of the Long-billed Dowitcher, 16 Whimbrel, as well as some really nice views of a Yellow Wagtail. Misidentifying one of those really would be a skill.

A BIT OF RADAR LOVE CHASING A MARSH SANDPIPER

The month's seem to be flying by this year. It's August already and as far as birding is concerned I've done very little since my last post in June.

Gavin Haig of the excellent Not Quite Scilly blog recently wrote an post concerning 'phasing'. This is a state of mind where birding doesn't hold the same appeal as it once had. It's someone birders drift in and out of and is someone I can definitely relate to. I'd say my interest in birding is always there in some form or other, but I have to be honest and say I have fluctuated into this phasing state on many occasions this year. There have been numerous times I simply haven't been arsed with it all.

The local patch has been shelved for a couple of months and when I have had the time to go birding I've chosen to go on a twitch more than do patch work. Of late, I've gone over to Cliffe Pools a couple of times to try and locate the juvenile Marsh Sandpiper that has been present for some weeks now.

The first attempt was a couple of weeks ago, prior to a visit to my mum's in Margate. I managed to get to Cliffe about 15 minutes before a Peregrine had flown over the area and had sent all the waders and gulls up into the air. It meant the Marsh Sandpiper, having been in a spot where views were good on Radar Pool, had cleared off and completely disappeared. It wasn't seen again all that day.

I did get see to see the successfully breeding Black-winged Stilts and their young, with the help of a lift from Dominic Mitchell, who I happened across on my walk, and also a couple of Spoonbill.

I gave the site another go last Saturday, prior to a trip up north to Lincolnshire for work. I bumped into two pals I hadn't seen for a while, Mark Elsoffer and Steve Minhinnick (the infamous Smutty Birders from Tices Meadow), and while the banter was good, a successful twitch was looking decidedly suspect.

The Marsh Sandpiper again was playing hard to get. But luckily, another group of birders from Ashford turned up and as we viewed from the mound at the south west area of Radar Pool, namesake Neil briefly spotted the wader in the distance. At the same time another birder closer to the location flagged up the sighting on his pager, so we knew we were at last on to a winner.

After another walk alongside Radar Pool down to a closer position we eventually were on to it. A smashing little wader, the Marsh Sandpiper had obviously given up sleeping and was feeding alongside some Greenshank. The two Spoonbill were also in attendance.

So after that lifer, a more local first coaxed me into patch action yesterday lunchtime. Gordon Hay had rung the day before to say a Wood Sandpiper was on the Moors with a couple of Green Sandpiper. This bird had first been seen by Ray Baker a couple of days earlier, so it was good to discover that it was still in the area.

The weather had been atrocious all day on Wednesday and unseasonably windy yesterday, so I was fairly confident the Wood Sandpiper would still be about. And fortunately it was, sleeping with the two Green Sandpiper on the southern Moors pools next to the railway line.


It eventually woke up to preen so I got to see it properly next to its green cousins. A really nice bird for the patch.

So now my birding juices have begun to flow again, although my predominant urge, with the weather as it is, is to go on a seawatch. Unfortunately, the best place for that currently is in Cornwall at Porthgwarra. What a great place that must be. Another year perhaps...
Posted by Factor at 00:29 7 comments: