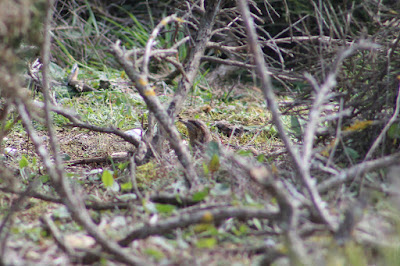 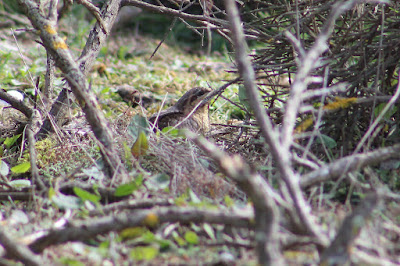 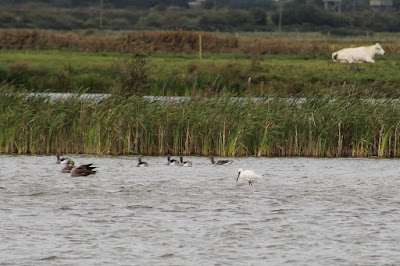 Soon after midday the weather turned, the wind picked up and the rain began to fall, so it was time the head back home. Overall, however, a decent morning
Posted by Factor at 17:16 5 comments:

It has taken my a while to get to this landmark, but having crept towards it for some months I finally got there with the Baird's Sandpiper at Cuckmere Haven two weeks ago.

It was a nice bird to get to the magic number, and was easy to see, with only a short walk. It was also made enjoyable by the company – birding mate Matt Phelps arrived at the same time as me and so it was good to catch up with him, as it was with Paul Cox, someone I'd not seen since the Red-backed Shrike at Hayes in 2012! 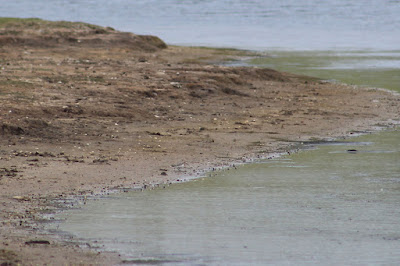 And if there is one thing about birding I enjoy as much as the bird watching itself is having banter with a few mates while doing it. I don't get out as much these days, so it was a welcome distraction from everyday life.

So the Baird's Sandpiper wandered about a bit, fed a bit, rested a bit. It was a tad distant for decent photos but not to worry.

So, looking back at the 300 bird species seen over the years I was daydreaming earlier today and thought I'd list my favourite birds in that list.

The birds that were the biggest pain in the arse to see were:
Baillion's Crake at Rainham, Hudsonian Whimbrel at Church Norton (may not even be relevant now either), Marsh Warbler at Rainham Marshes.

The most fleeting and therefore least satisfying birds to see were:
Ortolan Bunting at Beachy Head
Purple Heron at Lodmoor

Next comes the birds still missing from the list I should have seen by now. No excuses. Anyway, here's my list of shame:
Cirl Bunting, Honey-buzzard, Pink-footed Goose, Puffin, Purple Sandpiper, Storm Petrel, Willow Tit, Yellow-browed Warbler. Plus all the Scottish birds (not traveled there since 1972). There you go, I've said it now!
Posted by Factor at 22:23 2 comments:

THE FROG AND THE HONEY BUZZARD

Annie and I celebrated our 25th wedding anniversary last Tuesday and because it was a landmark day and not being the big party-types I arranged for us to stay at La Grenouillere, near Montreuil-sur-Mer, about 10 miles inland from Le Touquet. 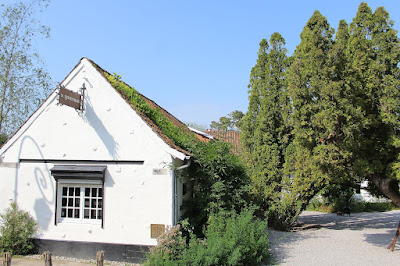 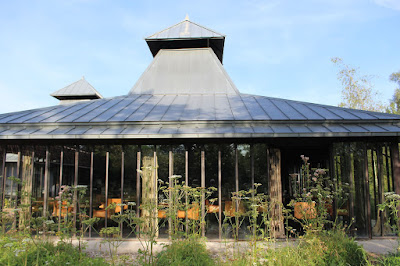 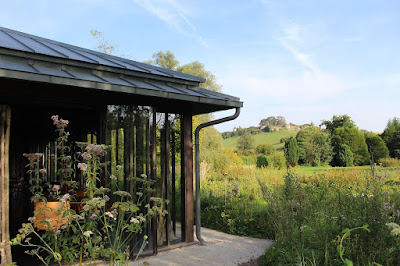 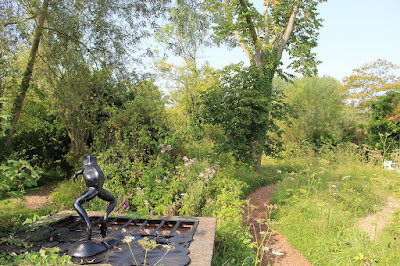 La Grenouilerre is something out of the ordinary. For one thing the decor has a particular theme – frogs. There's frogs on frescos in the anti-room, plus a prominent scultpure in the garden. There is an obvious reason – if you speak French at least – as a grenouillere is a swamp where frogs live (or something like that). 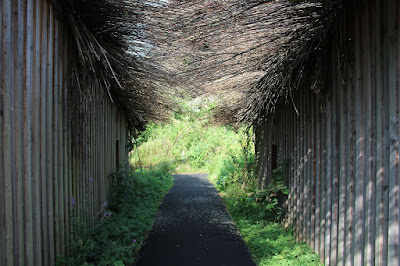 It has two Michelin stars and is run by one of France's best and most innovative chefs, Alexandre Gauthier. Gauthier is renowned for focusing on nature, his menu features imaginative ingredients from the surrounding countryside. And he loves pepper. Pepper is often a feature – including in ice.

Set in the Canche river valley below the walled town of Montreuil, there are a number of guest rooms and cabins on site, one of which we booked for two nights. These cabins are set deep into the unspoilt grounds, and you feel genuinely at one with nature in amongst the shrubbery. It is peaceful, tranquil and the perfect environment to relax.


It also helped that we timed our two-night visit for the two hottest days of August. Perfect.

La Grenoulliere features two striking metallic marquees that extend out into the garden from the century-old main buildings, and were designed by architect Patrick Bouchain. This radical juxtaposition of old and new is in keeping with the cuisine.


The restaurant, from which you can watch Gauthier and his team prepare the dishes, serves a radical cuisine in a minimalist, spacious environment with just a few tables. It a very relaxed place to eat. Nothing here is austere – feel free to wear jeans if you want – this is a place to enjoy excellent food.


We went for the eight-course tasting menu with accompanying wines (decent sized glasses they were too! The honey-based dessert wine came in a huge glass bowl and the wine was siphoned into a large pipette before being served). The food was amazing. It including melon and langoustine, sea bream, a river fish (a poisonous one), courgette prepared in a way that is remarkable, crab, chicken with verveine, we also had additional mushrooms picked that day in the surrounding woodland, plus honeycomb, strawberries and rhubarb like I've never tasted before.

And in between we tasted all manner of interesting delicate sensory delights including samphire, a flower that tasted of truffle, quail eggs, apricot mousse in a casing that dissolved in the mouth, all subtle but fascinating. The courses were small but even I was full by the end of the meal.

So we ate well and drank fabulous wine.

And I saw a Honey-buzzard. 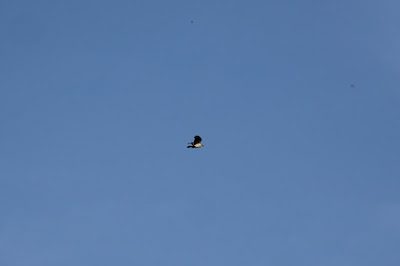 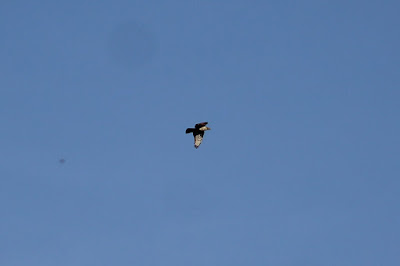 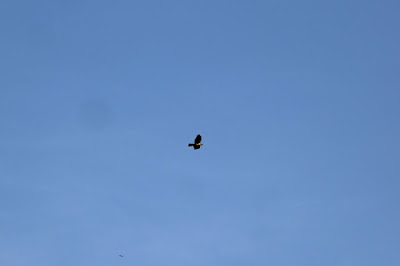 On the first day, as we chilled out in the late afternoon sun outside the cabin, I noticed a large bird being mobbed by Swallows and House Martins. At first glance, as it flew behind a tree, I thought it was a heron as it had large wings. I managed to get my bins on to it and immediately could see it was a buzzard. It looked different, and when it called it didn't sound like a Common Buzzard.

Having been to this area a couple of months earlier and drawn a blank with Honey-buzzard, I was really hoping this would be one, as despite being birding for some years now I have never seen one.

Looking at it closely I felt 80 per cent confident, but I've made mistakes before. I managed a few record shots, but only after I was forced to switch off the autofocus which had frustratingly decided not to work.

The perfect end to a fabulous couple of days!
Posted by Factor at 17:14 4 comments: