Every patch has its day but Holmethorpe has just had a week to remember, with hopefully more to follow!

Spring migration has been slow to get going this year, after northerly winds courtesy of the jet stream and high pressure over the country acting as a red light stop sign for passerines and hirundines alike.

The wind has changed now direction and, as a result, the red light has turned to green.

Holmethorpe had been relatively quiet during the past couple of weeks. The first-winter female Scaup had been happily swimming around Mercers Lake with her Tufted Duck pals, a drake Shelduck was waiting patiently for a mate to turn up on Spynes Mere, and Little Egret have become an ever-increasing fixture on the patch.

On Tuesday I'd been working at home all day and, stroking my recently acquired beard, had been constantly gawping out of the window to witness a pleasant sunny day disappear with every minute passed.

I'd ummed and arred over whether I could really justify skiving off working on a horseracing magazine with a deadline beckoning to pop out in the late afternoon for a quick walk around the patch.

In the end I took the sensible option and decided against it. Work won.

And then at about 6.45pm, when the sun had already set, a tweet on Twitter nearly had me choking on a mug of tea.

There had also been a third bearded tit. Me.

I didn't know how long it had been since Holmethorpe's last Bearded Tit sighting but I imagined it had been a few years ago. I later discovered the last sightings of the species were a pair on December 7, 1972. With a near 40-year gap, a Bearded Tit was a patch mega.

Dudley Cox, the birder who discovered these fantastic birds, lucked in when a couple of non-birders walking along the causeway in the late afternoon between the two Water Colour Lagoons asked him what the two pretty-looking birds were...

By the time I'd heard the news it was too late to get out and so I had to wait, along with regular patch watchers Gordon Hay and Ray Baker, for sunrise the next morning. No wonder Gordon said the next morning he didn't get any sleep that night...

He was already on site by the time I dragged my carcass to the lagoons, but happily the two Bearded Tit were still there. The pair were making their way up and down the strip of reeds close to the causeway on Water Colour Lagoon 1, occasionally moving closer to the path on the strip of hedge along the fence.

What a fantastic find! It is moments like these that make patch birding so satisfying.

Gordon had to shoot off to work while Ray headed for the Moors, where he found a Mandarin duck. I stuck around the lagoons in search of hirundines. Three Little Egret flew over the flooded area at the back of WC1 (Water Colour Lagoon 1) as Ray returned to view the Bearded Tits.

While we were trying to take photos of these hyperactive birds I heard a wader calling overhead. Above us circling the lagoons was an Avocet. It looked as though it wanted to find a spot to land and, sure enough, it dropped in on the small muddy island appearing on WC2. What a morning this was turning out to be! This was the first Avocet I had seen here for a while, having missed a couple of sightings in recent years.

It only stayed for about 15 minutes before flying off north, but a great patch year tick. It made the early start worthwhile.

I headed back home soon after to get ready for work and as the day progressed new birds began to arrive. The first Sand Martins and Swallows arrived at lunchtime to make it five new species for the year in less than 24 hours.

The male Bearded Tit was seen preening and feeding the female at lunchtime. A promising development.

It had only been a few days earlier I chatted to Gordon about the bird he most wanted to see on the patch. I was expecting something like a rare wader or warbler, but instantly he said: "A Merlin. It would be a first for here."

In the 30 years or more Gordon Hay has been birding the area he has never seen a Merlin on the patch, and nor has anyone else.

The following morning I got woken up at 6.00am by a phone all from Gordon. A female Merlin was hawking the Moors! Both he and Ray had great views of this little raptor from the Water Colour mound. What a treat that must have been. I'm so pleased for Gordon – a well-deserved first for Holmethorpe.

Added to the list were two Brent Goose that landed on the island on WC2 before flying off with a handful of Greylag Goose.

When I arrived an hour later the Beardies were still flitting around the reeds. Eight Sand Martin went through. My first of the year. The female Scaup (remember her!) had moved to WC1 for the day, along with a female Shelduck feeding on the lagoon, before it flew towards Spynes Mere to join the drake. I went for a brief walk around the north of the patch. A few Chiffchaff were singing, and a pair of Little Owl showed well from an oak south of Spynes Mere.

This morning I went out again before heading off to work and had my best views of the Bearded Tit. The male climbed higher in the reeds as the sun warmed the air. Two Sand Martin flew over the lagoons. Gordon, Ray and Ian Kehl also discovered a White Wagtail at Spynes Mere.

I will have to wait now until Monday before another patch visit and with strong winds and heavy rain on the way, particularly on Monday, I wouldn't be surprised if one or two more patch megas turn up.
Posted by Factor at 15:02 2 comments: 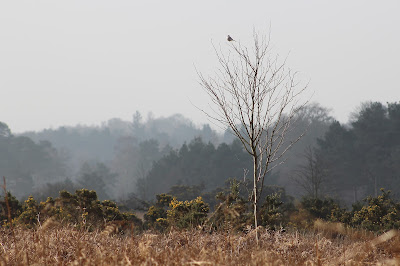 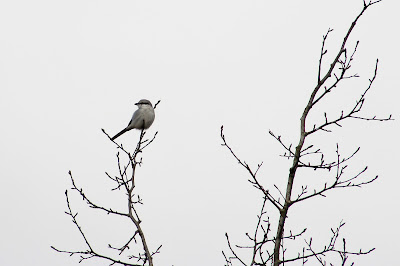 It has been a satisfying couple of weeks. I've mentally freed myself from the drudgery of getting in the car and driving somewhere for nearly an hour simply to see a fairly rare bird.

I'm not sure how this has happened, but for the moment I am more than happy to potter around the local patch and see what turns up. No pressure, just a nice walk enjoying the fresh air in half-decent weather – recently it has been cold, but dry and bright. A nice change from wind and rain.

I could, if motivated, drive down to the coast to see the odd Glaucous Gull and Purple Sandpiper. A Glauc turned up the day I was at Dungeness and has been there ever since, but I just can't be arsed to drive anywhere.

The thing is my local patch is doing quite well. As Steve Gale wrote recently here, Holmethorpe has changed quite a bit over the years, some of it for better, some for worse, but throughout its history it can deliver excellent birding, due in large degree to the variety of habitat within its boundaries.

Local birder Gordon Hay has walked this area for more than 30 years, and hasn't lost his enthusiasm for the place. He finds the majority of the best finds on the patch, along with Ray Baker, another local birder who is out most days searching for species. Gordon saw, for example, a pair of Black-tailed Godwit in January, the earliest record of these waders at Holmethorpe, and there have been plenty of good birds since.

Only during the past couple of weeks Holmethorpe, via Gordon, has had Oystercatcher, Mediterranean Gull, Raven, and notably Scaup. The first-winter female arrived on Water Colour Lagoons on February 21, then went missing for a few days before taking up residence with a small group of Tufted Duck on Mercers Lake.

I've been out a few times recently, mainly in the late afternoon, hoping to find a Med or Iceland Gull among the large flock of Black-headed Gull that have been following tractors ploughing and drilling the fields on Mercers Farm, and then scanning the roost on Mercers Lake, but I've drawn a blank each time.
The Oystercatcher arrived on February 23 for the afternoon, and as I happened to be working from home that day I was able to catch reasonable views of it on Mercers Lake later in the day before it flew to one of the ramps further away.

The Scaup slept for most the time I was there this evening.

So, yes it has been enjoyable. I'm nowhere near Gordon's patch list this year, I'm only on 72 I think, but it has been a good start. It has also been nice to see Water Rail, Grey Wagtail and a few wintering Chiffchaff and Stonechat (we had up to seven Stonechat on site this winter – a large number for the patch, but they now appeared to have left), but the highlight this week undoubtedly has been the mumuration of Starlings.

Over the past few weeks the numbers of roosting Starling have been building steadily. We now have at least 3,000 of them roosting in the trees along the Moors cycle path, and this evening I was treated to a wonderful display. I'm hoping the numbers grow even larger. 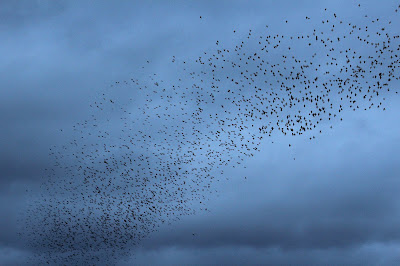 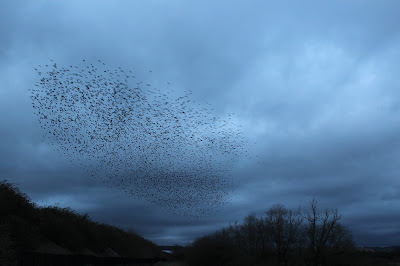 The birds occasionally flew in two groups before joining together – they flew right over my head at one point down on the Moors – but the best sight was seeing this amazing flock fly a few inches above the water across Water Lagoon1 in the half-light. Well worth paying a visit if you are in the area as the sun goes down.
Posted by Factor at 23:30 4 comments: