It has been good to get out, even if briefly, this past week for the odd spot of local birding. November has proved to have been an exceptional month for Surrey birders and those on the borders.

For some reason November is often a month to savour for us land-locked enthusiasts and none more so than this year.

The Hawfinch invasion has kept on giving, while on my local patch a showy Jack Snipe was joined by a second for a while down on the Moors. Also featuring at Holmethorpe has been an ever-increasing finch flock, seen along the hedgerow between Glebe Lake and Nutfield Church, next to a field with a failed barley crop. In among the 120 or more Chaffinch have been up to 15 Brambling, along with one Lesser Redpoll. 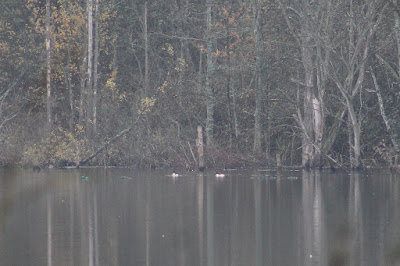 Earlier in the month (15th) three Goosander appeared on Mercer's Lake. All were in partial eclipse and while one flew off, I managed to get down to the lake to see the other two before they also set off west. A patch lifer!

Over at Beddington, David Campbell and Magnus Andersson found a Twite, a really rare patch and Surrey visitor. The last one seen at Beddington was in 1991, with Surrey’s most recent in 2004.

Then, of course, further up the M25 there has been Staines Reservoir and the Shorelark that has turned out to be a very rare sub-species, the American Horned Lark.

The Horned Lark eluded me for a couple of days, in as much I drove past the Staines junction on the M25 on both Saturday and Sunday mornings and had no time to take a detour for a look.

I made time yesterday, however, and managed to get up to The Res before the light disappeared and, thankfully, a couple of visiting birders put me on to the American Horned Lark, which was feeding on the west banking of the north basin. It was distant and too far for a photo, but at least I managed to get a half reasonable view of the rare visitor.

Eventually I was the only person on the causeway when another birder arrived, Robin Dryden, who I discovered is on the Berkshire Records Committee. As he arrived the heavens began to open, and in typical Staines Reservoir fashion, the wind picked up and it became bitingly cold. I managed to steer Robin on to the bird before it was too unpleasant for either of us to stick around. 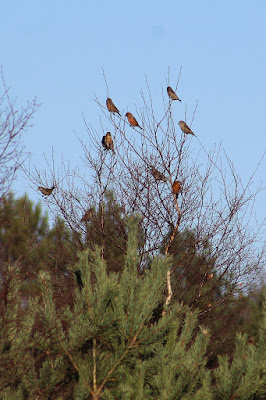 It was while at The Res that I heard about the Parrot Crossbills just over the border at Wishmoor Bottom. I'd seen some of these smashing birds four years ago at Hemsted Forest in Kent, but this was too good an opportunity to miss, so I travelled over to Camberley this morning.

After a 20 minute walk followed by another 15 minute wait, the flock of 16 Parrot Crossbill appeared, with a couple of Common Crossbill, and landed in a pine tree close by. 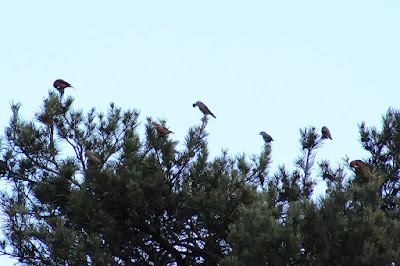 During an enjoyable 40 minutes in the sunshine, along with plenty of other onlookers, including Robin who turned up a little while later, I watched these birds set about snipping cones off the branches and then expertly feeding on the pine nuts.


On the way home I managed to get over to Nutfield Church to see the finch flock for the first time before it got dark and found a few Brambling and the Lesser Redpoll. The local birding group, predominantly Gordon Hay, are keeping their eyes peeled just in case a Twite shows up. You never know.