MAY BIRDING LUCK = A DOTTEREL FLYING IN AT FRAMPTON MARSH

My wife Annie summed up birding perfectly. "It's seems to me you need patience and luck," she said.

I described how I went to Frampton Marsh RSPB reserve a couple of Sunday's ago on the way back from Skegness, where I had been reporting on a stock car event.

On the way to Lincolnshire I had a look to see if there had been much happening at Frampton, which is on the way to Skeggy, just outside Boston, and only a short detour.

I had been to this excellent reserve a couple of years ago and was looking forward to paying it another visit. A Broad-billed Sandpiper had been found in the morning, along with a Temminck's Stint. I had a quick look on the way up, but the the Sandpiper had gone missing for about an hour, and because there was no rush to get home later in the day I went back in the evening.

As I drove along the winding lane towards the reserve, a Barn Owl flew over the car – actually my first of the year! I drove up to the car park at the sea wall end of the reserve and met a chap called Craig Howett, who is from Oakham.

He was another birder looking out for this Broad-billed Sandpiper, but he hadn't yet seen it. He was waiting for the tide to come in to force the birds back over the sea wall and on to the scrape we were viewing from.


Craig turned out to be a very knowledgeable birder, and he pointed out a couple of Little Stint as the waders began to fly in.

There were plenty of Dunlin, Ringed Plover, Black-tailed Godwit and Avocet, plus a nice Ruff but no Broad-billed Sandpiper. A couple of Bearded Tit pinged in the reeds in front of us, together with chattering Reed and Sedge Warbler. In the near distance there was the distinctive sound of a Grasshopper Warbler, while a Cuckoo called out somewhere in the far reaches of the reserve.

As the sun began to sink lower towards the horizon, we resigned ourselves to the fact we were unlikely to see this rare wader.

But all was not lost. Suddenly Craig became animated as another flock of Dunlin flew in. In among them was a bigger bird that split off from the group and landed on a grassy mound. He called it immediately. "It's got an orange breast, it's a Dotterel!" 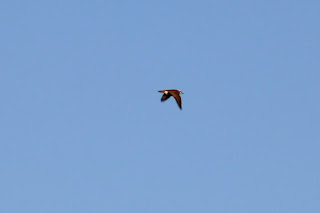 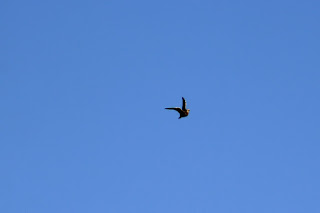 I couldn't find it immediately but my birding colleague had it in his scope, which he kindly allowed me to view it in. A fantastic female Dotterel.

What a result! And so unexpected too. But then within a minute or so she took off – looking as if to head back out to sea she turned and flew right over our heads towards the fields inland.

Our luck was well and truly in. Craig and I were the only ones to see this bird. About 15 minutes later the reserve's Visitor Experience Officer arrived to a bit of late-evening birding after work and missed this treat.

But that is birding in a nutshell – being in the right place at the right time.

Patience and luck. Luck was definitely on my side that evening.
Posted by Factor at 23:36