Having had what can only be described as an indifferent spring this year, the month of May has certainly made up for my lack of birding during the first quarter of 2017.

There have been very few disappointments, if any, these past few weeks. I would normally have focused more on the local patch, but seeing as my patch list for the year doesn't even include Yellowhammer, it was important from a personal point of view to get out and see some good stuff to keep my flagging moral going.

Thankfully, May has been great personally and there's still a few days before it comes to an end. It's hard to pinpoint a highlight, but the three White-winged Black Tern at Staines Reservoir on Tuesday will take some beating.


I've only seen one before, and that was a couple of years ago at Wareham in Dorset, so when these beauties were flagged up on the Rare Bird Alert site, and seeing as I was working from home, I found time to head off to Staines in the late afternoon.

The reservoir used to be one of my regular birding venues, but I hadn't been in more than a year. Why that is I'm not sure, only that perhaps birding local to home has become more of a priority for the past 18 months. 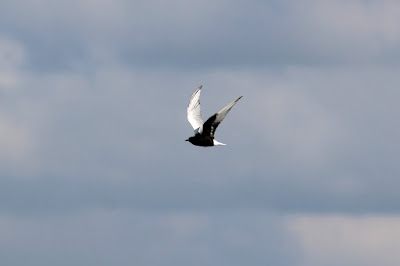 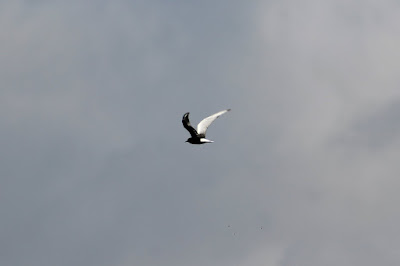 But it was good to be back at the old place, and also to catch up with birding friends I haven't seen for a while including Matt Phelps, who had had the same idea as me and took a detour after work to see these fantastic birds.

Later I bumped into another mate and the man who had discovered the terns, Dominic Pia. Staines Reservoir is his local patch and, while the spring had been a decent one at the "Res", it had dropped off dramatically in recent weeks. Inevitably, like all who trudge the same old patch day after day, Dom's enthusiasm was beginning to wane. 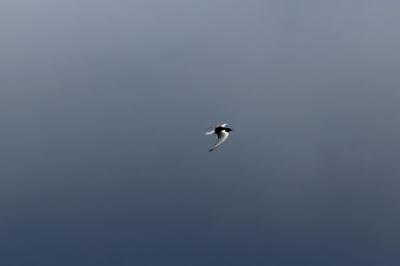 But, as so often happens when a birder begins to question their sanity, a cracking rarity suddenly makes all the pain go away.

And these three White-winged Black Terns, flying predominantly around the south basin, were an exceptional discovery.

It would have been good to find one, let alone what appeared to be a family group of three, including a very rare spring sighting of a 1st summer juvenile.

They all made for a great sight, as often they would fly low over the causeway towards the north basin and back, calling as they went. Views were great as they dived for fish and occasionally perched on a pipe that was jutting out of the water on the south basin.

Another unusual visitor to the reservoir was an Avocet on the west bank of the south basin, but on this occasion it hardly got much attention.

While many aficionados have decried May as not being the month it could have been, I've certainly enjoyed it.
Posted by Factor at 09:43