It has been an enjoyable week on the birding front – but unfortunately I haven't had time to write about it until now!

Last Tuesday (9th) I had the whole day to myself. I narrowed down the options to either a seawatch at Dungeness or a trip to a reserve I haven't been to before in Suffolk. After having breakfast at Clacket Lane services on the M25, it was either turn left for Essex or go straight on for the Kent shingle. I chose the former.

And for once, I made the right choice. I headed for Landguard Nature Reserve near Felixstowe, and a mighty fine spot it is too.

My decision was influenced by the weather – it didn't seem favourable for a Pomarine Skua watch – and also by the presence of a Great Reed Warbler at Landguard during the previous couple of days, plus the possibility of a male Ring Ouzel and a Wryneck. OK, so it was a twitch, but I did fancy a day out somewhere different.

It was a straightforward journey but I arrived a bit late at just before 10am. I should had got there sooner as I missed a Red-rumped Swallow fly by about 10 minutes earlier (always the way). 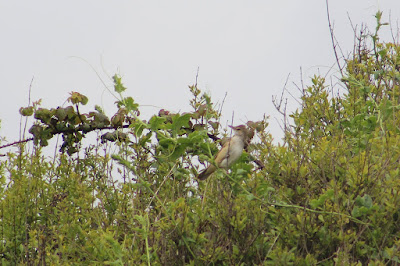 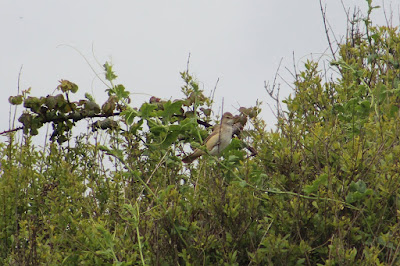 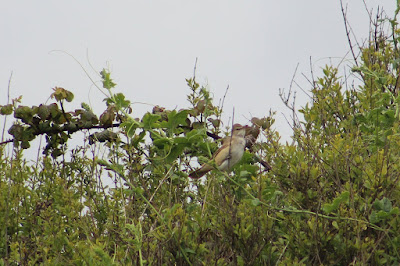 But never mind. There were a number of local and not so local birders lined up staying into the bushes along an area called Icky Ridge just down from the Landguard Fort car park, and it wasn't long before the Great Reed Warbler began it's loud throaty and scratchy song.

Standing around waiting for a bird to appear is often a frustrating way to go birding, but thankfully it wasn't long before we got a few fleeting views of the warbling beast. As I was intending to stay for at least a few hours I decided to go off to see what else was around this compact birding site.


While the Wryneck hadn't been seen for at least 24 hours, there was still plenty to see. The male Ring Ouzel was feeding out in the open, although a few photographers predictably moved too close and as a result, eventually it flew out of view.

There were a number of Wheatear flitting around – incredibly, they were my first for the year! Also breeding Little Ringed Plover and Oystercatcher.

I made my way back to the area where the Great Reed Warbler had been seen and it had moved further along the bank. It eventually popped up high in the scrub and showed well for a minute or so before flying off and diving into some hawthorn bushes. That had been as good as i could expect

After Landguard, my plan was to work my way back home via other sites along the route. In the afternoon I headed for Abberton Reservoir, as about an hour before I arrived a Temminck's Stint had been discovered on the south bank of the reservoir viewed from the Layer de la Haye Causeway.

Once on the causeway, I was shown where the bird was by the finder, Stuart Read, and within seconds I was looking at my first Temminck's Stint. It was a smashing little wader, feeding on the edge of the water, along with a number of other waders – a Little Ringed Plover, Ringed Plover, Lapwing, Common Sandpiper, Greenshank and a Redshank.

A Marsh Harrier flew over head, while there were also a couple of Whimbrel in the area, plus three Black Tern and a Little Gull on the opposite bank of the reservoir.

As time was getting on, my next target was Rainham Marshes, where a possible Franklin's or Laughing Gull had been seen around midday. I got there shortly after the reserve closed, and was greeted by a swarm of Swift feeding off the reserve. A Cuckoo sang in the distance, and there were numerous Shelduck on the banks of the Thames.

I made my way around to the Serin Mound area where I met Howard Vaughan, the Visitor Experience Officer at Rainham Marsh Nature Reserve, who was scanning the Thames. The gull had only been seen briefly and a tantalising photo was taken, which gave mixed messages as to its species.

The consensus was it was a Franklin's Gull, but later it was concluded that, in fact, it had been a Laughing Gull. Dominic Mitchell joined us, having been with a group searching for the bird on the landfill with no luck. Having scoured the Thames with no sightings of it, a few of us headed for Rainham West, where the river bends round towards Cross Ness.

With no luck there we drove round to the barges nearer to the reserve, but this gull was having the last laugh. Having drawn a blank it was time to head home. Despite the dip I'd enjoyed the banter and the thrill of the search – it had been a good day and as it transpired, there would be further decent birding a couple of days later.
Posted by Factor at 00:50