OYSTERCATCHER IN THE EYE

I'm currently reading Dominic Mitchell's blog on his trip to Thailand. Boy, I don't think I'll ever get excited about a bird in this country again! The Gurning Nan Bread is one hellava bird! Sorry, I mean the Gurney's Pitta...

Seriously, though, when you take a deep, searching look at what the world has on offer on the birding front, it does make you wonder why you bother. I'd love to go to Thailand just for a couple of weeks on the beach (have you been outside the front door in Britain today? Hasn't it been just the greyest day on record?) let alone a trip to see some of the world's most seriously exotic birdlife. To witness some of these birds must be breathtaking, but then... look what happened yesterday.

I was on the way to the shops to pick up some provisions for the weekend (Annie was at home nursing a hand with a broken Scaphoid bone) when I deviated towards my local patch at Holmethorpe (with her permission I might add, before you start thinking I have been negligent). I didn't bring my scope as the afternoon didn't appear promising. It was yet another horribly grey day and after about an hour of seeing virtually nothing of any note I turned round to head home. As I did so, I was confronted by a figure dressed in camouflage green, jogging - actually, struggling to jog - towards me. It was Kojak. He's had a knee op, so he's not that fit at the moment - that much was obvious. I knew something must be afoot if he was running with all his gear wrap around his neck. I ask what is it was, and he eventually wheezed that it was an Oystercatcher.

If we had been by the sea, we wouldn't have bothered running to see an Oystercatcher - someone on the same day had counted more than 250 on the Kent coast. These are not rare. But in land-locked Surrey? They most definitely are.

We arrived to join Gordon Hay, who found the bird, and Graham James, who kindly left me a message on my mobile to tell me about it (I only picked up the message as Kojak headed towards me). Shortly afterwards, we were joined by Johnny Allan, who was adding to his remarkable Surrey list, and Ian Kehl.

And there you have it, just for one day only. Today, it had gone. Such is the magic of birding in Surrey. One day you see nothing, the next you see a single bird that hasn't been seen in the area for some time. So far this year, I have seen Waxwing, Great Grey Shrike, Water Rail, Slavonian Grebe, Bittern, Water Pipit, Scaup and an Oystercatcher in Surrey, but I haven't yet seen a Yellowhammer or a Treecreeper. It's a strange old pastime. 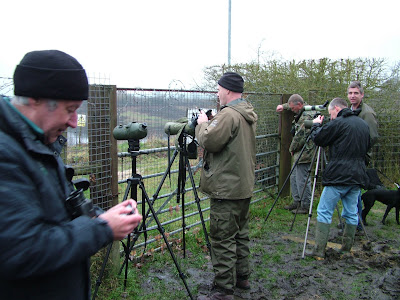 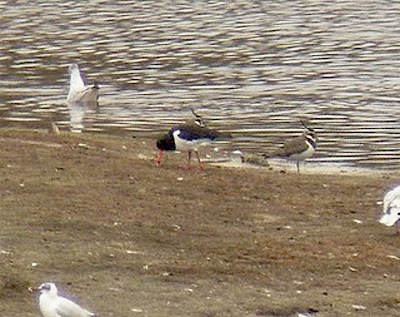 Photo courtesy of Graham James
Posted by Factor at 00:30