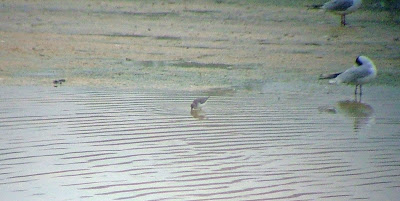 Yet another dreary, grey day - February and winter's reluctance to end is becoming increasingly tiresome - but it is amazing what can cheer you up.

I received an e-mail from Graham James at lunchtime yesterday telling me Gordon Hay had seen a Dunlin on the sand spit on Spynes Mere. OK, so you will trip over Dunlin on the coastal estuaries of Britain, but Holmethorpe Sand Pits isn't anywhere near the coast, and consequently, in a similar vein to the Oystercatcher on Saturday, the sight of this little wader would lift the spirits.

I had work to do, but it's worth popping out for an hour for a local patch tick.

The only snag was it had gone by the time I got there. A fox was mooching about on the spit, and its arrival must have forced the Dunlin to fly off. Funny, but I was really disappointed. Don't know why really, because the chances are I would see another one in the area before too long, as these birds appear at the Pits now and again, particularly early in the year.

I trudged back home.

Today, and another e-mail from Graham. Kevin 'Kojak' Guest was at Spynes Mere and the Dunlin was back. So off I went again. I arrived to see Kojak standing in full wet-weather garb with his scope. He took one look at me and brought his hands to his face. Not a good sign. "It's flown off!" he said.

"You're joking!" I replied (or words to that effect).

Nope, it had gone alright. Something spooked it as I arrived and it had flown over towards the M23. Kojak was convinced it would return before too long.

And so it proved. I gave the area another look and there it was. The Dunlin was fervently prodding the sand with its beak searching for grub. Good stuff. Kev was genuinely pleased I'd seen it, and it was a landmark bird for him - his 100th all-time Holmethorpe sighting. He celebrated by tucking into a sandwich.

We chatted for a while about the prospect of a mega turning up here eventually. It's something Graham is convinced will happen before too long. Holmethorpe had 143 species either land or fly over the area last year - 206 all-time - and more birds are dropping in all the time.

There's plenty still to see in Surrey before this winter is out, Firecrest for one. Beddington looks a good spot for those currently, plus Tree Sparrows and Caspian Gull. I just need a window of opportunity to get up there. 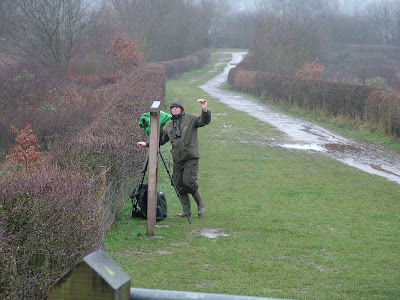