JUDGING A BIRD BY ITS FEATHERS 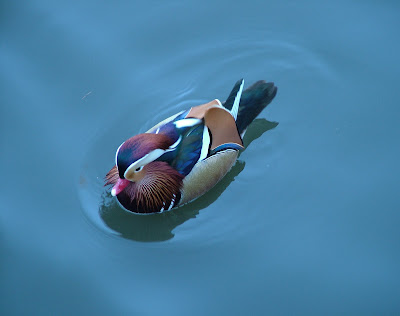 A Mandarin, a Wood Duck, several Red-crested Pochard and a Pintail often appear on my local pond on Frenches Road.

They mingle with the resident Mallards and Ferruginous-type hybrids and join in with the daily melee for bread fed to them by local residents. They are not permanent fixtures at Frenches Pond, however. And here lies the dilemma.

The Mandarin, a couple of the Pochards and the Pintail originally had their wings clipped, but since then the management of the birds on the pond has come to an end due to lack of funds. Added to which, neither the local water board or council have a clue as to who is responsible for the upkeep of the wildlife on the pond.

Needless to say, these birds have since had a moult and grown their wing feathers back and are now able to fly freely.

By all accounts, the two original Red-crested Pochards were joined later by the other Red-cresteds, so now there are five males and one female. Whether it is right to call all these birds escapees is debatable, and therefore the right for them to be ticked by the bird-watching community. It also doesn’t help that these birds can now turn up anywhere, and therefore birders would be unaware that they were originally captive birds.

In the end, though, does it really matter what their origins are? We happily tick Pheasant and Red-legged Partridge, most of which are reared on farms and released. When I was growing up on Tilburstow Hill Farm, my dad had some Bantam Chickens, one of which we had sitting on Pheasant eggs on behalf of the local gamekeeper. The chicken didn’t know what had hit her when they hatched, as they were a complete handful as they grew older. One eventually escaped and flew off.

So, what to do? Can I tick any of these birds or should I wait for them to fly somewhere else and tick them there?

The other debate recently was concerning the Scaup at Staines Reservoir, which I saw last Friday (although I went to the reservoir in the hope of seeing the Red and Black-necked Grebes, but they had gone). Some people I spoke to thought it was a hybrid, but then most of the time it was asleep and didn’t show its head, which would have helped with its ID. I did get some glimpses and to my mind the head shape was that of a Scaup, as was the bird’s general plumage. 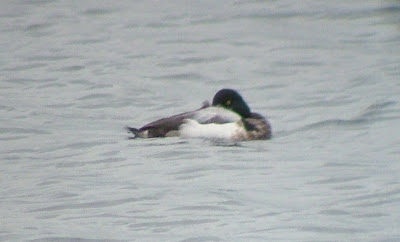 I'm looking forward to seeing my first Treecreeper of the year - at least I won't walk away scratching my head as to whether it was an escaped hybrid or not.
Posted by Factor at 15:52