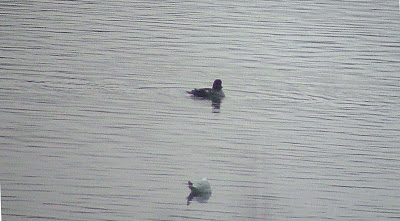 I took a quick trip to my local patch this evening to pick up some missing patch listings. I went over to Spynes Mere at Holmethorpe where I noted a couple of Shelduck among the gulls, but not much else. Over on Mercers West, the three female Smew were still present, along with a Goldeneye.

On the way to the local Tesco store on the Water Colour housing development I parked by the Fordbridge, where the Redhill Brook flows under the road between Mercers Lake and the two Water Colour Lagoons. I have regularly seen a Kingfisher perched on an overhanging branch or flying low along the brook, but today I saw a Water Rail for the first time this year. It was only fleeting, as it was soon heading for cover. It never reappeared, but nevertheless, it was mission accomplished.

It's good news that the Smew and Goldeneye have stayed put at Holmethorpe for a large part of the winter, having arrived at a similar time the year before. It establishes Holmethorpe as a plum site in Surrey for these species, in the same way well-known reserves such as Thursley Common are renowned for Great Grey Shrike in the winter.

It's worth making a note of the best places to see particular birds, as it makes finding them a darn site easier for relative novices such as myself. While I will happily venture to new and unchartered territories to see what may turn up now and again, I do need the odd tap-in sighting to keep my spirits up during those numerous days when I see next to nothing.

The concept of patch listing is starting to grow on me. There is nothing more satisfying than finding unusual birds in your back yard. Waxwings in Redhill, Bittern in Godstone. It means you spend more time in the field rather than - as has happened on too many occasions recently - spending most of my time driving around the countryside seeing bugger all.

It's like supporting your local football team. There will be good days and bad days, but once in a while the most unlikely event will take place. Who would have thought Crawley Town would end up playing Manchester United at Old Trafford in the fifth round of the FA Cup?

The thing is, if you wait long enough, something amazing will happen on your local patch. And when it does, it will stay with you forever.
Posted by Factor at 23:32