OK, so it was a couple of months since Annie and I were in Mallorca for the second time this year, but with the weather now here so wet and miserable, with at least four months of short, cold days to look forward to, never mind the endless general election campaigning (and as I write this it is only officially day two) to contend with, a brief revisit of a warm, sunny island in the Med certainly cheers me up.

We were there just for the week, the first of September, in a great villa set back in the hillside not that far inland from the S'Albufereta reserve in between Puerto Pollensa and Alcúdia. It was a great spot, with a great view of Alcúdia Bay.

And, of course, there were plenty of birds to enjoy. Our position wasn't so great for raptors and vultures, unlike our previous stays near the Tramuntana range, but all the decent spots for bird watching were very close by.

And from the villa, I managed to see some good stuff.

On day one, Saturday, we stopped off for lunch at our favourite restaurant in Puerto Pollensa, Celler La Parra, run by Alex Gual. Such a lovely man, and his mum originates from Croydon!

We normally do a few barbecues wherever we stay, but this time, frankly, we couldn't be bothered, and we decided to go for a late lunch every day at Celler La Parra, and will probably do the same the next time we visit the island.

There's nothing like that familiarity to help you relax and enjoy your stay. It's quite comforting!

Back at the villa, a trend began which continued all week. Regular bird visitors. The first was a Hoopoe. I saw three in one day here, but there was always one that flew over the villa, and on the very last afternoon, actually dropped down on the grass in front of me, just 10 yards away, to feed. 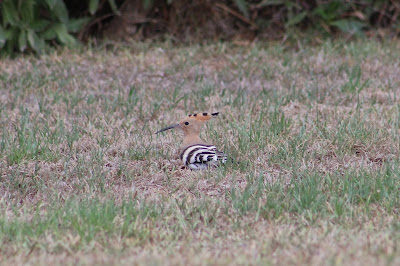 The second regular was a juvenile Woodchat Shrike. His parents also paid a visit on and off, but this little chap was always around. 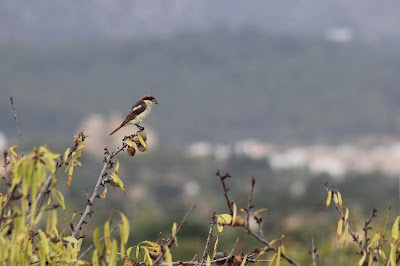 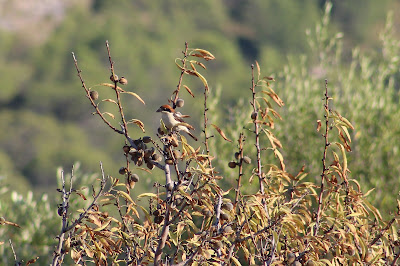 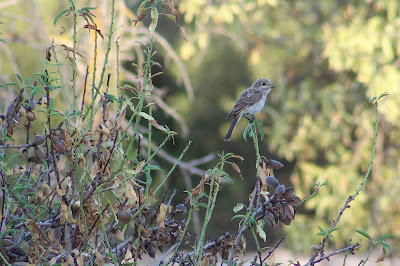 The third was a Spotted, sorry, Mediterranean Flycatcher and its persistent offspring, that hadn't yet quite got the hint it was time to literally flee the nest.

The fourth was a Booted Eagle. Pretty sure it was the same one that would arrive most afternoons, circled around towards the bay before cruising out of view. 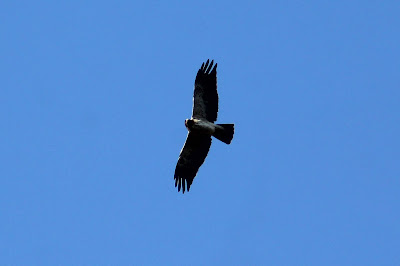 The fifth and the best was Bee-eater. Virtually every day from the Sunday onwards, at least 20 would fly over the villa, either in the morning or afternoon. I'm not sure if they were the same group or not, but as soon as I heard the unmistakable call, like someone trying to play a flute under water, it would cause me to leap out of my reclining sun bed to grab the bins.

And, of course, in the evenings, the shrill cacophony of Stone Curlew in the surrounding fields.

Stone Curlews were a major contributor to the holiday. I checked the Mallorca Bird Forum for any news on bird sightings, and one post stood out. it was from a guy called Kendalbirder, who had seen more than 40 Stone Curlew in a ploughed field on the outskirts of Puerto Pollensa, on the road to the Hotel Llenaire.

This I had to see! And low and behold early one morning I managed to see at least 25 Stone Curlew in this field. There were undoubtedly more in the there, but the undulating terrain hid many from view. An amazing sight.

Puerto Pollenca is a great spot for seeing Audouin's Gull, as well as Yellow-legged Gull and Shag. The La Gola reserve in the town can also bring up a few decent birds. A Pied Flycatcher was the highlight, with plenty of Mediterranean Flycatcher as a supporting cast.

What else... Well, I went to my usual haunts – the Boquer valley, S'Albufereta and Albufera reserves, plus Annie and I went to our spring patch walk along the valley close to the Tramuntana mountain range, where a Stone Curlew and three Firecrest were the highlight.

The S'Albufereta reserve revealed the usual suspects – Black-winged Stilt and Kentish Plover mainly, while the Albufera reserve gave me my first Marbled Duck, along with Red-knobbed Coot and Purple Swamphen.

I am always drawn to the dramatic, rugged and sheer rock vista of the Boquer Valley. No Balearic Warbler this time, but two Pied Flycatcher, one close to the car park and the other down in the valley, plus two Blue Rock Thrush close to the two big boulders on the path.

All in all, as is always the case in Mallorca, a wonderful week.