HOLMETHORPE PATCH ON A HIGH

While there are migrant birds dropping in all over the country at the moment with Hudsonian Godwits, Pied-billed Grebes and Great Blue Herons creating a mass migration of birders heading west these past few days, I'm sticking closer to home on my local patch.

Locally, there has been a few interesting birds to be tempted by like a Wood Warbler on Headley Heath yesterday morning, but it's Holmethorpe Sand Pits I'm drawn to at the moment whenever I get the chance to go out for a wander..

It's been great in recent weeks. I haven't seen all the birds that have come through lately but my patch list, both yearly and all-time, is growing day by day.

After the splendid male Ring Ouzel last week, which joined a female that went missing then reappeared a couple of days later, last Sunday turned out to be an awesome day for Holmethorpe. Unfortunately, I was heading east to Margate to visit my mum for the day (best I could come up with at Foreness Ooint was a female Red-breasted Merganser on the sea and plenty of Fulmar) so I completely missed out on one of the best days the patch has had in recent months, maybe even years.

I'm not sure why, but it didn't affect me as much is it would have done in years gone by – I'm just happy that after a quiet period Holmethorpe has suddenly re-emerged as a site worth watching. It has helped considerably we have more feet on the ground walking the area than we've had in a long while.

We had to bid bon voyage to Graham James, a Holmethorpe legend, who has moved to deepest Wales, where he has Dipper as a patch tick. Now that Graham has left, his old sparring partner, Gordon Hay, has kept the patch moving with his current sidekick Ian Kehl and together they keep me updated on sightings for the Holmethorpe blog each week.

We also have Ray Baker on board. Ray used to walk the patch some years ago and has now moved house and lives within the Water Colour complex and so can visit the patch regularly virtually every day. There are plenty of other very good birders who send me sightings too, with Matt Farmer, Neil Hadden, Richard Perry, who lives in Oxford but visits the area every week, as well as Jerry Blumire and the other patch legend Des Ball, who doesn't send in sightings but updates us when we meet up on occasion – he has a fantastic eye for spotting stuff.

Back to last weekend, the weather closed in overnight and, boy, did it reap dividends on Sunday morning. Gordon and Ian enjoyed eight species of wader, with Snipe, Dunlin, Little Ringed Plover, Ringed Plover, Common Sandpiper, Green Sandpiper, a probable Golden Plover over plus – rare for Holmethorpe – a Whimbrel fly over and, best of all, a Wood Sandpiper on the Water Colour Lagoon 2 island first thing.

They also had plenty of Warblers – Sedge, Reed, Garden and Lesser Whitethroat – plus Yellow Wagtail fly over and a Whinchat on the Moors. It was one of those days.

I was able to catch up with the Common Sandpiper later in the day, and the Whinchat, seen on the Moors from the Water Colour mound, and my first couple of Swift of the spring. The Wood Sand had long gone unfortunately.

Independently, Ray had a Wheatear earlier and Des had seen a Harrier, probably an Hen Harrier, heading north near the M23 at about 4pm. He was debating whether it was a Montague's...

This influx has set the tone this week, with Hobby on the list and on Monday morning a Tree Pipit, another rarity for Holmethorpe, seen and heard flying over by Gordon. Ray also saw a White Wagtail on the Water Colour Lagoon2 island and a pair of Common Tern on the pontoons on Mercer's Lake. I saw these fly off heading south later in the morning.

Ray found a couple of Wheatear on Nutfield Ridge on Tuesday morning and another cracking find on Moors Pools – a male Garganey.

These striking dabbling ducks are a bit of a patch bogey bird for me – I had never seen one at Holmethorpe. The last sighting was of a pair a few weeks back and I was working in London that day, and they disappeared the following morning. Similarly, I was in London all day yesterday when this drake was discovered by Ray.

Fortunately, I was able to get back just before it was too dark and connected with the Garganey on the Moors Pools by 8pm. It looked settled, happily feeding alongside a Coot, and I went for another visit in the rain this morning.

Holmethorpe is on a roll, and anyone planning a visit at the moment will enjoy a wide variety of species. 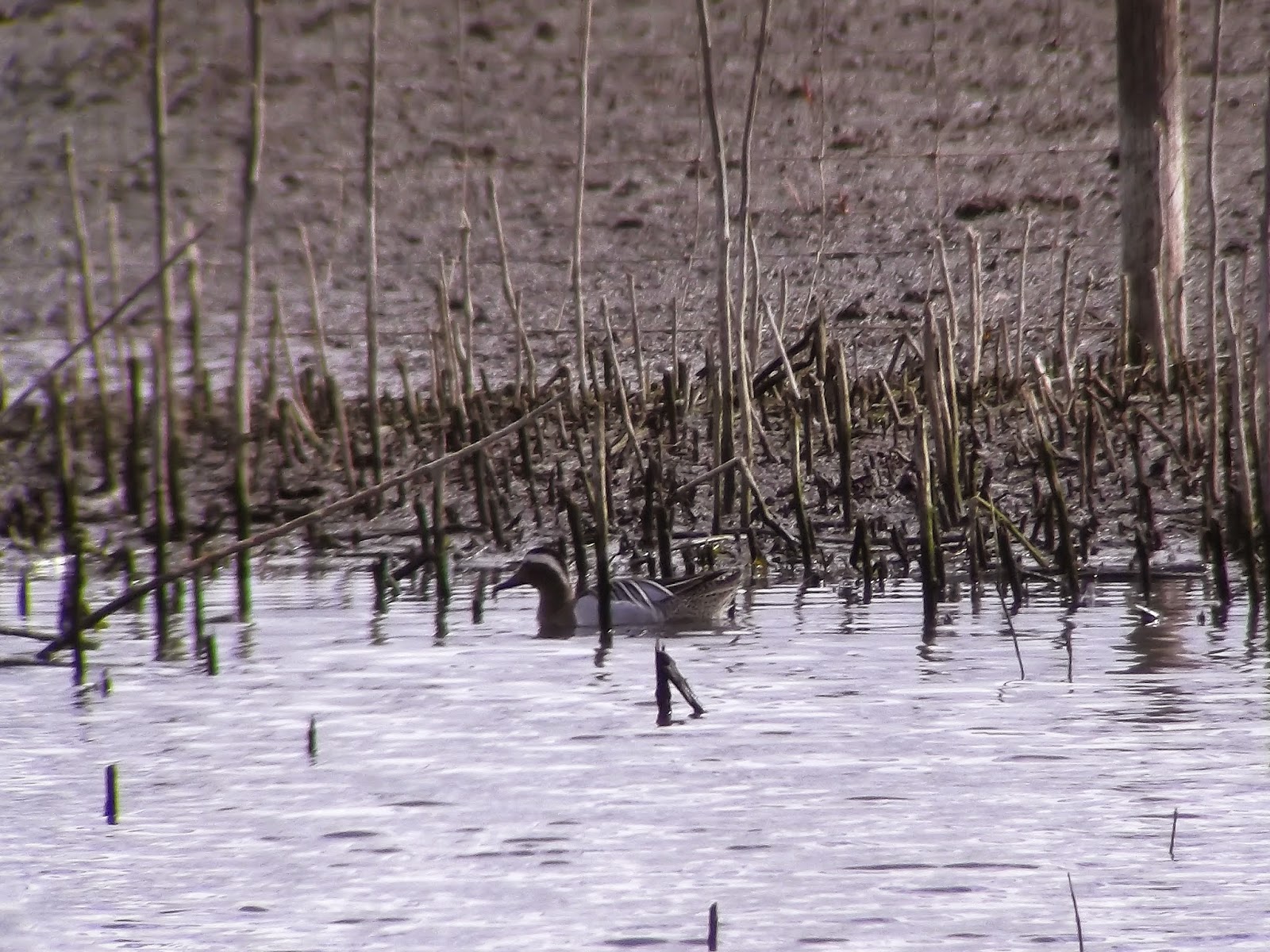 In the wind and rain yesterday morning there were at least 100 Sand Martin, with a handful of Swallow and House Martin feeding over the lagoons – a splendid sight – along with the Garganey. It was still there this morning, this time with the sun shining, and together with the waders, hirundines and warblers, there's something for everyone at Holmethorpe Sand Pits.
Posted by Factor at 12:02