ON THE LOOK OUT FOR POMS AT SPLASH POINT

I've not been on a seawatch since last year and this is the time of year when the charismatic Pomarine Skuas potentially migrate in large numbers.

These charismatic birds have been a bit late this spring compared to last. In 2014 vast swathes of Poms were seen all across the south-east and while I was late on the scene I still picked up three at Portland Bill in late May.

Without any three-day trips planned in the near future the closest place for me to seawatch is Splash Point at Seaford. It's an hour and ten minutes down the road, parking is straightforward and the views are pretty good. I don't why I haven't been more often.

I had a bit of time to spare a week last Sunday (May 3), and while the weather was wet and windy I was hopeful it could produce some decent birds. I was able to park the car facing the sea and used my drivers' side door as a windbreak while the rain was still coming down.

The weather was persistent, to say the least, and while no Pomarines flew by I got close-up views of three Arctic Skua close to the shore plus one chasing a Sandwich Tern. I also had decent views of Great Skua heading east. 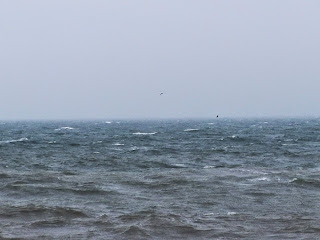 During the morning I saw one Whimbrel fly over, numerous Gannet, Common Scoter, Sandwich Tern, Little Tern, Common Tern and a couple of Black Tern. Also on my list were 15 Brent Goose and a pair of Shelduck., as well as the numerous Kittiwake on the chalk cliffs.

No Poms then, but still a good session. As things turned out Sunday, May 3 was the highlight of the next week...

I couldn't resist going down the next day – Bank Holiday Monday. The weather was in complete contrast to Sunday. Hardly breath of wind, and the sea was calm. It was hard going. During the day very little went through while I was there apart from three Whimbrel, one Arctic Skua, one Great Skua, one Red-throated Diver, one Little Tern and a handful of Sandwich Tern.

In between seawatching I went over to Eastbourne hoping to connect with the Red-rumped Swallow at West Rise Marsh that had been putting on a show early in the morning morning. In fact another Red-rumped Swallow had also seen there by Mick Davis but, alas, both had headed north and were never seen again.

So overall Monday was a bit of a washout. The only compensation was meeting up with a few birders I'd not met before, including Alastair Gray, who found the Alpine Swift in Crawley.

Work intervened for the next couple of days. In the meantime, stormy south-westerly winds forced up to 50 Pomarine Skua to head along the South Wales coastline with many travelling up the Severn Estuary rather than migrating further south and east towards Sussex.

On Thursday, I returned to Splash Point for another go. The weather was calm again, but with more movement of Poms during the past couple of days I was again hopeful I might at least see one or two heading east during the morning.

I was there to put together another live radio report with Annie, this time focusing on seabirds and the Kittiwakes breeding on the cliffs. I also wanted to capture the atmosphere of seawatching, explaining how the Skuas were heading to their breeding grounds in the Arctic with the sound of the sea in the background.

What didn't work so well was finding a Pomarine Skua. I had the company of some of birdings most experienced birders on Thursday – Lee Evans, Simon Linington and Geoff Gowlett to name but three – but despite their best efforts they couldn't conjure up one, even though 28 had passed through Portland Bill during the morning.

Lee, in particular, couldn't quite comprehend why not a single Pom had passed by Seaford. Somehow they all missed us. Maybe they travelled via the southern tip of the Isle of Wight and were further out to sea or they flew high up (as many had been reported) and flew over land, cutting out the eastern end of the south-east altogether. Whatever the reason, they weren't coming our way. 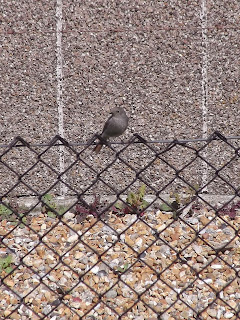 A huge disappointment then. The best birds found were birds I didn't see – a couple of Arctic Skua – although we had the bonus of a young male Black Redstart flitting about the sewage works behind the car park. I managed to see a couple of Sandwich Tern, a Whimbrel and a Peregrine over the cliffs – but very little else. It was desperately quiet.

In the meantime the Pomarines are still tending to fly west up passed Wales and on towards the Western Isles of Scotland. There is still a chance for a few to fly east, but time is running out.
Posted by Factor at 18:22