GRINDING OUT A GREATER YELLOWLEGS

I thought I'd add to my current dipping run and try for the Greater Yellowlegs on Saturday. I had work to do at home but thought I'd zip down to the coast in the early morning before heading back in time for a decent day in front of the computer. I should have known better.

The Greater Yellowlegs had been showing well most of the afternoon on Friday and seeing as the weather was OK and there wasn't much happening elsewhere locally, I was soon heading down the A3 towards Tichfield Haven.

The Greater Yellowlegs first appeared at Titchfield Haven in January. It would then disappear for days on end but now into its fifth month in Britain it has become a bit more settled and the risk of dipping has lessened.

Having said that, Paul Grennard travelled down from Liverpool recently and drew a blank, but took the decision to travel down again on Friday and got good views of it. He also managed to see the female Red-footed Falcon at Wareham the next morning.

While Paul was enjoying watching the falcon I was standing by the edge of the road on the coast waiting for the Yellowlegs to appear. There was very little activity. Ten Black-tailed Godwit dropped in, which lifted the spirits of all present, but there was really not much else about.

My only solace was enjoying the company of Rich Sergeant and Rich Horton, who had both come down to see this American wader that the same morning.

They left around midday with pressing engagements at home, but I stayed on. The best bird seen during the morning was a Black Swan. Thought I'd have a look just in case the species gets accepted sooner of later.

I got talking to a chap from Burton-on-Trent and we figured it might be a better option to drive up to Tichfield and walk down the footpath alongside the River Meon where the fields are flooded at Posbrook Flood. The Yellowlegs had often been seen there if it wasn't near the nature reserve hides.

It looked promising enough when we arrived, as there were plenty of Godwits feeding on the Flood, but no matter how hard we looked the Greater Yellowlegs was nowhere to be seen. By 2.30pm I was forced to call it a day. All very disheartening. Twitching can be such hard work and soul-destroying. Far better to visit an area and see what you come up with.

The bird wasn't seen all day.

When it comes to birds that have a habit of going awol for prolonged periods, the process of staring at a patch of water for hours holds little appeal after a time.

The annoying thing was I had debated whether to go to Wareham for the Red-footed Falcon, but decided not to because it was just a bit too far to drive to and get back home by mid-afternoon. In the event I could have gone to Dorset in the morning and popped in at Titchfield later. It maybe hindsight, but it would have been the obvious thing to do.

To add salt to the wounds, at around 10pm, someone submitted the news a Blyth's Reed Warbler had been seen near Forest Row at around midday. I can never figure out why it takes ten hours to get the news out, especially as these Warblers don't tend to stay put for very long. Predictably, it had gone by the next morning. Not much was made of it, which makes you wonder if it was there at all.

I was busy on Sunday so I was heading down the A3 again on Bank Holiday Monday. This time I went straight to Posbrook Flood. Twitching success does depend a lot on understanding the habits of the bird in question. as a rule of thumb, when the tide is in the Yellowlegs will not be seen down by the coastal road. It is always more likely to migrate to the Flood. When the tide goes out it flies back south.

What a difference a day makes. A birder walking back up the footpath gave me the good news the bird was still around. That was a good start. I bumped into a couple of guys along the path watching the bird and one of them let me have a look through his scope. So within a few minutes of my arrival I was watching the Greater Yellowlegs.

Having been the day before I knew of a better vantage point and led the way to the path. The Greater Yellowlegs showed well. What a relief. I also had plenty of good banter with Jonathan Nasir from Hackney, who writes an excellent blog called Random Birder.

Jonathan left before me, and about 15 minutes later the Yellowlegs, which was now calling, flew to a spot closer to the path. 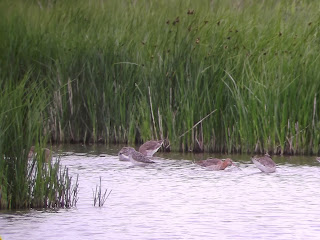 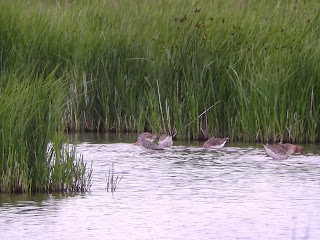 A few more people arrived just as the Greater Yellowlegs took to the air again and flew overhead, calling on its way back down to the coastal area. Job done.

I put the news out on RBA that it had flown south as I headed back to the car.

I really felt sorry for one old boy, however, who just saw the bird fly overhead as he arrived. He was obviously hindered by either hip or knee problems as he was using two crutches to get about. He'd come all the way from Plymouth to see it. As he had a car, I waited for him to get back to the car park and suggested he follow me so I could show him the lane that to led to the coast.

The Yellowlegs showed well for the rest of the day so I hope he managed to see the bird properly in the end.
Posted by Factor at 18:26