Well, I studied weather charts and birding sights for the past ten days in the the vain hope of working out the best day to go for one last try for a Pomarine Skua flying east along the English Channel at Splash Point at Seaford.

It was always going to be a tall order. The weather has meant all the sexy Skuas were determined to fly up the west coast. Hardly any bothers to  head the other way.

Huge numbers of Poms passed the Outer Hebrides and up beyond Orkney, having joined forces with a staggering number of Long-tailed Skuas, including one day when 1,307 flew by.

It has all been a bit disheartening – not if you are a Scottish islander obviously – but time for us southerners, as I've mentioned before, was rapidly running out.

Add to this issue is the fact so many decent birds had been spotted around the coast, including above average numbers of Golden Oriole, including at nearby Beachy Head. How I would love to see one of those this spring.

In the meantime, I managed a brief visit to Farthing Downs on May 12 having dropped Annie off for an appointment in Coulsdon. I only stayed for about 45 minutes but came across two Whinchat in the breezy conditions.

Then on May 14, the winds changed direction and we had easterlies on the menu. They weren't exactly strong winds but they were coming from the east and that was all that mattered.

So yet again early in the morning, I trundled down to Splash Point.

Let's cut a long story short. It was rubbish. Not one Skua of any type was seen during four hours staring at the sea. The best I could come up with was a male Eider on the beach, which was interesting in itself (although the bird may not have been 100 per cent fit), a Hobby in off the sea pursuing another bird – but I couldn't work out what that was – a handful of Sandwich Tern, the local Peregrine, an auk, which I think looked like a Razorbill, and 11 Brent Goose with a clutch of Sanderling and one larger unidentified wader flying ahead of them.

While I was staring at the sea an elderly chap came over for a brief chat. I explained not much was happening, but that someone had been fortunate the day before to have a Golden Oriole in their garden up on Beachy Head. It turned out to be him! Roger Charlwood lives up on Beachy Head and the Golden Oriole flew into his garden where it stayed for half an hour, singing on occasion. One of those moments that would stay in the memory for many along day. 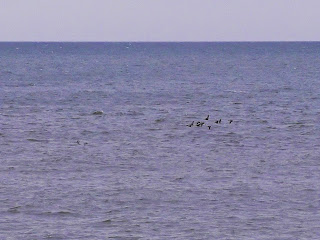 Another disappointing morning for me, however. But that paled into genuine insignificance compared to what happened later in the day...

The weather began to close in as I left Seaford. I travelled back home before setting off to London Bridge for work at the Daily Star. I left home at about 11-ish, and had contemplated going over to the patch to see if anything had dropped in as the rain set in, but as time was pressing, and I wasn't feeling particularly upbeat following my morning's entertainment, I headed off for the station instead.

There are always a few periods during the day I can scan the websites to see if much has been happening around the country, and Rare Bird Alert is always my site of choice.

Annie always suggests to me I shouldn't scan RBA when I'm busy doing other stuff as all it will do is create stress and misery I can't drop everything and go and see an interesting bird.

Then it happened. That moment when your jaw drops to the floor.

In recent weeks I had been predicting a Red-rumped Swallow would grace the Holmethorpe patch. To me it was only a question of time, particularly as the Water Colour lagoons act like a magnet for hirundines, particularly when the weather closes in.

And so it proved that afternoon.

Gordon Hay went out for a brief look at about 5.15pm, and he immediately found it. A Red-rumped Swallow. A first for Holmethorpe, and only one of two sightings around Britain that day. The lagoons were a carpet of hirundine activity, with this one little beauty in amongst them

I saw the news on RBA, and was immediately in a panic. The earliest I could get out of the office was 6.30pm and because it was so overcast with low clouds full of rain, it would mean a race against time to get to the patch before it was too dark.

I set off at 6.40pm – I ran to the station, dodgy knee and all. I had to change at East Croydon but got to the lagoons by 8pm. There were hardly any hirundines to be seen. I rang Gordon and he told me the bad news. A Peregrine had swooped through the flock about an hour previously and had scattered them all.

One of the Holmethorpe crew, Matt Farmer, turned up and I told him the news. We knew pretty much that it was hopeless. There were a few Swallow around but we couldn't locate the Red-rumped.

The following morning I was on the patch by 5.15am. I met Gordon and we scanned the skies. Plenty of hirundines arrived, including at least 70 Swallow but no matter how hard we looked, the Red-rumped Swallow was nowhere to be seen.

I stayed until 10.30am. The Swifts, Swallows, House Martins and Sand Martins developed into a large flock, often perching in the bushes on Water Colour lagoon 2. It was quite a sight – a shimmering curtain of birds in the undergrowth.

At one point a Hobby scythed its way through the feeding flock, creating panic for a while, and a Lesser Whitethroat sang in the bushes. But that was it. The Red-rumped Swallow had clearly gone.

Feeling crestfallen doesn't really describe my emotions over that 24-hour period. Resignation, certainly. Some sadness, too. But I had to accept, and do accept as a birder you have good days and bad days.

A few days later Gordon struck lucky again and had an Osprey fly low south-west towards Earlswood Lakes. He's going through a good run at the moment and it's fantastic we have a very keen group of birders patrolling a patch that is on a roll, even if I'm not.

It's been a great spring for Holmethorpe and long may it continue.
Posted by Factor at 20:48