I've been on a lucky role of the dice twitching this past few weeks and yesterday I went for what Steve Gale would refer to as another attempt to role a six. The difference between twitching the Greater Yellowlegs and the Red-footed Falcon compared to the White-winged Black Tern at Wareham in Dorset, however, were two-fold.

The first was the distance to travel, which in the White-winged Tern's case was twice the travelling time – more than two hours. The second difference and perhaps more troubling was that with the Yellowlegs and Falcon I was pretty certain each bird would still be there when I arrived (the Yellowlegs was elusive but has stayed in the area since January). The trip to see the White-winged Black Tern was based more on pure optimism rather than certainty.

Twitching is a troubling side to birding – well, it is for me at any rate. For one thing it can only be a satisfying experience if you see the bird in question, and even then the first emotion is more a sense of relief. If you fail to connect with the target the sense of disappointment can prove utterly soul-destroying. A form of mental torture. I had that feeling when I first arrived at Swineham Gravel Pits, but more of that later.

As time has gone by I have come to learn that twitching for me is a necessary evil. I want to see new birds and the only way to guarantee that is to twitch, particularly as to my location in Surrey is probably Britain's worst county for rare bird sightings.

Another issue with twitching is its tendency to become addictive. I've spoken to many birders who have continual battle of wills with respective partners because of their birding 'habit'. Birding, and particularly twitching, is a breaker of relationships. There is nothing a partner resents most than for the birder to continually put his needs before theirs. It generally doesn't work without clear boundaries.

The other areas of birding do have there limitations, unfortunately. While patch birding has its wonderful moments, once the migration season had come to an end there is not a great deal new to see. It can become very dull for long periods, interspersed with short bursts of high eleation.

I've concluded that my ideal birding experience is to stay for a few days in one particular area renowned for good birds and see what I can come up with. A virtual world of discovery. With that in mind I intend to spend a few days away around September 20 (my late dad's birthday). I'm not sure where yet but I will be influenced by the weather.

Back to Wareham, I was lucky with the weather yesterday as it was truly a lovely morning when I got out of the house at 5.45am.

The journey down to Dorset was relatively straightforward with breakfast on the way and apart from quite heavy traffic I arrived just before 9am. I knew the Tern was still present as someone had put the news out about an hour earlier.

Another birder was just walking down the footpath, heading towards the lake and I gathered my stuff and followed. Another chap was walking back and confirmed the bird was showing well and also gave me directions. A Cuckoo sang – my first of the spring. A Hobby flew south. So far so good.

I got to the viewing point just as the birder who arrived just before me was putting up his scope. He had just been watching the tern flying up and down the water for about a minute before I arrived. But it had just disappeared.

Minutes passed and still nothing, and then another birder approached from the east side of the lake and asked if we had seen the tern. My companion said he had. "That's good," said the other birder, "did you see it fly off?"

"Fly off?" I interrupted.

"Yes, it has just flown off in the direction of Poole Harbour."

"You're kidding me. Does it tend to fly back?"

"Yes, but I couldn't say when. Probably later this afternoon – or this evening."

Oh, for fuc...  The White-winged Black Tern had departed literally as I had arrived. It had taken me, with a stop, more than three hours to get there and the bird decided to fly off LITERALLY as I stopped to look over the lake. You couldn't make it up.

Except you could. This sort of thing happens a lot with twitching. Many a birder has a torrid tale to tell of a failed twitch. It's a nasty old business, as I was experiencing at 9.10am yesterday morning.

I had to get back home for the afternoon so this was truly awful news. I tried my best to contain my anxiety and stress. I like to compare it to the stress Lewis Hamilton must have felt when he exited the pitlane at Monaco to discover his Mercedes team had made a huge cock-up and what was going to be an easy victory after a faultless weekend had turned into a nightmare and a derisory third place (tongue-in-cheek this, obviously. This was much worse).

Hamilton was able to get over that, and so I could do the same here.

After gathering my senses into some sort of rational and philosophical perspective I followed my two birding companions around to the eastern edge of the site to look across at the reeds and a female Marsh Harrier flying low to the south. Very nice, but I really couldn't give a toss at that moment.

As we were watching this I looked across at some gulls flying about to the north. I thought I noticed something darker flying west. Probably a pigeon.

And then another group of birders below our original vantage point beckoned us. The tern was back!

What a blessed relief!

A brisk walk back to our vantage point and a quick look through the bins and there it was.
The White-winged Black Tern was once again flying up and down the lake feeding as it went.

The stress immediately ebbed away.

What a striking bird it was. In full summer plumage this stunner stood out like a beacon against the backdrop of green leaves and blue sky with its mix of jet black, grey and white.

Black Terns are a joy to watch but this bird... well, you simply couldn't take you eyes off it. 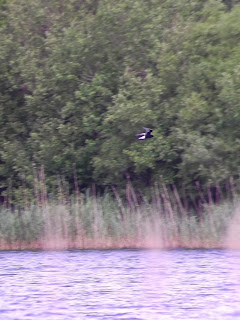 I spent the next hour watching this graceful and agile Tern swoop and dive for food. A sight you could never tire of watching.

I had struck lucky once again. The last two lifers have been birds so enthralling to see and to watch in action.

Birding is always about being in the right place at the right time. That afternoon back in Surrey, a few miles from where I live, two Bee-eaters were seen at Betchworth Quarry. They may have flown over Holmethorpe earlier, who knows?