A belated happy New Year to one and all. It's nearly February already – and that can only mean spring is around the corner.

January has flown by, with just the odd smatterings of birding along the way. I actually spent two days walking the patch, which was very pleasant if uneventful.

All had been quiet on the Holmethorpe front this month, until Gordon Hay struck gold at the weekend with his first Bittern on the patch, only the second in more than 30 years, which he saw circling Mercers West before it flew towards Mercers Lake.

Gordon managed to get a record photo of it for good measure, but predictably it was not seen again, presumably continuing on its journey south.

But what a great patch tick to start the year! I've not had such good luck on my two visits, but it just goes to show you simply have to be out there to discover great birds. You're not going to find anything staring at a computer screen all day as I often have to do.

Luck plays such a big part in birding. It is dictated by being in the right place at the right time. It doesn't happen that often, but when a good bird appears out of the blue, it makes all the predictable days worthwhile.

Highlight of my birding month came on the 3rd, after taking my mum to a hospital appointment in Whitstable. On our way back to Margate I stopped off at the local Tescos in Cliftonville to pick up a few essentials for her, when I heard a familiar high-pitched flutey call.

Waxwings! Sure, enough feeding on berries in a tree in the car park were five Waxwing. What a result! They flew to another tree, and stayed just long enough for me to get some video footage on my iPhone. As is normal at times like this, I didn't have my camera with me.

Apart from that I've not really been anywhere, apart from the NEC in Birmingham for four days for Autosport International, the motorsport show, where it was great to catch up with former colleagues and familiar faces.

Back at home I managed to pop out last Saturday to see the wintering juvenile Rose-coloured Starling again in Crawley. An easy bird to spot when it perches in its favourite tree, this is an interesting bird as it is gradually changing from juvenile into adult plumage. It would be nice if it hung around long enough to complete the metamorphosis. 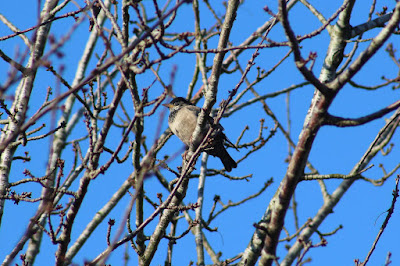 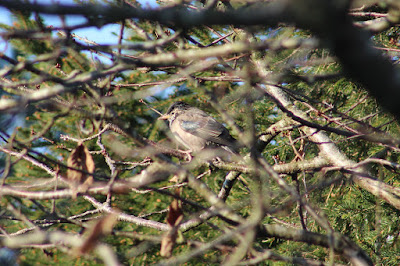 In other news, the Stejneger's Stonechat at Dungeness I went to see transformed back into a common Stonechat, while the Blue Rock Thrush I didn't see is still either a genuine wild bird or a plastic one – it's anyone guess. I still haven't made the effort, and it is likely to disappear come the day I change my mind (which I don't think I will).

What I hope to see at Holmethorpe in the next few weeks is one of those Waxwings. They are being seen regularly now all over the place – I just need that little bit of luck again when I next go for a visit to our local Tescos near the patch.
Posted by Factor at 19:03