One of the prevalent species this autumn has been that delightful little bird, the Phalarope. There have been plenty of sightings of Grey Phalarope around the country during the past couple of months, as well as decent numbers of Red-necked Phalarope.

Add to the list a showy Wilson's Phalarope at Oare Marshes, that is still present as I write this, and you may have easily have had the full set.

The first two were on my radar last month, when a Phalarope sp. turned up at Staines Reservoir on September 11.

The south basin at Staines Reservoir had been drained of water in the preceding weeks and had certainly delivered the goods on the wader front once the water levels had dropped. It made you aware of how many birds must fly over the area but decide to continue their journey rather than dropping in to a not-so-enticing habitat.

But now the environment was intoxicating, both for birds and birders.

The Phalarope appeared on the south basin, where it joined a Pectoral Sandpiper, 4 juvenile Curlew Sandpiper, 4 Knot, 3 Black-tailed Godwit, a Sanderling, a Ruff, plus plentiful numbers of Dunlin and Ringed Plover.

But swimming happily at the far end of the basin, at the time of its arrival it was unclear which of the two, Grey or Red-necked, it was. The consensus was perhaps a Red-necked. That was certainly my hope. It was be a lifer if it was.

And that uncertainty was still the case when I arrived along the causeway the next day, for the first time since the three white-winged Black Tern earlier in the year at "The Res".

It was great to see a familiar pair of faces as I arrived, "Captain" Bob Warden and Dave Carlsson were there that morning, and Bob immediately put me on to the Phalarope, happily bobbing away in the distance.

The south basin was full of waders. No Pectoral Sandpiper, and the pair of Knot went missing too, but there were numerous Dunlin and Ringed Plover, a couple of Greenshank, at least five Ruff, and the same number of Curlew Sandpiper. A great sight.

Bob had a Merlin fly through about half an hour earlier, and as more birders arrived, the debate got more prolonged as to to the id of this Phalarope. It meandered both ways and in the end the consensus was it was a Grey – which, while nice to see, was a tad disappointing from my viewpoint!

To cut a long debate short, however, the bird gradually migrated closer to the causeway over the next couple of days, and its id was confirmed to be a Red-necked Phalarope. Celebrations all round!
A few days later a Grey Phalarope actually did turn up on the north basin.

Fast-forward more than three weeks to October 3 and the long-staying Long-billed Dowitcher at Oare Marshes was joined by another rare American vagrant – a Wilson's Phalarope. I had only seen one before, and that was at Vange Marshes and was very distant, so last Sunday was a welcome opportunity for a closer view.

I have been to Oare and Dungeness more than any other site this year – I really like both places. Oare is nice and easy to get to, it's compact, viewing is excellent and there is always something to see. Like this Wilson's Phalarope. 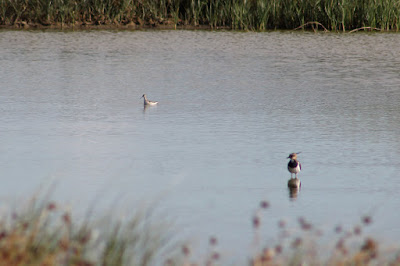 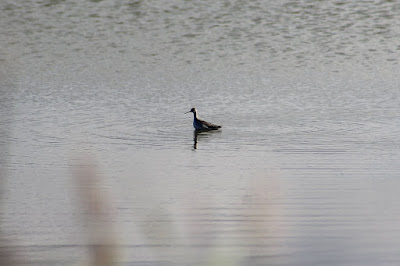 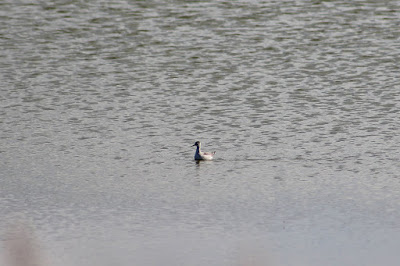 It didn't let me down either. It performed very well, including its trademark spinning while feeding. The Long-billed Dowitcher also showed well, as did a couple of Little Stint.

All the birds went up into the air when a Peregrine paid a visit for a hopeful meal, which was an opportune moment to head back home for a decent Sunday roast.