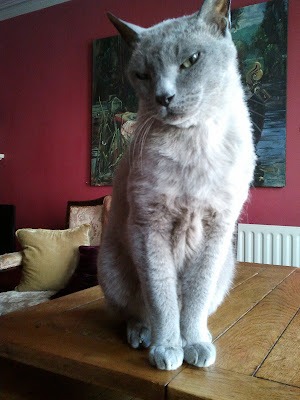 It's been three weeks since I last posted anything. I haven't felt like it, to be honest.

Annie and I have been married for 19 years, and for more than 17 of them we have had two Burmese cats, Billie and Cato. These two have been part of the very fabric of our life together.

Cato came first. He was a handsome blue Burmese boy kitten, so full of personality, you could be mistaken for believing he was a small person in a catsuit. As an adult he was full of energy and had a fun for life. He was handsome, athletic and strong, such a comedian, and very loving. We've never known an animal with such a sweet, generous nature. Everyone who came into contact with him loved him. We loved him, too.

Billie, a blue Burmese girl, arrived six months later. For a cat, she is very bright. They call Burmese cats the dog cat, because some of their behaviour is similar. If you throw them a ball of paper, they will retrieve like a dog.

Billie is a feline hoover. Loves food. Obsessed with food. Aloof as a youngster - you couldn't pick her up for wriggling, trying to escape. Now though, as she has got older, she is adorable. We love her to bits.

In May, Cato went for his annual booster jab and check-up. The vet, Andy Trevan, who owns the Gayton Veterinary Group, was full of admiration of his overall condition. For a 17-year-old cat he was in fantastic nick - and given a clean bill of health.

But then about three months ago we noticed he had started to lose his appetite. Only gradually, he was still as vocal and and as active as ever, but he began to lose weight. Then two months ago we decided to take him to the vets to find out what the problem was.

After a barrage of tests, nothing could be found wrong - maybe a virus, they said. Then he got worse. Eventually, it was discovered that he had a separated jaw at the chin end - being clumsy he must have bashed it. It was the repeat of something he managed to do some three years previously, which meant it was painful for him to eat.

Back then he had it wired up, only for the vet to discover he had a swollen kidney, and he needed to be operated on immediately. It was a worrying time, but he was a tough lad and got through it. He batted that off, no problem.

And so, two months ago he went through the same process with the jaw again. We thought that was the end of our concerns. Problem solved. But no.

He still lost weight and wasn't eating like he should. Into the vets again, and this time he had x-rays done on his chest - the vet didn't like the sound of his breathing. It was bad news. Cato had fluid on his lungs and once that was drained, it was discovered he had a mass on his chest. The biopsy came back. He had a malignant cancer and it was inoperable.

Since then Cato had been on chemotherapy - a treatment which has had positive results with oriental cats. For a time he rallied and started eating well again. He was still losing weight and getting very tired but for all of that, his spirits were good. If they hadn't been we would have taken the difficult decision and eased his suffering.

On Friday, Cato was the happiest he had been for some time. He was talking to us like he hadn't done in a while, purring and was like his old self.

Then on Christmas Eve he went downhill fast. By the evening he was very weak. After a nice massage and fussing session with Annie and I in the evening, he climbed on to our bed - his favourite place to rest, and feel asleep. He woke momentarily and looked at Annie. She soothed him and made him rest his head back down on the duvet. He then drifted off to sleep again. Billie - his companion for 17 years, Annie and I were with him.

He didn't wake up again.

At 11.45pm of Christmas Eve, Cato - our beautiful Burmese boy - passed away. We will never have another animal quite like him. He was very special and we will miss him terribly.