I'm really enjoying my local patch at the moment. Maybe it's due to the weather and I therefore don't have the urge to travel too far to see something different, or maybe it's just that finding a bird on your own doorstep is somehow more gratifying.

Whatever it is, I'm on a decent run. My patch list isn't fantastic, it's only on 57 - I've still to see a Kingfisher, Siskin or Little Owl out of the regular birds at Holmethorpe this year - but every time I have been out for a walk on the patch recently I have managed to see something new. It certainly makes up for a dismal run during the summer and early winter when I didn't manage to see anything noteworthy - it was starting to really get me down. To cap it all I couldn't locate the Garganey or the Firecrest between late November and December - and the Garganey had stayed for about two months.

So 2012 has started off well locally. After locating the first Dunlin seen by anyone on the patch this year last Thursday, I added four more on Sunday. I also caught up with a Curlew, a number of Pintails, a Goldeneye and a number of redhead Smew. I was also happy to find a Water Rail by the Fordbridge brook. These are all great birds for the patch. 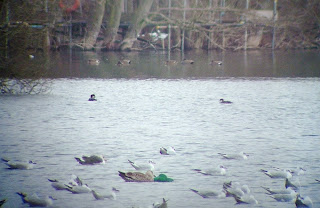 Then this afternoon, I struck lucky again with a brief visit to Mercer's Lake and the Water Colour Lagoons. There were a stack of gulls on Water Colour Lagoon 1, where the ice hadn't formed on the lake. I had a look to see if I could find anything unusual but no joy. I then took a short walk over to Mercer's Lake and it was while scoping across the lake looking for Smew - I saw four redheads - that I caught sight of an unusual gull. Its head was almost all black, and it had a noticeable red beak and eye ring. The wings were white. It was a Mediterranean Gull in amongst the Black-headed Gulls. I was in the process of taking a photo when it flew off in the direction of the Lagoons (where it was nowhere to be found). Med Gulls aren't that common at Holmethorpe but there have been plenty at neighbouring Beddington recently, so one was due to drop in at some point. My Surrey year total is now on 98.

Being relatively close geographically to Beddington, Holmethorpe can often share the same species of birds. An Iceland Gull seen on Mercer's Lake last month was a bird that often visits Beddington. Any number of birds flying over Beddington heading south can end up over Holmethorpe (not that I have ever seen any!). When they get Dunlin, we're pretty sure to get one or two. If Curlews are flying over, one might drop in at Holmethorpe - as it did over the weekend.

This isn't always the case, however. I think it's a seasonal thing. Holmethorpe tends, from what I've noticed, to have plenty of decent birds appearing during the winter, but come the summer sightings can dry up. Why, I'm not sure. It may be because Holmethorpe is a low-lying region with hills all around. Migratory birds might overlook Holmethorpe and target the higher ground before taking a rest - further up the road is Canons Farm, and they had Ring Ouzel, Whinchat, Black Redstarts, a number of Grasshopper Warblers and Quail. We had the first three either briefly or for a day or so.

In 2011 Beddington had more than is worth listing. Many were flying over - Beddington is certainly of the flight path for many migrants - but they also had Pectoral Sandpiper, Ruff, Curlew Sandpiper, Little Stint and Wood Sandpiper to name but a few. They often get Lapland Bunting and Snow Bunting. Then again, Beddington has a whole army of patch watchers to keep an eye on the skies and the scrapes for pretty much seven days a week.

What we need down here, though, is another bird like the Ferruginous Duck a couple of years ago to get people to visit this excellent site. As local patch master Graham James often says, the more people who walk the area the more likely a really rare bird will be discovered. I'd better get out there and practise what I'm preaching...
Posted by Factor at 21:27