I have a habit of reading my previous posts a few days after they've been written and often find glaring errors in the copy. It shouldn't bother me really, but it's truly toe-curling considering that one of the things I do for a living is sub-edit for a national newspaper.

With that in mind, it just shouldn't happen. There is no excuse. I should be more careful (I wrote inner 'piece' in the last post rather than inner 'peace'! Unbelievable – I've changed it now), but I usually race through it and fit writing this around the trivial matter of earning a living and having a normal life (whatever that is).

I read Steve Gale's blog today and his response to my recent tale of woe and felt immediately reassured. I had lost my perspective, took my eye off the life ball. I need to relax. Chill.

Unfortunately, I also have to accept that I'm someone prone to addictive pursuits like birding. Once upon a time it was horse racing – my work is still predominantly based on this sport – then motorsport (I still dabble) and now it's birding. I've no idea how all these are linked but there it is.

I look at the well-known twitchers among us, Garry Bagnell is one that immediately springs to mind, and I realise that birding can be, and no offence to Garry, like collecting stamps or trainspotting. It's about enjoying watching birds perhaps but it is also equally about collecting things, and blokes with addictive personalities like collecting things more than an enthusiastic Jackdaw.

I've mentioned this before, but I don't really fit into any birding camp. I neither patch list nor twitch, but sometimes I do both. I suppose it doesn't really matter so long as you enjoy what you're doing. On that particular front, I'm always on a roller-coaster. Some days I'm up, others I'm down. And the down days are always worse than the up days.

Yesterday was most definitely an up day. It couldn't have been much better.

After Easter Monday's success at tracking down the Staines Moor Ring Ouzel, I went back for some more Ouzel-watching this morning. I got up early and was at the south end of the Moor for 6.30am. What a difference a day makes. On Monday, the weather was awful, but yesterday it was fantastic. The air was still, the sky was bright and blue. The sun shone brightly. Perfect.

Maybe too perfect. If the weather is good, there is always the concern that a Ring Ouzel may be tempted to set off for its northern breeding grounds.

I was met at the bridge over the River Colne by top Surrey birder, Kev Duncan – it was his first visit to see the Ring Ouzel. I felt like an old hand.

Almost immediately we stepped over the bridge I spotted the handsome male Ring Ouzel perched in a bush. Amazing. It took just a few seconds to find it – it was hard to miss its brilliant white chest in the bright sunlight. 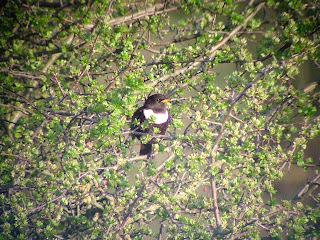 We managed to edge closer and I was able to fire off a few digiscope photos that I was quite pleased with. The quality of my photos isn't great but I maintain that is mainly due to have a ten year-old Fuji Finepix camera and a knackered Opticron scope that got smashed when I fell over last summer. I managed to glue the prism back in place and then wrap the casing back together with gaffer tape. It works perfectly well.

Kev left after about half an hour but I stayed on to enjoy at least another hour watching this magnificent bird fly around the area and feed around the anthills. It was the best view of a Ring Ouzel I have had.

I also managed to see three more Wheatear, but they were flighty – you couldn't get so near as 50 yards from them before they flew further away, and a Little Ringed Plover by the edge of the river.

So that was Staines Moor. I arrived back home at 10.00am satisfied and able to concentrate fully on work...

At 4.30pm I got a text from Kevin 'Kojak' Guest. I haven't seen Kojak for more than a year but had heard he was back on the birding scene. He was on Nutfield Ridge hoping to see a Red Kite, but instead he'd just seen a Raven fly to the landfill site on the edge of the Holmethorpe patch.

This Raven had been seen a couple of times over Easter, and it had probably discovered the landfill on its travels.

If you go to South Wales, you will see and hear Ravens all the time, but in Surrey they are very rare, so while I had already seen one in Surrey earlier this year at Crooksbury Common, I hadn't seen this one on the patch.

I met up with Kojak in Nutfield Cemetery, where you can see the landfill site really well, and it wasn't long before we saw the Raven fly back to the rubbish tip and then return to the trees behind us, but out of view. 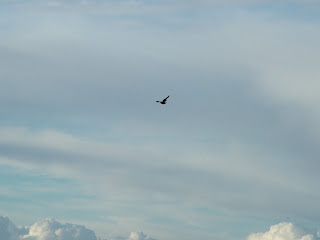 It repeatedly migrated from the cemetery to the landfill area, and could be seen spotted on the rubbish tip when the rest of the Carrion Crows took flight to mob it – its size compared to the crows was a give away, as was the pronounced bill. A brilliant bird to see on the Holmethorpe patch.

A day in complete contrast to Sunday. Really enjoyable. What a fickle person I am...
Posted by Factor at 00:47