It's been a bit of a struggle this Easter break. Good Friday morning was spent on Staines Moor in the vain hope of finding a Ring Ouzel. Nothing doing, but at least I caught up with my first Wheatears (116) of the spring – three females. They didn't hang around for long as the one dog walker on the Moor at 8.00am happened to walk right through the middle of them. One record shot was all I could get.

I also connected with my first Willow Warbler (117) on the walk back to the car but that was about it.

I found Staines Reservoir very hard going too – I just couldn't find anything interesting apart from a Redshank and a Little Ringed Plover. There were many gulls on the basins, but finding a Little Gull (my target bird) simply wasn't happening.

I have a habit of letting my head drop in these situations. I should just take my time and eventually the birds will come into view – but I get a sort of birding blindness when I'm feeling stressed (which is quite a lot of the time at the moment). I don't have inner peace – it's almost certainly because of other matters closer to home. Work, illness in the family – both Annie's and mine – and a lack of funds to get certain jobs done, like finding a new engine the Peugeot 206. My mojo has been on hold.

I resigned myself to the walk down the causeway back to the car and the drive home when I bumped into Tice's Meadow birders Dave Baker and Rich Horton, who had just arrived.

It wasn't long before they were able to steer me on to a Little Gull (118). It was a long way out but at least I could distinguish it from the larger Black-headed Gulls.

Later in the afternoon, I popped over to the patch and found the drake Scaup with some Tufted Ducks on Water Colour Lagoon 2 next to the island in the middle of the lake.

This male has been on the patch for the entire winter and beyond. It has developed into a really handsome individual and, interestingly, was displaying in front of some of female Tufties. It wouldn't surprise me if we have a few hybrid Scaup/Tufted Duck chicks swimming around in the coming months. 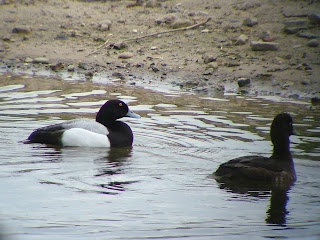 So that was Good Friday – OK, but not totally satisfying. We were out all day Saturday, and I made the fatal mistake of looking at Twitter for any birding updates at lunchtime.

Annie gets exasperated when I do this. I should just leave Twitter, Rare Bird Alert and email alone when we're out. If a Common Yellowthroat turns up a mile from my house when I'm away, there's nothing I can do about it. By looking for trouble I end up finding it and the result is anxiety for me and for anyone around close by (normally Annie). It takes all my willpower to find some steel to force myself to make the best of it.

So I looked at Twitter, and staring at me was a tweet from Adrian Luscombe, local Staines birder and regular Tweeter. 'RING OUZEL - male - Staines Moor, now!!! Also Cuckoo'. I couldn't believe it. The one day I'm away and a key bird of the spring migration turns up. Great. Bloody marvellous.

The problem with migrating birds like Ring Ouzels is that you can never tell how long they will stay before they head further north to their breeding grounds. It could be a day, a few days, maybe a week if you're lucky?

Fateful episodes like this happen so regularly I'm beginning to wonder whether there is some form of Devine intervention taking place. I'm not even faintly religious but I wonder why this happens so often.

Saturday came and went. We had a very late night and yet I was still determined to get up early and travel around the M25 to Staines.

I managed to drag myself out of the house by 7am on Easter Sunday after just over three hours sleep, and 45 minutes later I was walking down the footpath next to the King George VI Reservoir towards the Moor. The weather wasn't great - it was dull, misty with rain in the air. The heavy clouds didn't really lighten up – and neither did I as it became clear I wasn't going to find the Ring Ouzel. There were plenty of other birders around – not always a good sign – but this Ouzel had either moved on overnight, or was steadfastly keep its head down.

What I did see, however, was a Tree Pipit (119). An unusual sighting for the Moor and quite early too.  At first I thought it must be a Meadow Pipit but it sang like a Tree Pipit and it behaved like one too, climbing up from its perch, singing, before descending down again with its distinctive parachute flight and flight song.

After a couple of hours I left for Staines Reservoir, where I saw the Shag swimming close to the causeway on the south basin, plus a couple of Little Gulls, and a beautiful Black-necked Grebe, resplendent in its summer plumage.


I didn't stay long and on the way home made a diversion to Godstone and a stream that runs near Leigh Place to find a Grey Wagtail (120) to add to my Surrey list.

It had been a grey day so far and my mood wasn't much better. It was made worse when I looked at Twitter again. The Ring Ouzel reappeared about 30 minutes after I left. I couldn't believe it – well, I could actually, but just didn't want to. It convinced me there must be a god – it's just that he hates me most of the time.

It was then when I became very childish. I think this is an issue I need to address quickly if I don't want to appear even more pathetic than I really am. I'm 53 this year, for god's sake!

I mentally started throwing the dollies out of the pram.

I made the decision that I was going to have a sabbatical from birding for a while. Maybe a month, maybe two. Why not a year? I was getting totally cheesed off with feeling disappointment more than I felt elation. For some reason I was really struggling to deal with this dip.

I'm not sure why my emotions were more extreme this time more than others, but whatever the reason, I felt loathsome, utterly miserable, dejected, defeated, distraught.

It took me most of the day to get over it, and it wasn't long before the sabbatical was only going to last less than a day and I was going back out in the field to fight another day.

Which brings us up-to-date and Easter Monday. The Ring Ouzel had been reported as seen again in the morning, feeding on the anthills, north of the River Colne. and the Cuckoo was back. The weather forecast was dire. Heavy rain and strong winds. It wasn't too bad early on, but by the time I was heading for Staines again, the wind and rain had got heavier.

I parked at the southern end of the Moor this time for a change – and was soon walking up through the middle of it in a stiff breeze.

The rain came and went as I walked onto the bridge over the river at the 'Brown Shrike' end. I was joined by another birder and we went on a search for a black bird with a white bib on its chest.

Within 30 minutes we had our first fleeting glimpse of the male Ring Ouzel (121) as it flew low and fast before landing in a small tree. Flying ahead of it was the Cuckoo (122), which landed on a tree further ahead. We walked closer and managed to have eye contact with the Ring Ouzel as it flew back the way it came and dived deep into a large bush.

And there it stayed, out of sight. This is the challenge of watching Ring Ouzels. You only have to so much as look at one and it will be off, flying as far away as possible from you. They are so wary. They trust nothing.

After a long search I thought that was it for the day. There was still plenty to see, however. A Grey Wagtail landed on the edge of the river, a handsome male, before it flew off. Better still, flying lazily and low across the Moor from the north east, a Red Kite (123) was on the look out for food. A wonderful sight. 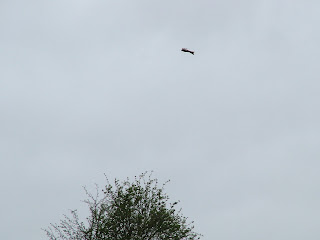 Having stood around in the cold wind and rain, I thought about leaving and returning the next morning when the weather was supposed to be much better. I decided to have one last circuit. I was joined by another birder, Clive, and while walking round I discovered two Red-legged Partridge rummaging in the bushes. A very unusual find for Staines.

The Ring Ouzel didn't show. I walked back across the bridge onto the southern section of the Moor and was just about to start the walk to the car when a black bird flew over my head and landed in a tree in front of me. It was the Ring Ouzel. Another remarkable turn of events, and another that often happens when I'm about to leave somewhere empty-handed.

I whistled Clive over and this time we got much better views of the bird perched up. It was clearly wary of us as we gradually moved closer and closer but it put up with us for quite a few minutes. Clive then left while I stayed on as the light began to fade. 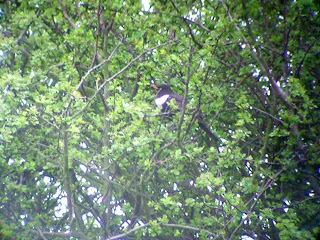 It was about 6.45pm by this stage, but I was savouring the moment. Just me and the male Ring Ouzel sharing the same space for a while. He staring at me and me staring at him. Great stuff. I tried to get a bit closer still, but this time after a brief hesitation he flew low and fast across the Moor and dropped on the deck. I walked around and discovered he was feeding by some anthills again.

The light was terrible, the wind had picked up and the rain was getting heavier. So after a couple of shaky record photos, he flew back up into a tree. I opted to leave him be until the morning when I plan to come back when the sun will be out (we live in hope).

As the wind blew stronger I walked back to the car, but not before watching a couple of Water Pipits beside the river. They looked really striking in their summer plumage – reminiscent of a couple of Wheatears in miniature.

The weather had been grim – I couldn't feel my fingers and my equipment was soaked – but Easter turned out fine in the end.
Posted by Factor at 00:02