I need your help.

I'm pretty sure I saw a Caspian Gull yesterday evening but I can't be certain. There has been one perched on the gantry on the King George VI Reservoir, viewed from Staines Reservoir, for the past few days. I had a few hours in the evening spare, so I had a look for myself.

I know I saw a couple of Yellow-legged Gulls and loads of Common Terns plus a couple of Common Sandpipers during my visit in the fantastic evening sunshine but it is my attempt to nail an id on the Caspo that is frustrating the hell out of me.

The bizarre thing is I'm actually enjoying studying gulls (let's face it, there little else to see at the moment anyway) but admit to being a total and utter novice. I can easily recognise the common species, plus the white-wingers like Iceland, Med and Glaucous, all of which I have seen during the winter months, but the Caspian Gull is a different challenge entirely.

I know that once I have a successful id on one I'll know what to look out for. I've read up on Caspian Gulls via Johnny Allan's blog, a number of books and also the excellent blog Not Quite Scilly by Gavin Haig and his four-part idiots guide to identifying a Caspian Gull, but that mostly focused on the various stages of winter birds. This one is an fully grown summer adult.

So, while the photos below aren't great and won't help that much, they were the best I could muster with crap kit. Are any of these a contender? If not, I'll have another go early on Friday morning.

I hope at least one of these is a candidate. Oh, the sunset was a bit good while I was there. It makes Staines Reservoir appear an almost idyllic place to visit when the sun goes down. Unfortunately, images can be misleading – I just hope the gull photos aren't... 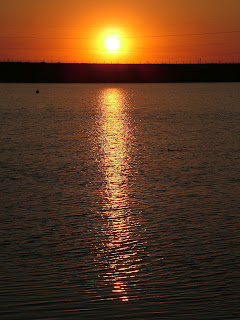 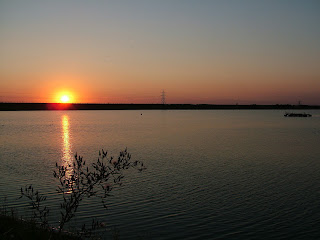 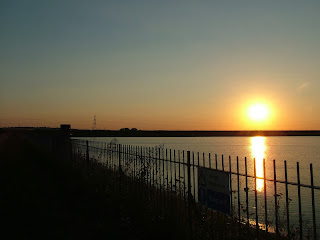