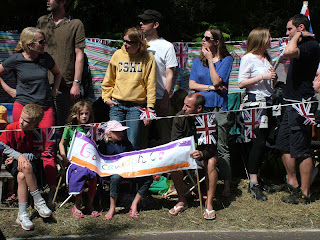 Only 20 minutes up the road, I would normally go to Headley Heath for a spot of birdwatching now and again, but last Saturday morning I travelled up the road for the London 2012 Olympic Men's road race to support Mark Cavendish, Bradley Wiggins and the Team GB cycle team.

I really enjoy the Tour de France, immersing myself in it for the three weeks each year, and it being the Olympic Games and it happening on my doorstep, and also being a huge Cav and Wiggo fan I had to go and watch so I could say I was there when the Olympic Games came by my doorstep.

Although an estimated one million people lined the route, it only took me 20 minutes to get to the end of Dorking Road close to the route. There were signs up saying cars would be towed away if they parked on the verge, but with so many others doing the same thing, I followed suit.

I took the mountain bike off the back of the car and after another 15-minute cycle through the woods I was in amongst the crowds and right next to the road.

The atmosphere was fantastic – really quite moving really – the support for the British team was huge. Even though Cav wouldn't end up with a medal, it was still a thrill to see this parade of British all-time sporting greats.
Posted by Factor at 23:56