BIRTHDAY CELEBRATIONS WITH THE BROTHERS BROWNLEE

It was my birthday yesterday. For the past couple of years I have gone birding, but this time round, with London 2012 capturing my imagination, I opted to go to Hyde Park to watch the men's Triathlon in the hope of witnessing the event favourites, Alistair and Jonny Brownlee, take gold and silver for Team GB.

I got to the park at about 7.30am and found a spot where I could watch all three of the sport's disciplines – a 1,500-metre swim, 43-kilometre cycle ride and a 10-kilometre run to finish off – at the north-east corner of Serpentine Lake.

It turned out to be a day of coincidences and tremendous fun. Despite the fact more than 200,000 people turned up to watch the event, I stood by the railings next to a British Petroleum IT consultant, Oliver from Whyteleafe, who rides out at Redhill Bike Club. A large gathering of Slovakians then arrived, supporting Richard Varga, a friend and training partner to the Brownlees. They were vocal and made the four-hour wait before the 11.30am start pass by quickly with their chants and songs.


Then a young girl and her friend squeezed their way to the railings. Oliver and I gave them room to get to the front as most of the adults behind us were much taller and could see the route pretty well. We got chatting, as you do, and to my amazement I discovered one of the teenagers was a cousin of the Brownlee brothers. 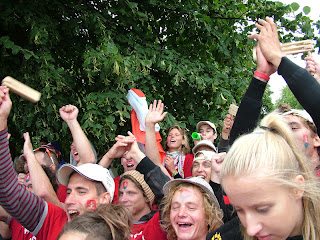 Apparently tickets to the start/finish line were hard to come by, but both Brownlee parents and grandparents had tickets and preferential treatment, so the youngsters had to fend for themselves – which seemed a bit harsh. Kate didn't seem to mind. Apparently, Jonny is the more outgoing of the pair. You had the feeling she wanted him to win but it was Alistair who was the strong favourite to win gold.


As it transpired Alistair did win gold. Jonny, despite a 15-second penalty for a cycling infringement, finished third. Richard Varga, who led the swimming section, finished 22nd.

An amazing morning.
Posted by Factor at 01:24