Birding hasn't been high on the list of my activities of late apart from a visit to Cuckmere Haven at the end of August, where Annie and I were planning to go for a nice walk and have a picnic. The problem was it rained for most of the day, and we only managed to get out for a stroll by 6pm. While out we did see the reported Wryneck fleetingly (for about a second as it flew up from the path and into the bushes where it stayed) and four Whinchat, but little else of note.

While birds can be unpredictable, and twitching can leave you disappointed and somewhat disillusioned when it all goes wrong, nothing could be further from the truth when it comes to the spectacular and uplifting event that has been taking place near Stratford in east London for the past nine days.

By sheer luck, via twitter and the Games Ticket Alert I managed to buy two tickets via the official Paralympics website for the athletics at the Olympic Stadium – one for Monday morning and the other for Thursday evening.

Everything went like clockwork – beautiful weather and an effortless journey to Stratford using the complimentary Travelcard that came with the tickets.

What a way to spend a Monday morning. Even for a 10am start the stadium was full to the rafters and the crowd was so enthusiastic and generous with its applause for all the athletes. Every time a TeamGB competitor even got a sniff of the lead, even in a heat, the crowd went nuts with a sea of flags and a deafening roar. It was a privilege to be there.

The stadium is a truly magnificent structure, which from the outside only reveals the top tier of the grandstands. As you go in, you walk down to the lower tier and only then does the sheer size of the place grab you. I had a row 2 seat along the back straght alongside the long jump. It was 20 quid well spent

Taking centre stage at the south end is the Olympic/Paralympic Flame, the design of which is one of the most beautiful works of modern art I have had the pleasure of seeing in recent years. Truly outstanding.

I came away with a smile on my face, which was welcome considering family illness has been a dominant factor recently.

So that was Monday.

Thursday. Well. What can I say about Thursday night, apart from it being one of the most remarkable sporting events I have ever been to, and I've been to a few.

I splashed out on this ticket. It cost me £30. After I had gone though a number of ticket checks, the lady who checked my ticket before I entered the stadium area itself raised her eyebrows, nodded and gave my a smile. I realised as I made my way to Block 108 that, to my amazement, I had one of the best seats in the house. I was literally sat on the front row, alongside the main straight, and the closest seat right in front of the medal podiums. It was the seat next to where the interviews are done, where the winners come out to receive their medals and where family members and coaches often walk down to and greet the winner during their lap of honour or after they have received their medals. Jonnie Peacock did this after winning his amazing T44 100m gold medal, hugging his sister right next to me. 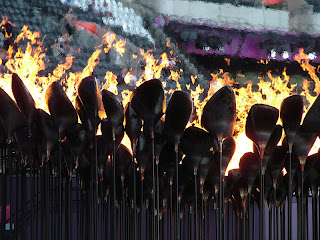 As you can probably guess, it was one incredible night. A night when Team GB won a stack of medals including three golds with Hannah Cockroft winning her second in the T34 200m, David Weir taking his third gold with a brilliant win in the T54 800m and to cap it all Jonnie Peacock taking a world-record breaking gold in the T44 100.

I will never forget it.

If it is birding you want to read about on this blog, you will be pleased to know that, as of Sunday morning, it will be birding all the way and an inevitable Baillon's Crake dip at Rainham Marshes early in the morning. Back to reality with a bump!

Footnote: I wrote this post late on Saturday night before embarking on a trip to Rainham Marshes at first light on Sunday morning. I arrived at the hide at 5.30am, saw a bird through the mist in the half-light at about 6.15am but couldn't really say I saw the Baillon's Crake. It certainly wasn't tickable. I left at 9am and the bird made an appearance at 9.50am. Some things never change...
Posted by Factor at 00:53