STAINES RESERVOIR - AS HARD WORK AS ANY OTHER BIRDING SITE

Having spent a great deal of effort on an eventually successful Baillon's Crake twitch at Rainham, I've focused more attention on birding locally these past few days.

Having said that, I did go back to Rainham in an attempt to see the Sabine's Gull on Monday afternoon, but that turned out to be a disastrous effort. I spent a few hours grappling with a howling gale and torrential rain walking along the path alongside the River Thames, and while I happened to be on site at the right time I was in the wrong place – at the Serin Mound end – when it was seen by Dominic Mitchell and few others (who I discovered later were viewing outside the Rainham Reserve visitor's centre) briefly before disappearing out of sight for the rest of the day and forever more.

Although not my local patch, I visit Staines Reservoir more than any other patch these days. It's not as if I have a great record for seeing stuff there, to be honest. I've dipped a few good birds there just this year – Roseate Tern and White-winged Black Tern being the two stand outs – but I travel back because there is always the potential something will turn up, and with time always at a premium, it is very easy to get to.

I've belted up the M25 three times this week, and with mixed results. On Saturday evening I caught up with Ken Purdey and Rob Innes who pointed me towards a juvenile Garganey (153) that was on the south basin with some Shoveler ducks. On Monday evening I saw three Black-necked Grebes and a Black Tern. 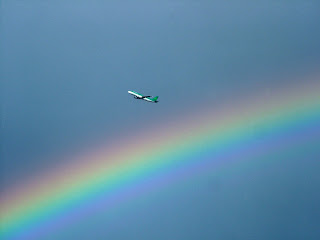 Then yesterday I met up with Ken again and saw nothing at all – lots of rain and a great rainbow but not one bird of any interest apart from one juvenile Common Tern, and then I travelled down to my local patch at Homethorpe on the way home and saw 140 Lapwings, two Egyptian Goose and a Great Spotted Woodpecker as highlights.

Today was another day with changeable weather conditions, but it didn't bring any new birds. No waders at all, which was a pity, but the juvenile Garganey was still present, on the west bank of the north basin and was asleep for most of the time.

We're deep into the autumn migration and Surrey is very quiet. If only Surrey and the Shetland Isles could swap places just for a few days.
Posted by Factor at 23:47