Birdwatching in Surrey is hardcore. By that I mean it's harder work finding decent birds to view compared to many other parts of the country. The Shetland Isles, Scilly Isles, Cornwall, East Yorkshire coast, Norfolk coast, Kent coast and Sussex coast – to name but a few regions – all have an abundance of rare birds to see during the year.

In Surrey, the rarest bird sightings this year has been a fleeting Roller (see by one observer after the bird had dropped into Thursley Common on its way out of Hampshire one morning), a couple of Red-rumped Swallow and a fly-over Red-footed Falcon.

In this land-locked county I live in we get very excited by birds seen regularly on the coast – a wayward Great, Arctic, or far better better, Long-tailed Skua. A Gannet, Kittiwake, Sandwich or Little Tern will get us running to the local patch. A Rock Pipit I saw at Staines Reservoir last week made my day.

So rare treats are hard to come by, and as a result Surrey birders are probably less blasé about even fairly common species than some other county birders.

I say this having read a blog the other day in which a fine Sussex coast blogger who, commenting on the fact a Yellow-browed Warbler and Red-breasted Flycatcher that morning had only showed very briefly to observers present, questioned why it was worth bothering with this pastime on such days!

I can't recall when the last Red-breasted Flycatcher appeared in Surrey but it must be some years ago, and Yellow-broweds only appear a couple of times a year at the very most, so even a tiny glimpse would be gold dust to us! He really should come over the border for a few days birding here to see how the other half live...

The sighting this morning of a female Two-barred Crossbill – perched high on a dead branch of an oak tree on Leith Hill – was, therefore, diamond-studded.

At the end of July, when Two-barred Crossbills were appearing in Yorkshire and Norfolk, a female was seen with a flock of about 150 Crossbills near Redlands Farm, just south of Dorking, on the slopes of Leith Hill in Redlands Forest. I'm not sure who found it, but it wasn't seen again until this week.

This time the Two-barred Crossbill was higher up on Leith Hill next to the Coldharbour Cricket Club pitch. For those who haven't been to the area before and are planning a visit, it's a remarkable spot.

When you drive into the village, it's hard to imagine there being a cricket pitch anywhere amongst the dense woodland and steep slopes. But just past the Plough Inn, forking right off the lane is a track that runs up the hill for 300 yards on to a plateau, where the cricket pitch sits nearly 900ft up, surrounded by National Trust woodland, with a great view across the Weald towards the Sussex coast. It is here, just behind the pavilion, where there is a small pool the Crossbills come to drink at most mornings. The birds fly over in small groups and land in the trees nearby, favouring a couple of oak trees and an adjacent pine, before dropping down to the pool.

After a brief recce yesterday afternoon, I arrived at sunrise this morning, and met local warden Sam Bayley. Not long after Dave Harris arrived, as well as 'Captain' Bob Warden, Gerry Hinchon and Graham Osborne. The wind had picked up and it was bitingly cold. 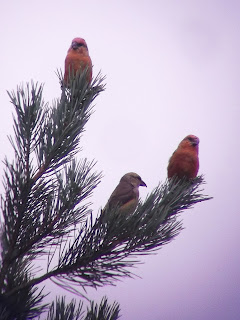 We set up scopes and binoculars for what was basically a birding stake-out. A case of waiting, watching and hoping. Plenty of Crossbills came and went in groups of six to ten, as did the odd Siskin. A few Redwing flew over, as did a Sparrowhawk.

It took two hours, with fingers numb from the cold, before a promising group of more than 20 Crossbills arrived from the south-east and flew into one of the oak trees, conveniently the one with dead branches poking out the top of it.

Gerry was the first to spot it – having watched a potential candidate for a couple of minutes – as it perched higher up on a dead branch. Bingo! The female Two-barred Crossbill showed really well for about a minute before flying off east with the flock. 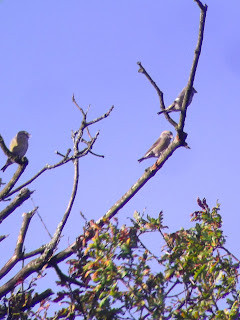 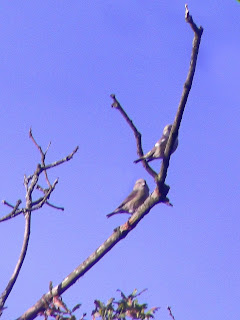 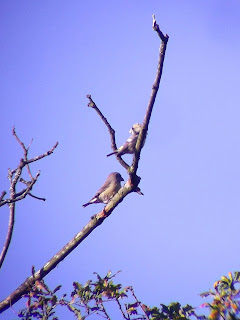 This was a Surrey first for each of us present, a proper rarity to enjoy, and after much back-slapping and hand-shaking we suddenly forgot how cold we were.

The Leith Hill area is underwatched, probably because it covers a vast area, but its potential is obvious. During the past couple of days up to five Ring Ouzel fed on Rowan berries nearby (none today) and a Grasshopper Warbler was trapped.

Wood Warbler have bred here in the past (unfortunately not this year) as do Woodlark. During the winter numerous Mealy Redpoll get caught in the nets, as are Brambling.

The Two-barred Crossbill, meanwhile, has been present in the area since the end of July. Hopefully, it will stay long enough for more people to enjoy during the coming weeks.
Posted by Factor at 14:18