BOOTING IT IN THE HOPE OF A BOOTED WARBLER

I'd been debating whether to go to Cliffe Pools to see the Lesser Yellowlegs yesterday (looked like a tricky twitch) when a Booted Warbler popped up on Rare Bird Alert in the morning. It was seen at Hope Gap near Seaford and while it was a working week it was still just about possible to twitch after my wife Annie's 4pm hospital appointment in Guildford.

Let me digress for a moment. Having developed asthma virtually from nowhere about 18 months ago, Annie has been wading through what is the NHS behemoth in the hope to finding a medication or treatment to control it. This is particularly important considering some of her work is as a voice-over and this condition has changed her voice. Not good.

While the concept behind the NHS is wonderful, in practice it can be an utter nightmare. To say it can run at a snail's pace at times is an understatement, particularly with an ailment or condition that, while not life-threatening, can cause a great deal of discomfort and make you feel downright miserable.

Cancelled appointments have been commonplace, with gaps in between of more than a couple of months. These have been due to secretaries on holiday, consultants away or on vacation, or moving from one placement to another hospital. While you're at it add a few cock-ups in between. There has, therefore, been little continuity.

The one area that has been very good has been the speech therapy department which has helped Annie change the way she breathes. The asthma had caused her to breath higher up her airways but now she has developed a method of breathing that uses her diaphragm more. All interesting stuff, and it has helped, but in truth 18 months on she is no closer to a treatment to make her more comfortable.

So when I suggested we should drive for an hour and a half to Seaford, she was surprisingly up for it, the incentive being some sea air.

It was going to be tight though. By the time we got through the rush-hour traffic, learner drivers and tractors the light was starting to fade. Hope Gap is a fabulous spot on the Sussex coastline. It dips into a U-shape valley where there are numerous bushes and shrubs ideal for migrants on the move to feed and to rest. There is also a car park at the end of Chyngton Lane at South Hill Barn just to the north which takes the effort out of walking along the cliffs to get to it.

We parked up just after 6pm and walked down the pathway where we could see a group of birders peering into bushes. One of them, predictably, was David Campbell, aka Devilbirder, twitching the Booted Warbler after his first day at Brighton University.

We were lucky because the bird had disappeared from view for a few hours during the afternoon but was ready for an early evening feeding session and had become active again. Within a few minutes the Booted Warbler appeared on some brambles in front of us. It was quite close, easy to see even with the naked eye, and very active. A smart individual, it would perch up clearly visible and showing well for a few seconds before dropping out of sight again. It flew around the area for the next 20 minutes as the light dropped appreciably. My photos were hopeless in the low light so David generously allowed me to use a couple of his from the evening. 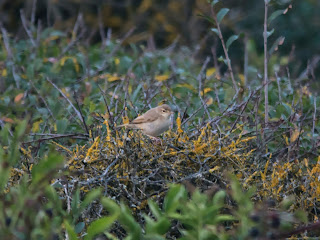 When it then few low across the bushes and dived into the undergrowth it was clear that was going to be it for the evening but we had seen this rarity for a good few minutes.

We had an enjoyable walk back to the car with David, catching up with news and general birding gossip before setting off back home via an excellent fish and chip shop in Seaford.

I was planning to pay Hope Gap another visit today if the Warbler had stayed for another 12 hours but, as was always likely, it had gone by morning.

Instead I spent the afternoon in Surrey and travelled to Staines Reservoir for the first time in at least a couple of months. Target bird here was a Rock Pipit, first found by Bob Warden a couple of days earlier, but not seen today. Rock Pipits have been on the move in numbers this past week and seeing as this is a coastal bird, an inland sighting is as good as a rarity.

There were plenty of Wigeon on the north basin and Pied Wagtail on the causeway. A few Meadow Pipit flew overhead but there was one Pipit that caught my eye. Luck struck again as I caught sight of the Rock Pipit. Much darker than the Meadow Pipits it preferred to hang around the banking of the causeway on the north basin and stopped at one point for a wash. A great Surrey tick! In some ways I was more pleased to have found this relatively common bird than twitching the Booted Warbler, mostly because I'd found it my own. 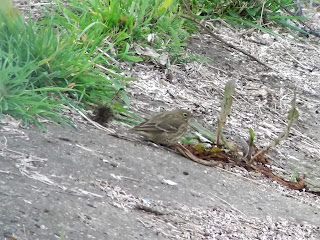 From Staines I set off for Tice's Meadow to twitch a Little Stint that had been present since the weekend. Tice's top birder Dave Baker tweeted me to confirm it was still on the patch. I arrived at 5pm and met up with Dave, who had just arrived, and he promptly relocated the Little Stint. The light was too low, the bird too small and distant to be worth taking a digiphoto of it but it was an excellent second Surrey rarity of the afternoon. A Dunlin was another decent wader sighting.

We were soon joined by patch lieutenant Rich Horton and Rich Sergeant, who'd dipped it yesterday, and after plenty of birding banter I headed off home.
Posted by Factor at 23:54