ROUGH-LEGGED BUZZARD PUTS ON A SHOW AT JEVINGTON

There has been an influx of Rough-legged Buzzards cruising into the country this autumn, with the majority sticking to the north-east coast, and East Anglia.

There have, however, been two notable Rough-legged Buzzards in the south and south east – both juveniles – one in Hertfordshire and the other more recently in East Sussex. The Hertfordshire individual at near Braughing at Hay Lane, has been resident for a couple of weeks now and has been giving birders top-notch views every day, while the other one just south of Jevington, near Eastbourne, only appeared on Sunday.

With mid-week mornings the only opportunity to pay a visit to see either, I opted for the Sussex bird. It was going to be a darn sight easier heading south than being stuck in rush-hour traffic heading north all the way round the M25 – and so it proved this morning. The traffic reports were horrendous with accidents at Reigate Hill and Wisley. It would have taken me hours to get there.

The trip to Jevington took 70 minutes, which was just fine by me. And as soon as I drove by the area I spotted the Rough-legged Buzzard immediately drifting high above the game crop in the field it favoured by the side of the road.

Sighting don't come much quicker than that – I hadn't even got out of the car.  By the time I parked and gather my scope and bins it had drifted off over the hill, keenly pursued by Carrion Crows, a Kestrel and a couple of Magpies.

Already in situ were Gareth and Roy Hughes, and then about 15 minutes later Bernie Forbes arrived with Owen Mitchell (a rare sighting away from Selsey Bill), Dave Sadler and Dorian Mason. A good gang. 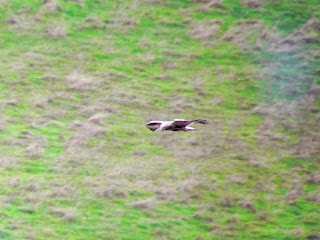 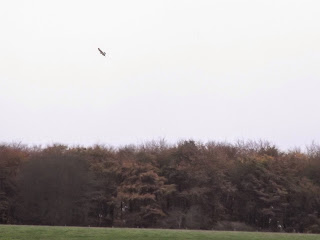 We didn't have to wait long the the Rough-legged Buzzard to return. He was soon hovering in the wind looking for potential prey and gave outstanding views. Eventually he spotted something and an unfortunate vole was caught in his talons and was soon carried away to be eaten. 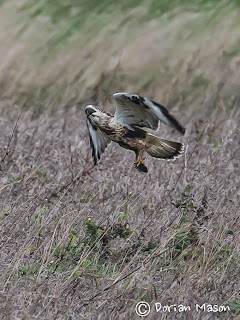 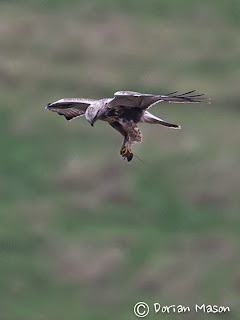 The light wasn't great so as a result my digiscope images were truly awful, but Dorian Mason agreed to let me use a couple of his excellent photos taken this morning.

So, for once, I made the right choice. And I didn't try and over-egg the morning by going to Beddington to see the Grey Phalarope, even though by doing so I've risked missing it in the coming days.
Posted by Factor at 18:51