A LESSER YELLOWLEGS, NO LESS

OK, so this isn't the Randon's Ramblings Awards – they'll be coming up next. I had just one more opportunity this year to go out birding so I headed off this morning to Pett Levels in East Sussex to see the Lesser Yellowlegs.

The plan had been to hopefully get the Yellowlegs in the bag before driving down the coast to pick up the Rough-legged Buzzard at Jevington for a second time on the way home.

But making plans and birding don't always go to hand-in-hand. In fact, planning anything around birds is really a bit foolhardy. I arrived just after 9.30am on a beautiful crisp morning, basked in ultra-bright sunshine, to discover the American wader was still about. However, a photographer had turned up about 20 minutes before I arrived and had parked close by the road and slammed the boot of his car, causing the bird to fly off and dive down behind a bank, and it hadn't reappeared.

I pitched up on the sea wall, where I met up with a few other local birders. While it was a beautiful morning, it was bloody cold, and the wind began to pick up a tad.

About 30 minutes in, a Marsh Harrier coasted over the area, causing the Wigeon and other ducks to take to the air, including four Redshank-type waders.

It was looking like a bit of a wait, but while I stood there, gradually freezing to the spot, a couple of Bewick's Swan flew over the Pools, heading towards Dungeness.

But still no sign of the Lesser Yellowlegs. An Avocet pitched up on the edge of the water in the distance, where I saw a Redshank and one other wader, but I couldn't make out yellow legs, and as no-one else seemed that interested, I thought no more of it.

A bit later I was joined, out of the blue, by Roy 'Bulldog' Dennis from Beddington. It was really good to catch up with him. Soon after a few other birders arrived along the beach from the east and they revealed the Yellowlegs was actually in the fields to the east feeding along with some Lapwing.

Off we dashed a few hundred yards up the road, only for the bird to fly back the way we came. Off back to the Pools we went.

Eventually, in the distance, some 300 metres away on the edge of the water, scurrying around behind some sleeping Wigeon, was the Lesser Yellowlegs. Hurrah. It was in a similar spot to where I had seen the unidentified wader ealier, and  I'm certain it was the same bird. 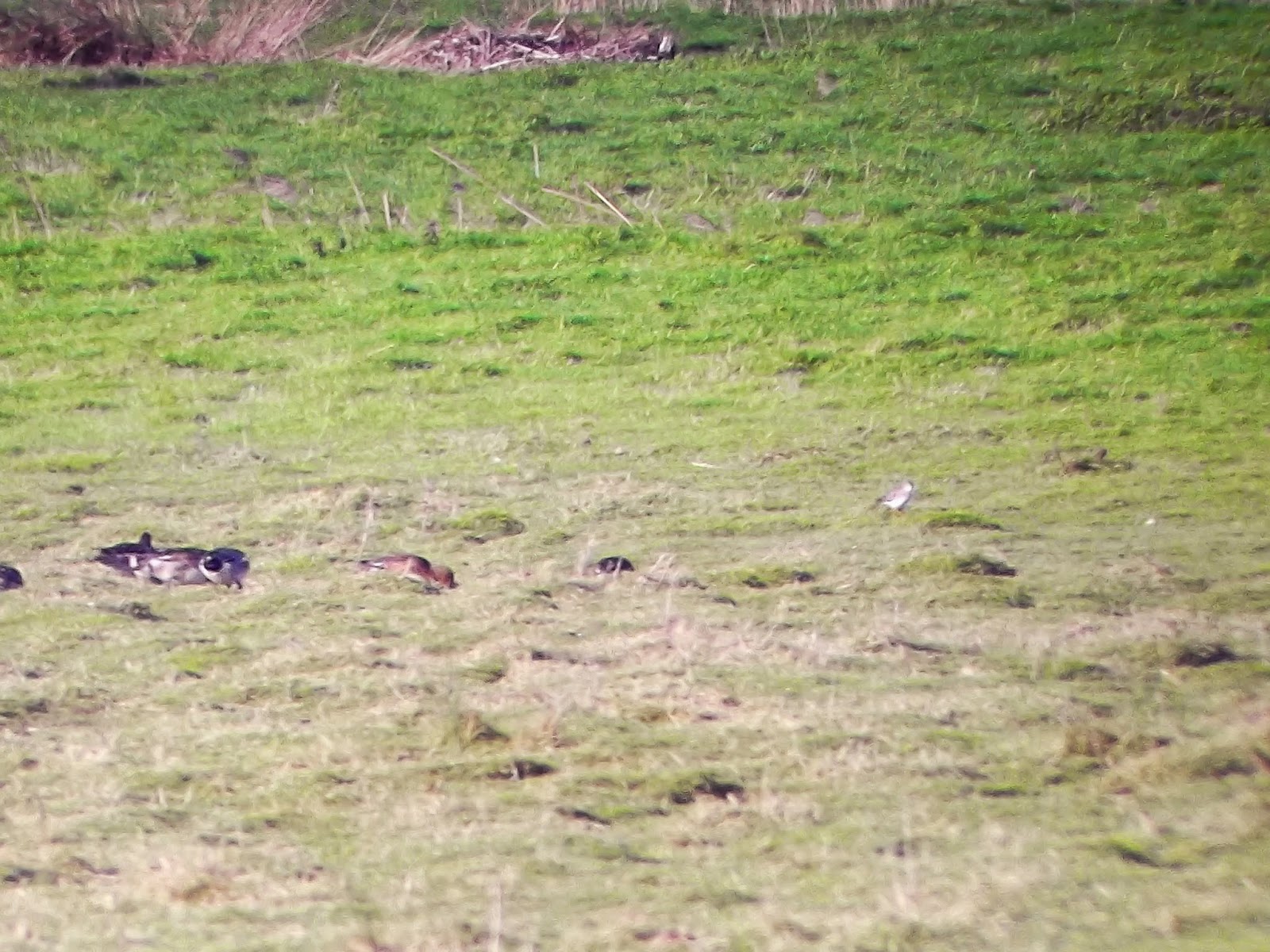 We watched the Lesser Yellowlegs wander this way and that for half an hour until it decided to fly back to the fields.

Most of those around me decided that was enough. I stayed for another hour, spending much of it thawing out in the car, apart from when the Lesser Yellowlegs flew back to its favoured distant spot by the water's edge for another rummage. Its cravings for the field area then got the better of it and it flew back to the field, dropping down out of sight.