THERIN LIE A PAIR OF SERIN

Four days after the Iceland Gull conundrum I headed off east to Essex. The task was to see a couple of male Serin at Shoeburyness, to the east of Southend, present since January 31.

I like Serin. I saw quite a few in Spain last September – they're attractive little finches – and with little else to go for that day apart from the Surf Scoter further up the coast – but that was a tad too far to travel to make it an enjoyable day out – a nice little trip to the seaside sounded appealing.

It was a pleasant day, too, with plenty of sunshine to add a touch of warmth to the air.

When I arrived at Gunners Park, there were plenty of walkers around, and people generally enjoying the sunny morning.

Out on the beach, where the tide had gone out, six Brent Geese were feeding, as well as a few Curlew, Redshank and Oystercatcher. There were also birders aplenty milling about, and I was told by one of them the Serin had been seen earlier that morning – I didn't arrive until gone 9.30am – but they had flown a few 100 yards away into some scrub.

Rather than chasing around the place I went to an area which I was also told was one of their favourite spots by a small lake and waited.

While I stood around a very tame Stonechat skipped around the area and then the word went out the Serin were further along the park close to some tennis courts.

A group of us marched up to the spot, but the birds had either dropped down on to the ground and were feeding or had flown somewhere else. After about 20 minutes I meandered back to the original spot I started from.

Then low and behold, the word went out again they had re-emerged in bushes by the tennis courts. Off we trudged again.

This time I wasn't to be disappointed. There were the two Serin, close to one another in the bushes, showing quite well. Lovely birds, and everyone present got to see them.

And then, suddenly, they were off. They flew overhead towards the sea and across Mess Road above some housing and then dropped out of sight.

Everyone seemed to be happy with the views they'd had but walking back with a birder who had come down from Norfolk, I suggested we have look behind the housing to see if we could get a view of them from the seafront. It hadn't looked as if they had gone that far.

So we walked around the back. 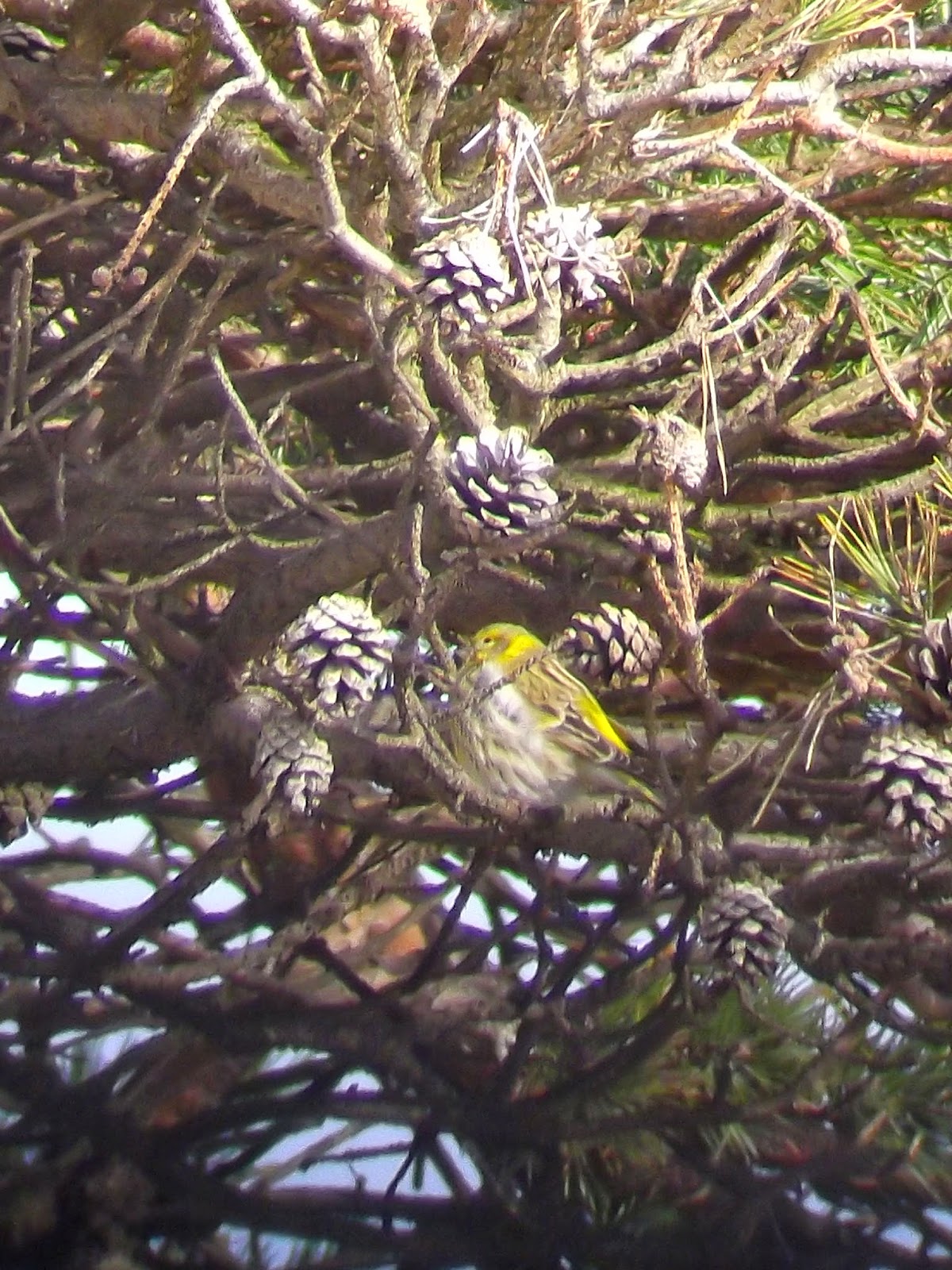 It was a bit of an obstacle course with boulders and a few raised platforms but my Norfolk colleague clambered up on a bank towards a pair of lone pine trees and struck gold. The two Serin were in the trees, and were showing nicely. We watched for a few minutes as a couple of other birders joined us before the two birds took flight again, but this time they circled around us and then dropped down on to some grassy vegetation a few feet away.

Here they stayed for a good 15 minutes and so we were able to enjoy watching these smart finches happily feed without being disturbed. Good stuff.

Once the 15 minutes were up they took off again and they flew back over the housing and towards the tennis court area again.

I liked this site, and it is no surprise it acts as a magnet for migrants during the spring and autumn with the variety of habitat it contains. And seeing as it isn't too difficult to get to, I won't be surprised if I end up going back again some time this year.
Posted by Factor at 09:33