It had still been pretty quiet this week until, inevitably, I happened to be away all day yesterday. A drake Garganey was seen, asleep, first thing in the morning on the pools at the Moors.

Luckily, it stayed all day and was still about when I dashed over to Holmethorpe just before the light had gone at 8.20pm. I managed to get pretty decent views of the Garganey, it was now quite active, feeding and swimming around, even taking a brief flutter into the air to keep out of the way of some aggressive Coots.

I went out this morning to see if it was still around but it had gone. Garganey are a relatively regular visitor to the site, we have had at least one sighting for the past few years. This drake was a welcome addition to the patch year list, bringing the total up to 113 for the year – well down on 2016, when we had seen 127 species by April 29.

I've been keeping an eye on the weather and it turned to a breezy south-easterly today, which was good for seawatchers and likely Pomarine Skua movement. And so it proved, with decent numbers passing through the English Channel for Sussex and Kent birders to witness.

I'd made a late start to the morning on the patch,but I couldn't resist the urge to belt down to Splash Point at Seaford to see some migrating Skuas for myself.

Predictably, a large throng of birders were already set up at the Point and I managed to position myself close to Simon Linington, a director of Sussex Wildlife Trust and a top-notch birder, who kept many up-to-date with birds as they flew passed.

It had already been busy morning, but fortunately there was plenty still going on, and it wasn't long before my first Bonxie flew east, followed by my first Pomarine Skua of the spring. 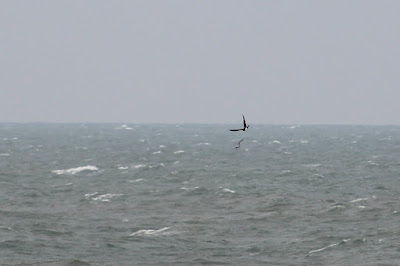 The stream of birds was constant for the two hours I was there (10.15am-12.15am), with a number of Arctic Skua being added to the list.

Altogether I saw 10 Pomarine Skua, including five together, plus great views of an Arctic Skua pursuing a Sandwich Tern – of which there were numerous. Added to which were Common and 'Commic' Tern, plus at least 10 Little Tern.

On the wader front there were decent numbers of Whimbrel, Bar-tailed Godwit and Knot, plus the odd Grey Plover, Sanderling, Dunlin and Turnstone.

The weather looks less encouraging tomorrow, more south than south east, but being a day off, I'll be heading to Seaford again early in the morning.
Posted by Factor at 22:32