The summer went by in a flash – as it invariably does – and we're now already deep into the autumn and rare migrants/vagrants are dropping in all over Britain.

Writing blogs hasn't been high on my agenda, as I hadn't been birding much, or at all, now that I'm fully-employed once again (for the first time in 20 years – and it feels a bit odd). I hadn't even walked the local patch at anytime during the summer, which was a first, let alone ventured further afield.

But from a personal level August, in particular, had been a memorable month.

A three-day trip to northern France to celebrate(!) my 60th birthday, was followed by four days in Cornwall, including a day trip to the Scilly Isles, and concluded at the end of the month with a week in Mallorca.

Much of this time off was spent birding, and while the sightings never hit the heights of recent weeks across the country – I seemed to arrive at most places a week too early – I enjoyed it all very much.

As so, from the top, northern France. To cut a long story short, Annie and I went back to the La Grenouillere, where we stayed for our 25th wedding anniversary two years ago (see here). The two-star Michelin restaurant run by the brilliant Alexander Gautier, produced food even more memorable than our previous visit. A very relaxing way to reflect on 60 years on this currently locally perplexing planet of ours.


Coincidentally, we stayed in the same cabin as we did then, and even sat at the same table for our 11-course tasting menu. All good stuff – and the gin and wine were top notch.

In between our extraordinary culinary experience, I managed to go for a walk around the area below the town of Montreuil-sure-Mer, along the River Canche each morning. And while I was looking for (and failing to find) Golden Oriole, I did manage to discover Short-toed Treecreeper, a Turtle Dove and a few Willow Tit, the later showing really well but not long enough for a photo. 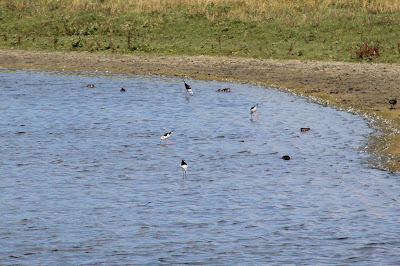 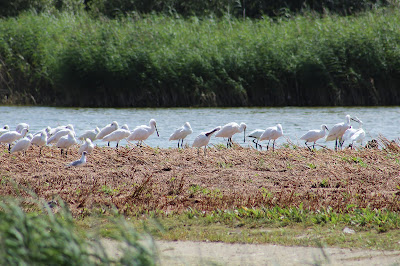 On my actual birthday, we went to e Parc du Marquenterre, where the usual suspects were present, numerous Spoonbill, Black-winged Stilt, Cattle Egret and a Great White Egret, but the highlight of the day was a Hen Harrier that flew through one of the scrapes.

A week and half later and I was heading down the A303 to Penzance, where I stayed for three nights.

I hadn't been to this part Cornwall since I was a five-year-old, so both Pendeen and Porthgwarra were sites I was keen to visit. Seawatching was high on the agenda, as was the hope of seeing a few large shearwaters.

But while 12 months earlier, Cory's and Great Shearwaters were seen in abundance, it was notable how few sightings of either there had been leading up to that week. And during my four days, none at all. 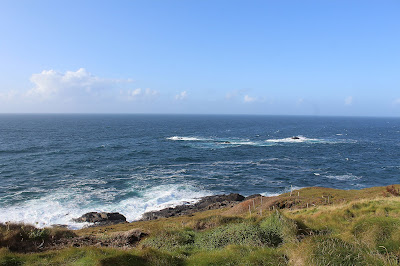 Pendeen (two mornings and an afternoon) offered only an handful of Sooty Shearwaters. But the highlight here was actually the huge numbers of Manx Shearwater seen one morning – in their thousands – more than I have ever seen in my life. Streams of them scythed passed this spectacular coastal birding point, probably in the region of 10,000 during the day. A couple of Balearic Shearwater went through, but sadly I couldn't pick them up in the scope.

Other than that, along with the ubiquitous Gannet, the odd Fulmar, I saw a couple of Arctic Skua and two Bonxies. Closer up a pair of Chough were entertaining, as was a solitary Wheatear. 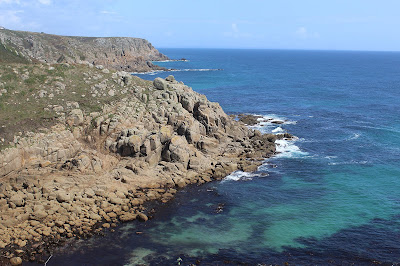 I went to Porthgwarra on my second afternoon but all was very quiet with hardly a breeze, but it was still enjoyable to visit this site. I think Pendeen is my favourite out of the two, if only because there's ample protection from the wind around the lighthouse there.

The highlight here was the sighting of a Risso's Dolphin, just as the boat entered the Atlantic waters away from Land's End and the Channel.

Again not much on the bird front – yet more Manx Shearwaters, and a couple more Bonxies on the journey to St Mary's and back, and on the Isles, I had a walk around the main island locally from Hugh Town, and managed a couple of Wheatear. Again, I wasn't that disappointed, as the weather wasn't really favourable for anything memorable to appear. But I intend to return for a longer visit next year during September, including a boat trip out to see hopefully some Wilson's Petrels and large shearwaters.

My final morning was spent on the Francis Joyon-designed sailing catamaran, Shearwater II, skippered and owned by Duncan Jones of Marine Discovery. It was another throughly enjoyable morning, sailing 10 miles out from Penzance.

Plenty of Common Dolphin swan alongside and under the boat, including a mother and calf together. Plus plenty of Harbour Porpoise were seen and later Grey Seal on the rocks close to the harbour. Bird-wise, it was relatively quiet, with more Manx Shearwater, along with plenty of Gannet, the odd Fulmar, a couple of Guillemot close-up, Shag and a lone Kittiwake.

I've discovered I love heading out to sea, so will plan more trips doing the same next year.