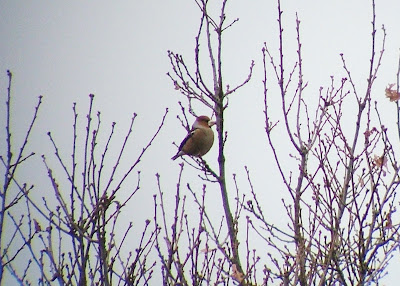 I had very bad day at the birding office on Friday. Five hours were filled with seeing absolutely nothing of any note at Thursley Common, Crooksbury Common and then Bookham Common.

I managed expertly to dip the Hawfinch at Bookham, having waited for an hour alongside Kevin 'Kojak' Guest. I then reluctantly made my way home only to have Kojak text me five minutes later to let me know a Hawfinch had landed in a nearby tree. I turned the car round and went back, only to stay for another hour and draw another blank.

I made a return visit to Bookham yesterday morning. What a difference a day makes. I was joined by another birder, Tim, a solicitor from Teddington, and within minutes of arriving at the train station car park, walked over the footbridge and waded through the mud on to the Common, we were both looking at a Hawfinch perched high in a tree to the back of the train station.

During the next couple of hours the Hawfinch flew from tree to tree, over our heads and generally stuck around for us to get some great views of it. As an added bonus to the visit, another Hawfinch arrived on the scene late on. A few Bullfinch and Siskin were also present, so it proved to be a morning well spent. 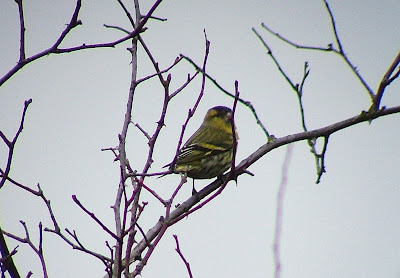 On the journey home I got a text describing a private site where a female Eider had landed. The site was on private land so it was difficult to get a proper view. As it turned out, I couldn't get a decent view of anything - if the Eider was there I could only imagine it.

I'll try again at some point, but after a quiet couple of weeks on the work front, it has come back with a vengeance and any trips will be local and brief during the next seven days.

The local Waxwings are still present, with numbers varying between 10 and 30, although they don't stay for very long on Frenches Road before flying off to a new feeding station somewhere north of Merstham.
Posted by Factor at 14:39