I thought it would be straightforward to begin the new year on a good note. Having been to Cranleigh yesterday to get some fantastic views of 27 Waxwings, I went back to the Methodist Church with Annie to take another look this afternoon.

The birds had previously been frantically gulping down berries on two small shrubs on the pavement right next to the church, and I was hopeful of some more close-up shots to go with the photos below. 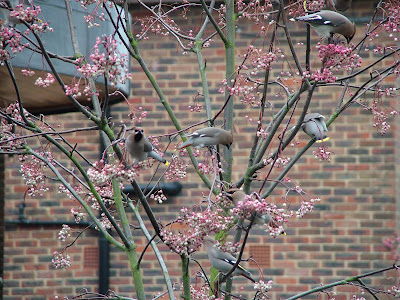 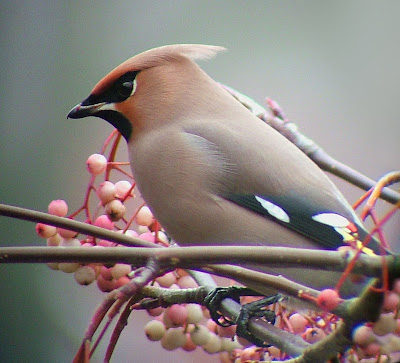 Cranleigh is a odd place to get to as it takes seemingly forever if you're heading cross-country from Redhill. And once you arrive, everyone drives around in first gear and at a snail's pace - which doesn't suit me at all. For some reason, every man and his dog wants to go to Cranleigh, so the traffic backs up down the high street, no matter what time you arrive.

It wasn't so bad today, apart from the constant drizzle - and the fact the birds had gone. So, we went home.

A wasted round trip of two hours perhaps, but sods law dictates that 21 Waxwings would turn up in a tree on Frenches Road, 50 yards from my front door when I got back. These birds had discovered an apple tree at the back of a house just down the road, and were having a gluttonous time scoffing half-rotten Bramleys. 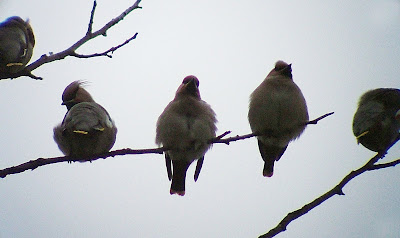 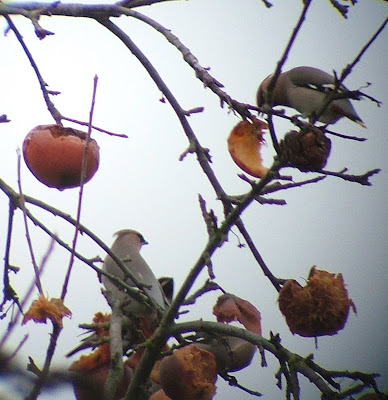 Annie couldn't believe it (but then she doesn't come out with me on these jaunts very often - if she did she would realise that this is a common occurrence), but at least I could tick off my first decent Surrey bird of 2011 on January 1. It was also a top bird for a new list, my house list, which is based on an area within 500 metres of my gaff. A bit of an urban list this one. It also means I can gain some enjoyment from seeing birds without leaving the confines of the property - escaping Randon Towers has been a problem in the past, because I work from home. But now I don't have to worry so much. Clever, eh!

So, Waxwing is done already, as is Little Owl (seen over at Mercer's Farm in the very late afternoon), Ring-necked Parakeet (we have about 300 that roost in the trees down the road from us), plus a few easy ones, although I haven't really got started yet.

The plan this year isn't actually to go listing, as I don't think my wife's patience can take it, and also I'm not sure I can force myself to go for it again at the moment - after all, when does it all end? You could go on forever, and I'd most likely turn into a bitter and twisted old git who went round constantly talking to himself (pretty much me in a nutshell, actually). What I will be doing this year, however, is drawing birds. Once I have a few decent illustrations down on paper, I will post them up on the site to see what people think.
Posted by Factor at 16:52