It has been a fascinating week, but not on the birding front. After the shocking revelations about phone-hacking by the red-topped Sunday rag, the News of the World, the story exploded on all media fronts, particularly on the internet. Once the thorn in the side of celebrities and politicians for its 'caught-with-their-trousers-down' exclusives, it was now the newspaper itself that was the centre of controversy.

After a remarkable three days, the paper was axed by News international, the British newspaper publishing arm of Rupert Murdoch's business empire, News Corporation, fronted by Murdoch's son, James. The two aspects of the story that angered the majority of observers, including myself, was that the newspaper was folded so abruptly that more than 200 journalists and newspaper workers lost their jobs at a stroke because of the reckless acts of the previous employees at the newspaper more than five years ago, and secondly, that the flame-haired CEO of News International, and the editor of the paper at the time of the revelations, Rebekah Brooks, was still in a job despite calls on all sides for her to resign.

The revelation I personally discovered was the power of Twitter as a forum for up-to-the-minute news feed. Almost every minute new information was coming through via the News of the World offices - until their internet access was blocked by their employer - and a vast number of updates and comments were feeding through from political journalists, politicians, celebrities, the general public.

It was captivating stuff until a message came through on my phone from Johnny Allan at 5.51pm - 'Red-rumped Swallow Unstead SF now'. A Red-rumped Swallow? The bad weather must have blown it our way. This I couldn't miss. My bad back was on the mend, so I was soon belting down the A25, heading for Godalming. I've never seen a Red-rumped Swallow before, let alone one in Surrey. Apparently later, I discovered from Johnny that it was only the fourth-ever record of one in the county (make that the fifth ever - see comments below). 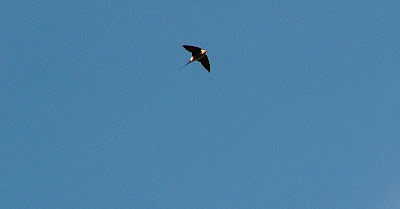 I got to Unstead in 40 minutes, and Johnny was already in position, alongside Brian Milton, the guy who discovered the bird. It was a major coup for Brian, who is nearing a remarkable landmark. He is fast approaching 3,500 days of continuous Unstead patch watching - that's nearly 10 years without a day off! It takes all sorts.

The Swallow had just flown close by as I arrived, in amongst a large flock of feeding House Martins and the odd Swift. It took an age to lock on to the bird but eventually I got my first glimpse of the Red-rumped Swallow (148). 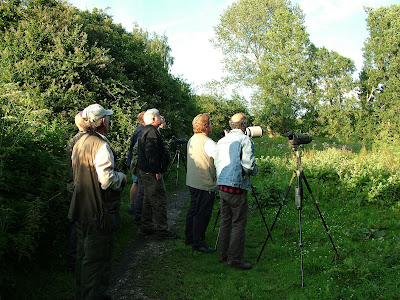 A number of other birders soon arrived including 'Devil Birder' David Campbell and Ian 'Eagle' Jones, then later others, including Bob Warden and Franko Maroevic. The Swallow favoured an area close to a clump of trees next to the sewage works, so we moved further along a footpath to get a better view. It wasn't too long before the Red-rumped Swallow was flying close by, even over our heads - it was showing really well.

It had been more than two weeks without a trip out for a spot of birding, so this extremely rare Surrey bird was a fantastic way to get back into it.