NOTHING TO REPORT, APART FROM A RED KITE...

The above headline says it all. It's been a nearly three weeks since my last post and if it wasn't for an urge just to write something, it would probably have been another week or more before I bothered to tap away on the keyboard.

So, what's been happening? A lot of thinking but no birding, that's what. After the satisfaction of catching the Red-rumped Swallow at Unstead at the beginning of the month, there have been scant reasons to step outside the door ever since. For one thing the weather has been ordinary, to put it mildly. Despite torrential rain on occasions, plus a typically brisk wind every day and low temperatures - a typical British summer's day - there have been few good birds dropping in anywhere to warrant me dropping everything to go and see them. The majority of good/interesting sightings have opted to stick to the coast.

It's the predictable problem of living in a land-locked county. We in Surrey get excited by birds other county watchers wouldn't even bother raising their bins to. Black-tailed Godwits, Ringed Plovers, Turnstones, Sanderlings. I've seen all of these in Kent this year - they're standard fare anywhere along the coastline of south-east England. You don't have to look hard to see one. Gold dust, however, in Surrey - wader and Surrey is an unusual juxtaposition in the general scheme of birding things. They aren't rare birds per se, but unless they drop in at Holmethorpe, I find it hard to raise the enthusiasm to traipse off to another Surrey site just to say I've seen one.

There have been a few five-star birds at other sites, notably the Black Kite over Beddington found by Johnny Allan a couple of weeks back - what a fantastic bird to discover cruising over your patch! Alas, no such luck at Holmethorpe. It has been a rather barren eight to ten weeks or so. Despite this bleak summer outlook, there have been more bird species seen at Holmethorpe so far this year than in 2010. And we know, by the law of averages, a real stonker could turn up at anytime.

We know that to be true, but it all takes time and effort. Holmethorpe has a number of dedicated patch watchers doing the rounds, but even they have been absent on a number of days this past couple of months. There's only so much repetition and disappointment a human being can take in one go! What's happened to all the birds - have the Maltese shot them all? 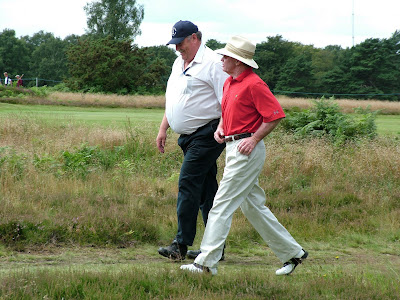 I did see a Red Kite on Walton Heath golf course last week, but it was a golfer called Tom Kite, wearing a red shirt. That's as close as I got to seeing a decent birdie in Surrey recently (terrible puns, but I couldn't resist it). Red Kite was kept company by the Greater-breasted Course Official. An impressive defiance of the laws of gravity by anyone's standards...

My main task in the coming weeks, apart from catching up with the above birds I haven't seen in Surrey this year, which also include a number of other elusive species - Spotted Flycatcher, Firecrest, Tree Sparrow (a Beddington gimmee), Yellow-legged Gull (another a Beddington gimmee) and Wood Sandpiper - is to put pencil to paper for the first time in more than a year. I intend to put together a few drawings and perhaps a painting for the Birdwatch magazine art competition. I've got about six weeks to get my act together and execute the images I've worked out in my head. If they work out OK, I'll enter them. If they aren't what I think are good enough, they'll be kept under lock and key. I'll keep you posted.
Posted by Factor at 22:38