WHINCHAT ON THE FARM

No sooner had I moaned about the lack of interesting birds in the area during the past couple of months when one decided to drop in.

Work was quiet, so seeing as it was a pleasant day I took Annie out for lunch at the Gomshall Mill. The Mill is one of only a handful pubs we go to these days where the food is actually worth eating. Too often at other places we've ended up having a crap meal, feeling decidedly ripped off.

The other pub we really like is The Sportsman, near Tadworth. The Sportsman is, in my view, probably the best pub for both food and beer within a five-mile radius of where we live. Both are excellent and reasonably priced. Worth a visit, and after lunch you can walk on Banstead Common, which is right next to the pub.

After the Mill, we went to Holmbury Hill for a brief walk and a chance to take in some sunshine. It was here I caught up with Twitter on my mobile and noticed that David Campbell had a female Whinchat and juvenile Stonechat at Canons Farm. I haven't seen a Whinchat since last autumn, so when we got home later I got my kit and went for a look. As far as David was concerned neither looked like they were going anywhere, so I was reasonably confident they would still be there when I arrived.

And so it proved. I got to the Farm at about 7pm, and within about ten seconds of setting up alongside the northern end of Horse Pastures field, there they were - the female Whinchat (149) and juvenile Stonechat - perched next to each other in a hedgerow and showing well. 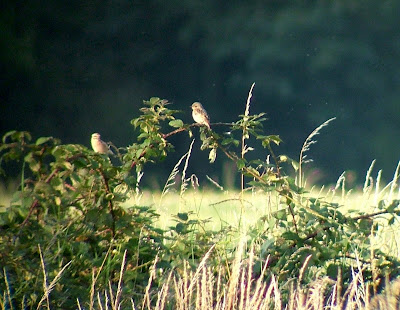 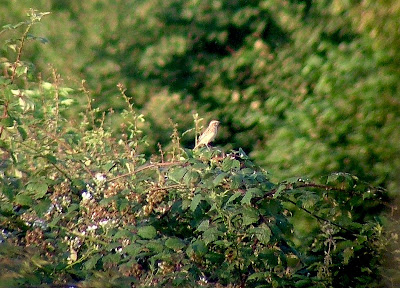 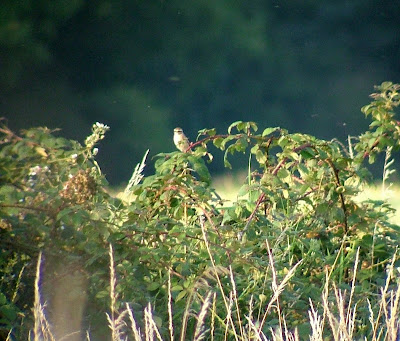 Two really nice birds, both busying themselves flying up to catch insects before settling down on a branch again. It was an enjoyable sight. The sun was warm and low on the horizon, the wheat fields smelt of summer - all was well with the world.

After a while I left and went over to Holmethorpe, where three Common Sandpipers and a Green Sandpiper had been seen on Spynes Mere and Mercer's West lake. I caught up with the Green Sandpiper but couldn't see any sign of the Common Sands. Not to worry, it had been a good evening and it does appear - from my perspective, at least - as if the world of Surrey birding has woken up from its summer slumber and it's now full steam ahead for the autumn migration.