It's not been a good week. Not enough work and too many bills, numerous 180-mile round trips to Hitchin to visit the mother-in-law in hospital after her knee replacement (I'm sure it was something else that needed replacing, but I can't think what...).

We went up to Hertfordshire on Sunday afternoon but didn't get far. Driving up Gatton Bottom Road, the lane that runs parallel with the M25, heading for junction 8 of the motorway at Reigate Hill, we had an accident. 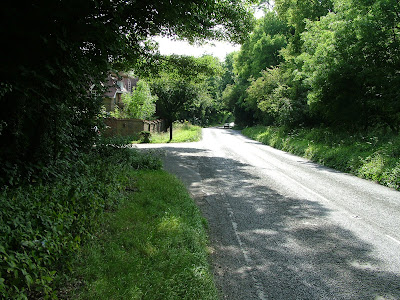 A car coming down the road was waiting to turn into a driveway on my side of the road, but for some reason decided to turn in just as I was about ten yards away from him. He then noticed I was there and stopped in the middle of the road. I was doing about 50mph. I could have just jammed on the brakes and t-boned his car - not a good option as his passenger would almost certainly have been hurt, so I locked up and tried to steer the car left, away from the stationary vehicle and towards the driveway. But he panicked and continued to turn in. 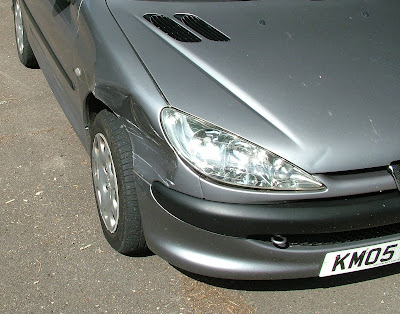 We inevitably made contact but it was only a glancing blow. Predictably, his car - well, his father's car - only had a scuff down the front grill and bumper, while mine had a stuffed front wing. He admitted it was his error. We were all a bit shaken. In the end we got away with it, because the car was still driveable. We carried on our way to Hitchin.

I was disappointed that I hadn't rescued the situation completely and that it had shaken me. Ten years ago, when I was editor at Motorsport News, I held a racing license and had raced at Brands Hatch and Lydden Hill in production cars, Legends Racing cars, Zip Formula single-seaters and the like. I had driven a NASCAR Winston Cup car around Rockingham Motorspeedway, near Corby. I had driven the British Championship-winning Hillclimb car of David Grace - which had a 750bhp Benetton Ford F1 engine stuck in the back of it.

I had also raced stock cars for a short time in the mid-nineties. I even had a two-seater F1 ride around the Misano racetrack in Italy with Fernando Alonso. Yep, that's right - the Fernando Alonso. So I was used high speed, and particularly with the stock car racing, to the knocks. But here I was, in a pokey Peugeot 206 diesel, having had the first shunt on the road since I passed my driving test in the early 1980s, sweating and a bit stunned by the whole thing.

I think it's down to preparation. In a racing car, you are hyped-up before you start and you know what to expect, whereas when an idiot turns in front of you for no apparent or logical reason, it is a bit of a shock.

So, that was Sunday. It is now Thursday. Nothing much to report on the bird front until this evening. The weather was sub-tropical for the first half of the week, but then had turned autumnal in the blink of an eye today. All week there have been some interesting birds dropping in at Beddington Farm, notably Wood Sandpipers and a number of Garganey. Last year, Holmethorpe had visits from both these species, but nothing this year up till now. I wanted to go to the Farm to catch up with the Wood Sandpipers at some point but couldn't find a window of opportunity. 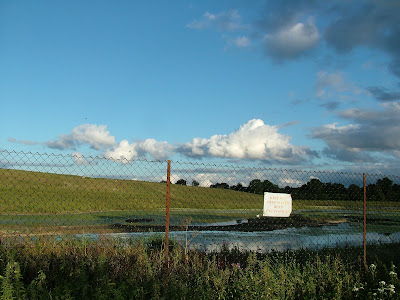 Then, this evening I had need to go to the Waitrose in Banstead, so I took a detour. Roger 'Dodge' Browne kindly gave me the location of a Wood Sand that had dropped in at Beddington today. It was probably still there, so I went for a look. Remarkably, this is the first time I've been to Beddington all year. I don't know why that is, apart from the fact that I haven't been birding half as often as I would like in 2011. 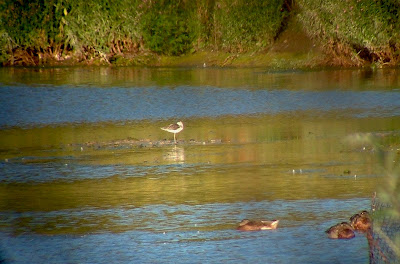 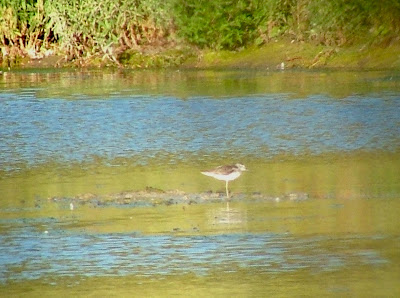 Thankfully, the Wood Sandpiper (150) was still on the southern lake, sleeping most of the time, but it was good to catch up with one. While I was there I also went to see the Tree Sparrows (151). These birds are a Beddington speciality - the only site in Surrey where you can find them. There were more than 20 Sparrows on the feeders, but as soon as I turned up, they flew off into the trees. They were making quite a din until a Kestrel ghosted through and it all went very quiet. And that's how it stayed.

So, that was it for the evening. Another visit to Hitchin is on the cards for tomorrow (whoopeedoo), and then it's my birthday on Sunday. I'm planning a visit to Elmley Marshes or somewhere similar, expecting to see plenty of great birds - here's hoping...