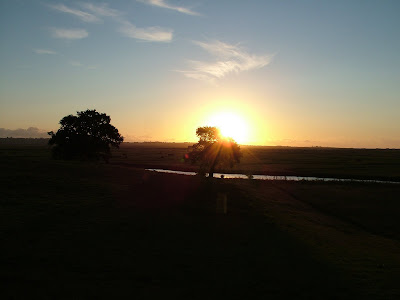 The alarm went off at 4.15am and I was parking at Elmley Marshes on the Isle of Sheppey by 5.40am. It was a beautiful morning as the sun broke into view above the horizon to announce the beginning of August 7, 2011.

I'm now officially 52 years old. It's going quickly this decade. It only seemed five minutes ago I was starting my first job after leaving art school. That was in 1982. Ten years later I was married. That was 19 years ago this month. Where are all the years going?

Annie told me to go off and spend the day how I wanted - which was a full day's birding, obviously. I would get home later to be rewarded with a feast and plenty of wine. Perfect.

I chose Elmley as my main stop as it has had a decent run of interesting birds recently, and it is only 50 minutes from Redhill. I didn't want to spend half the day in the car. There wasn't a soul about when I arrived - I basically had the whole place to myself.

On the walk down to the hides, which is about a mile and a half trek, I came across plenty of Yellow Wagtails but the was no sign of the juvenile Purple Heron that had been seen up to 11.30am the day before.

At the Reserve itself, all was fairly quiet. Most of the birds there were sleeping, including 17 Little Egrets on the rocks alongside the Swale Estuary. There were a few Avocets, as would be expected, but few waders around apart from some Common and Green Sandpipers. No sign of the Spoonbills that had been visiting regularly during the summer, but I spotted a male Garganey preening itself while it dozed. 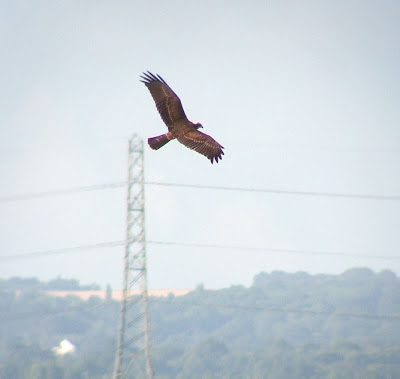 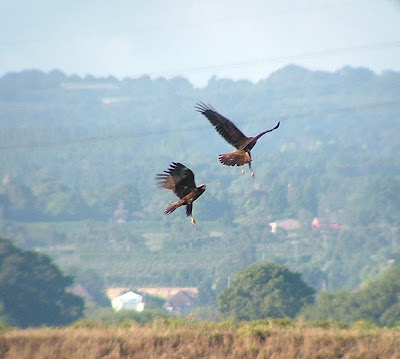 The best sight was that of two female Marsh Harriers hunting over the marsh. They put on quite a performance in the stiff wind, causing quite a stir with the resident waders, who constantly flew up to intercept them. The two harriers were successful in finding some food, although I couldn't make out what they had caught. 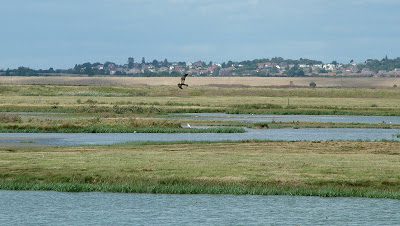 During the day I saw at least five Marsh Harriers around the area, plus a Peregrine and a couple of Kestrels.

During the walk round I also came across five Wheatears. The autumn migration has well and truly got underway. 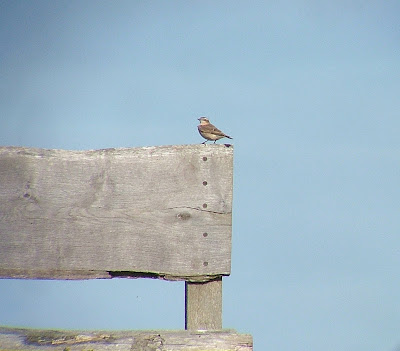 As there wasn't much going on at this point, I decided to head back to the car and set off for Oare Marshes, to see if anything interesting had turned up there.

I wish I had stayed put. No sooner had I got to Oare and began to walk along the lane, heading for the sea wall, when I stumbled in a pot hole and hit the deck. Camera, binoculars and scope all crashed to the ground. I ripped my jeans and grazed my leg. The camera and bins were OK, but the scope was damaged. The screws that hold part of it together had sheered and some of the internals had come loose. What an idiot. Of all the days for this to happen. I felt like going home. 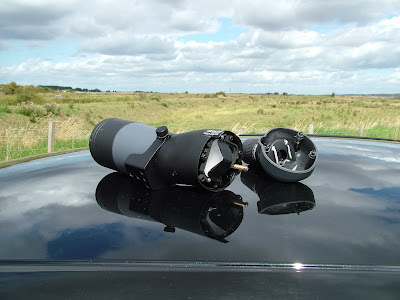 I rang home and explained to Annie what had happened. Once I had gained my composure again, I decided to make the best of it and carry on just with my bins and camera. Still in a bit of a daze, Oare came and went without much to report, apart from a heavy storm that swept through. There were a few Yellow Wagtails dotted around and the usual waders on the flood (Black-tailed Godwits, Knot, Redshank, Greenshank, etc). 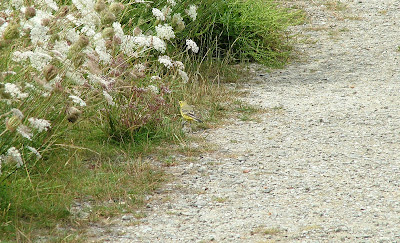 So, I set off back to Elmley. After waiting for another heavy shower to pass over, I headed off back down the path just after 1pm. The sun came out. It was then I noticed something moving out across the flats, alongside a ditch near where a herd of cattle were grazing. The tall bird walked along a fence and then flew up and perched on top of it. It was the juvenile PURPLE HERON. What a stroke of luck! It was annoying that I didn't have the scope to look at it, but after working my way across the grass I got a better view. It was the first time I had seen one - I'm not the seasoned birder - so this was a boost. 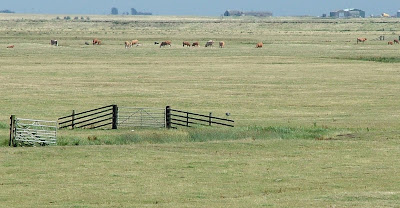 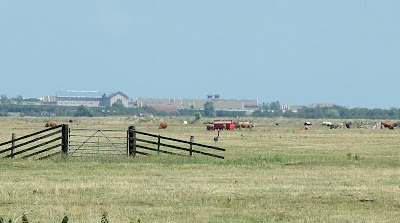 Within a matter of a few minutes it dropped back down again into the ditch and out of sight. I immediately reported it to Birdguides, and within half an hour it was up on Rare Bird Alert with a blue triangle on the map. As far as I know, I was the only person to see the bird all day - a perfect present and compensation for the events a couple of hours earlier.

The rest of the day was fairly uneventful - the Spoonbills never materialised - but it had been enjoyable nonetheless. I was going to set off for Banstead late on to see if I could find a Firecrest - David Campbell had texted me to say he had seen one in Banstead Woods - but it was getting late, and to be honest, I was totally knackered by then. Excellent food and wine shared with Annie was a far more alluring proposition.
Posted by Factor at 22:26