A Hoopoe was sighted at Farthing Downs, south of Coulsdon on August 14th, but was only announced the day after. So, like many other local birders, I didn't take much notice as it was most likely heading off across the Channel by the time anyone bothered to venture over to the area to take a look.

Then yesterday afternoon, Johnny Allan tweeted that the bird had been seen again. He made his way over with Dodge and David Campbell in tow and they all got on to the bird pretty soon after arriving. It was still visible at 5.20pm. I headed off as soon as work was over for the day, and was parking up just after 6pm.

That afternoon, I had a go at fixing my written-off scope. There wasn't much to lose in trying. I managed to unbend the focusing thread, and used some Bostick to stick down the prism and some tape to hold the body together. Amazingly, it worked.

I was hoping to find a throng of people all lined up looking through scopes at the Hoopoe, which would be posing perfectly a few metres away. No such luck. There were a few birders around, all wandering around the site with looks of resignation on their faces. Among them were Alex Bowes, Andy Pickett and Roy 'Bulldog' Dennis.

We joined forces and scoured the area, but found nothing, apart from umpteen Wood Pigeons. By 7.45pm I gave up for the evening and planned to come back in the morning.

I was back at the Downs at 6.00am. Andy Pickett was already there. For the next two hours I trudged around the area, looking along all the grass footpaths in the hope of seeing this bird. I found a Whinchat, which was nice, a Bullfinch and loads of Linnets and Goldfinch, but no Hoopoe. Andy left.

I then bumped into the guy who discovered the bird in the first place. He had been standing about 200 metres away from me when he found the Hoopoe on the footpath. A dog walker had inevitably flushed it and it flew off into the valley and behind some trees. I hadn't seen a thing, as I was looking the other way. At least it was still around.

Graham James and Paul Kerry then arrived, as did Roy Dennis. We went searching for another hour or so, and still couldn't find it. I was aware of the time and the knowledge that I had work to do, so I gave the area just one more look before heading home.

As I was heading for the car park, the phone rang. it was Roy. "Look to your left," he said. I looked and there he was with Graham and Paul, plus another birder, on an adjacent footpath, all looking intently through binoculars back down the path.

The Hoopoe had flown over Roy's head and landed in front of him on the path before moving into some longer grass, where it remained hidden. I scuttled over. A herd of cows eventually flushed it out, and for the first time in Britain, and Surrey in particular, I had my first view of a Hoopoe (153) in flight. It had taken a total of five-and-a-half hours, but it had been worth the wait. 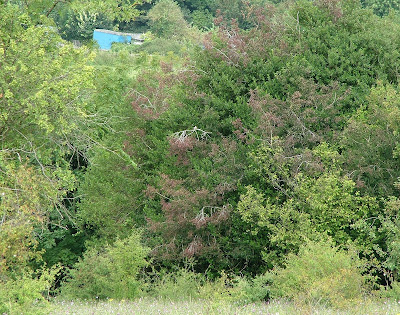 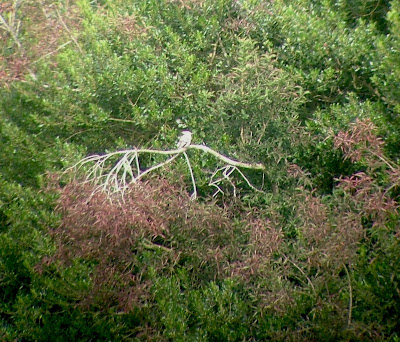 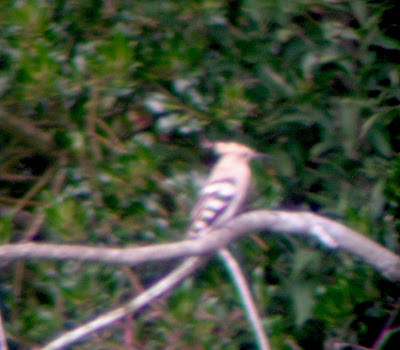 The Hoopoe flew down into the valley and landed in a tree, where it showed well for a few minutes. The bird raised its crest as a walker came past, and it was in the air again, heading west. It went missing briefly, before it flew back and dropped down on to the lower footpath. As we approached it, it took flight again, and this time it disappeared over the other side of some trees.

Having seen it a last, it was time to head off. The only other Hoopoes I have ever seen were when on holiday in Tuscany many years ago, so it was great to find one so close to home.