Late on Saturday Annie and I went over to Farthing Downs. Annie just wanted a bit of late afternoon sun, while I wanting to go and pay the Hoopoe another visit. We arrived just after 6pm, and it was balmy evening with not a breath of wind. The Hoopoe had been seen earlier that afternoon - for the seventh day in a row - so I knew it was still about.

Annie went in search of a park bench with her book, while I trekked off in search for the latest birding star of Surrey. I bumped into a couple of birders soon after setting off. One hadn't seen the Hoopoe and was clearly in a bad mood. He turned up just as a Crow had mobbed it and it had flown off to the east, on the other side of Ditches Lane. The other guy had seen it close up, having flushed it off the footpath - it had only flown a short distance away. He seemed happy enough.

After a quick look on the eastern side of the lane, I headed over to the usual spot, the middle path. Sure enough a group of birders were peering through scopes and bins. One of them beckoned me over. It was Andy Pickett, who was watching the bird along with his girlfriend Nikki. 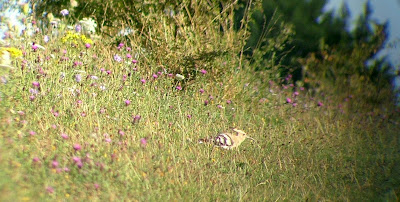 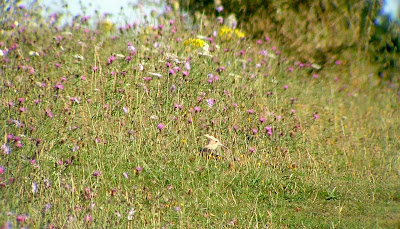 The Hoopoe was feeding contentedly on the side of the path in the longer grass, pecking frantically for insects. Occasionally, something would spook it slightly and it revealed its crest. It stayed in the same spot for a good half an hour, although it didn't emerge completely from the undergrowth until a group of walkers got close, and then it paused in the middle of the path before flying off into the trees just after 7pm.

As far as I know, that was the last time it was seen, as there were no reported sightings today. It has been a real treat while it lasted.
Posted by Factor at 22:46