WOOD YOU BELIEVE IT!

After proudly announcing I had seen a Wood Sandpiper at Beddington a few days back, I now have to eat humble pie and admit that the bird I saw was probably a Greenshank. There, I've said it. It only goes to prove how easy it is for a relative novice like myself to become influenced by what I expect to see.

I knew a Wood Sandpiper was there, so I convinced myself that the bird I was looking at was one. After I had written my post and published it, the nagging doubts started to eat at me. No matter how often I looked at the terrible photos on the post, and kept looking at Collins and Google Images, I just couldn't convincingly morph the likely Greenshank into a Wood Sandpiper.

It was a schoolboy error. A Greenshank, of which I have seen many, is a larger and leggier bird than the Wood Sand. And then, just as I had decided just to run with it and go back and get another sighting just to confirm I'd seen one, David Campbell delivered the coup de grace. He left a message on the blog explaining that he felt the bird in the photo was a Greenshank. After a couple of email messages to and fro, I had to admit defeat.

So, I was back to square one. I needed to go back to Beddington at some point. After trashing my scope on the 7th, I dashed up the A217 late this afternoon to Kay Optical in Morden to see whether my Opticron was salvageable. Unfortunately, I was told it really wasn't worth fixing and the cost of the repair would be far better used to buy another one.

On the way back home I took a diversion over to Beddington. Earlier in the day Johnny Allan had posted on Twitter that three Wood Sandpipers were still present, plus a Garganey, a Black-Tailed Godwit and five Greenshank. I found one of the Greenshank on the south lake, plus the Black-Tailed Godwit (151). You see hundreds on the coast, they are two-a-penny, but seeing of one in Surrey is still a head turner. 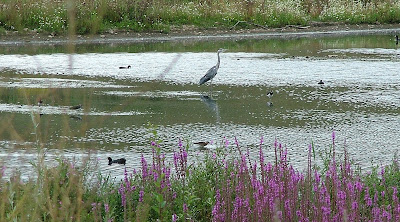 I couldn't find a Wood Sand at first, but after a walk around the perimeter up to 100-acre lake, where I saw a couple of Green and a Common Sandpiper, and a Peregrine Falcon circling overhead, I ventured back via the feeding-frenzied Tree Sparrows for one last go on the south lake.

After catching sight of the Greenshank again I realised there was a smaller wader following closely behind - at last, I can genuinely confirm I can tick a bona fide Wood Sandpiper (152)! I moved along the fence to get a better view but I couldn't relocate it again.

I also couldn't find the Garganey - to be honest, it is hard to see much on the main lake with just a pair of old binoculars - so, it was time to go.

On the way home I dropped in at the local patch. Graham James had emailed me to let me know that a Spotted Flycatcher, seen a few days earlier, was still in the area, being spotted again along the pathway on the south side of Spynes Mere. The Spotted Flycatcher is developing into my bogey bird of the year. I just can't find one. I didn't see this one either.